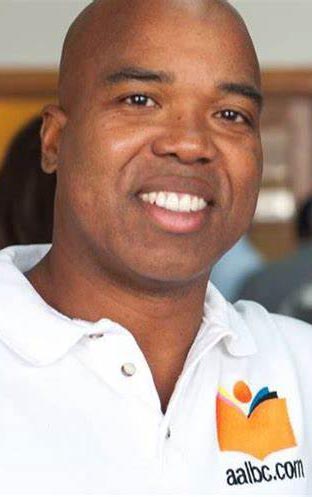 At first, Troy D. Johnson wanted to sell books for commissions under Barnes and Noble’s Affiliate Program. He would place that bookseller’s products on the website he created, with links referring customers to BN.com.

It didn’t take long for him to feel the inadequacies of the program. Hoping for better luck, he signed up with Amazon.com’s affiliate program. All went well until Amazon’s commissions became smaller and smaller.

For Johnson, a former GED teacher and adjunct professor in New York City, what, then, was the point of selling Amazon’s books?

He decided to go the advertising route, soliciting paid ads for his site. That, too, went pretty well for a while. Then the world started to go digital. Big companies like Amazon began to dominate the book-selling market, and it became harder and harder for small independent businesses like Johnson’s to thrive.

This month, in spite of that dominance, Johnson’s African American Literature Book Club celebrated its 24th anniversary, acclaimed as the oldest, largest and most frequently visited online bookstore dedicated to African American and Black literature from around the world.

Offering book publishing, film reviews, and a range of resources and services for authors and publishers, AALBC has more than 4,800 profiles of Black authors and illustrators from the US, Africa and the wider African Diaspora in every book genre.

Johnson now resides in Oklahoma. He spent time with TNJ.com reflecting on AALBC and the environment for small, and particularly Black, booksellers.

Johnson: Amazon is one of the wealthiest companies in the world. They engage in predatory pricing and sell books at a lower cost. This is a tactic to kill competition with smaller business owners, especially Black-owned. It is getting to the point where the publishing industry is really coming under the control of powerful companies.

No publishing company is selling more books than Amazon. Amazon has the ability to take a writer’s manuscript directly from the writer, create a book, an E-book and/or audiobook and promote it on numerous platforms. Not only are they producing the books, but they also are selling and delivering them at a fast pace. When consumers look online and see the discounted product and fast shipping with Amazon, there is no other business that can compete.

TNJ.com: What services does AABLC provide that corporations may not?

Johnson: We provide a personalized service. Readers will either hear from me personally or a representative with a confirmation email of their purchase. We follow up with them to get to know their preferences in literature and recommend books and authors.

TNJ.com: In the past year, when did you see the most sales?

Johnson: After the murder of George Floyd and Breonna Taylor, there was a peak of white people buying anti-racism books. They specifically wanted to buy from Black-owned businesses and many Black owners did well in sales.

Eventually, big companies like Amazon and bookshop.org started to benefit from exploiting Black-owned businesses. They took over online sales and gave booksellers roughly 30 percent of their profit. That is tremendous benefit for those who may not be able to provide services that the big operations can. But the downside of working with these big companies is they tend to know a tremendous amount of information, such as customer and sales data; there isn’t always a guarantee they will always give a 30 percent profit; and the small booksellers tend to become more dependent on them.

TNJ.com: There was a saying that if you want it hide something from Black people, put it in a book. Where did that come from? Is there any truth to it?

Johnson: I have never heard that saying, but I’m sure it relates to all people, not just Black people. We as people don’t read enough. Reading is a pleasure! We get too caught up with work and just life in general. It’s hard to maintain a hobby like reading.

TNJ.com: Are physical bookstores gone for good or will they make a comeback?

Johnson: Even before the pandemic, there were fewer physical bookstores. And I’m not talking about a coffee shop, like a place where you could speak to a worker and they can refer you to your ideal book. The way companies like Amazon have a hold on the publishing industry, booksellers are having a hard time competing and are forced to closed.

I was able to survive for so long due to support from long-term clients and my community. If people do not stop shopping with Amazon, Amazon eventually will be the only place we can get books from.

TNJ.com: Where do you see AALBC in the next five years?

Johnson: Within the next five years I hope to see AALBC more known in the Black community.  I hope there is a high inspiration of Black writers creating literature for our community, documenting the good and the bad. By that time, we should have already partnered with people who are truly in love with reading and have knowledge of books. I remember, just 24 years ago, I was able to cover all of the published Black literature and now there is no way I can keep track. Hopefully, that will continue.

Young Developer Kaya Thomas Says Coding is a Business Must