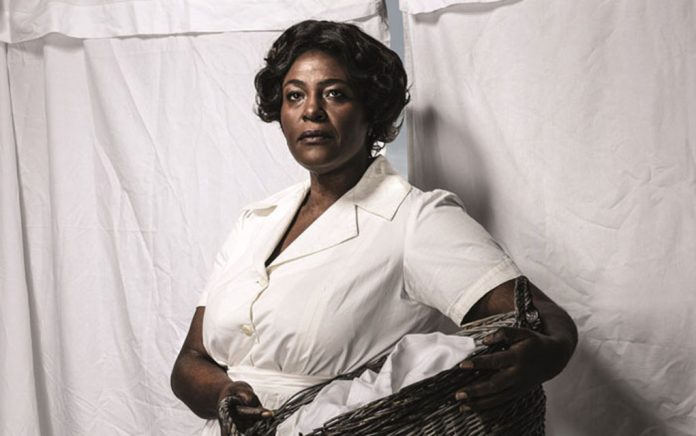 These are just a few of the expressions media and theatergoers alike are using to describe the revival of the play “Caroline, Or Change.”

Currently running in a limited engagement at Broadway’s Studio 54 Roundabout Theater in New York City until Jan. 9, the musical production has been getting rave reviews.

It’s a dynamic and intense story of a disenfranchised single Black mother working as a maid for a Jewish family in 1963 in Louisiana. Created by Pulitzer Prize winner Tony Kushner and Tony Award winner Jeanine Tesori, the issues of the play are incredibly relevant today.

“You know, ultimately, ‘Caroline’ is a story about sorrow and anger and grief. It’s talking about a time when you know there’s the burgeoning civil rights movement, the assassination of JFK, there is change sweeping the country,” says Sharon D Clarke, who plays the lead role of Caroline Thibodeaux.

She continued, “And here we are in 2021 with change sweeping the country again. We’ve had the Black Lives Matter movement and George Floyd’s murder. And you know, we are in the midst of talking about change. Caroline deals with change and all its levels. So I hope that when people come, they can see a reflection of our society and what is happening in it, what has been happening in it, what is still happening in it, and how we move forward to change that, and move from change – not just talking – but into action.”

For Clarke, it was refreshing to bring her character’s story to life. “It’s very rare that you see someone of Caroline’s statue at the center of a story being told. I wanted to be a part of that,” she says.

Clarke was born in London to Jamaican parents who were childhood sweethearts. Her parents moved to Britain in the 1950s.

“Sharon brings such a unique dynamism and power to the role of Caroline Thibodeaux,” says Anna Morton, the literary manager for Roundabout. “Oh, and seeing her on stage, I mean, I don’t even really have words for it. It’s completely a wonder to behold.”

“It’s a wonderful musical,” says Clarke. “It’s a musical that, for me, is more an opera than your archetypal musical in that sense. And the music is as sweeping, melodious, harmonic as there is.”

Clarke hopes this revival hits home and strikes a chord for people to make their own personal change.

“If it’s a subject that is coming to you for the first time, you will be enlightened; you will be enriched; you will see a slice of life that you normally don’t see on a stage,” she states. “To have a Black woman who is a maid be the main character is not something you often see on the stage.  [Normally] she would be a peripheral character. She’s not someone that you would get to know. But you get to know this woman. You get to know her everyday trials.”

The story will envelop you, says Clarke.

“I just hope people are moved. I hope people are stirred by the story, by the music, by the emotion, and I hope that they think about how far we’ve come, what we’ve been doing to get here, what we’re still having to do to get to the point where there is equality and diversity and inclusion.”