Home Lifestyle Arts & Entertainment Your Guide to ‘Hamilton: The Exhibition’ in Chicago: Will it Succeed? 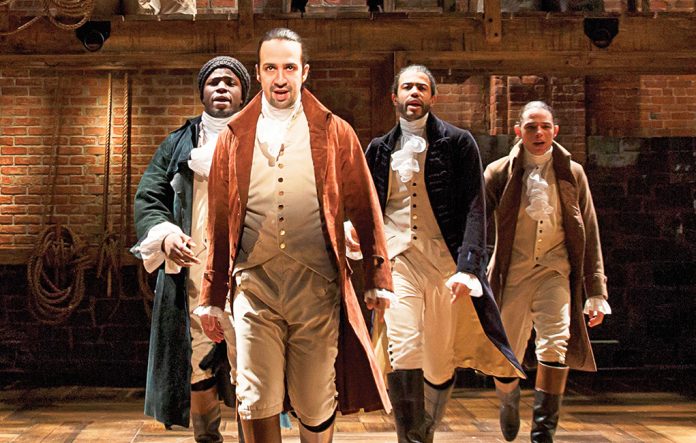 Can the famously smart and creative minds at Hamilton Inc. pull off their biggest gamble yet?

With the acclaimed visual designer David Korins spinning the artistic roulette wheel, the brain trust of the most successful Broadway musical in modern history have picked Chicago for their huge new wager on brand extension and title recognition.

Will the millions of “Hamilton” fans across America and the United Kingdom come in their droves, not to a hit Broadway musical, but to an interactive, experiential and immersive exhibition centered on the life and times of Alexander Hamilton, Founding Father, zealous promoter of the United States Constitution and the first Secretary of the Treasury?

And will they do so not at an established museum or educational institution or even next to where the show is playing, but at a huge, bespoke, temporary building of some 35,000 square feet, constructed close to Lake Michigan on Northerly Island, once the home of an airport for elites and, in inclement weather, as wild and windy a spot as the Windy City has to offer?

If they do — and the first solid indication of whether the exhibition can attract the hoped-for 400 people per hour will come in the days following the April 27 opening — they’ll drop additional funds into the “Hamilton” coffers, since “Hamilton: The Exhibition” is a for-profit entity produced by Jeffrey Seller, the astoundingly versatile original producer, and is the work mostly of the show’s original creative team — a group that includes Korins, the gifted orchestrator Alex Lacamoire, regarded by many as a mostly unsung genius, and the project’s ever-rising founding father, superstar and master of communications, Lin-Manuel Miranda.

If they don’t, then Seller and his investors will be out tens of millions, certainly more than the cost of a whole separate major Broadway musical. And while “Hamilton: The Exhibition” is designed to move to other cities, most likely places such as San Francisco and London where the show has paved its way, its passage will be neither cheap nor easy. In each market, it will need to sustain itself for several months.

No Broadway show ever has attempted anything like this — and certainly not some 800 miles from Midtown Manhattan. Then again, no Broadway show ever has put in motion the same kind of educational imperative as “Hamilton,” a show that has created a non-profit arm to reach under-served students and that features a creative and producing team that are probably the most mission-based group of people in Broadway history. Along with politically savvy father Luis, Lin-Manuel Miranda not only enjoys incomparable amounts of public goodwill but consistently has brokered his colossal celebrity (and Twitter following) in service of progressive causes close to his heart — from the well-being of Puerto Rico to the survival of the Drama Book Shop in New York. To a large extent, “Hamilton the Exhibition” will allow this group to expand their identity as teachers, activists and public intellectuals dedicated to educating Americans about the early years of their own nation, and all the myriad questions that famous act of rebellion posed.

And, of course, “Hamilton: The Exhibition” is only possible because of the subject matter of the show. This is a musical about the founding of America itself and it has historiography baked into its very identity. It has embraced (and enriched) historians from the start: the show was based on Ron Chernow’s best-selling biography of Alexander Hamilton and Miranda’s dramaturgy embraced the idea of multiple points of view. Thus this newest enterprise has been built with the consulting help of blue-chip historians, most notably Joanne Freeman, a Hamilton expert at Yale University whose presence and pedagogy has been pivotal to the development of a narrative that will guide patrons through environments that re-create historical locations (St. Croix, say, or New York City’s harbor or the famous duel site of Weehawken, New Jersey) coupled with more fanciful rooms and experiences grounded in history but based on ideas (the assumption of state debt, say, or the creation of the electoral college). Exhibitions based on other shows would either have to be backstage explorations or superfan-friendly events; in most such cases, people surely would just prefer to see the show.

But “Hamilton” is able to use popular culture — the Broadway musical — as an entry point to promote the worthiness of American history. If it works, it will be a seminal moment that will make maybe the best case ever for the potentially powerful role of the arts in K-12 education.

The not-so-secret weapons? They’re the music, lyrics, characters, stars and scenes from the show itself.

Care has been taken not to confuse “Hamilton: The Exhibition” with “Hamilton,” the musical. There are no backstage tours nor human actors. No one will sing live. There will no storytelling of the show’s trajectory. No memories of rehearsal, There are books for that. But you will never be far from the show. In the end, it will surround you.

For while there have been other explorations of artifacts surrounding Alexander Hamilton that have piggy-backed on the current wave of his popularity, only “Hamilton: The Exhibition” has authorized access to this material. The show’s lyrics will be on the walls, sitting alongside actual quotes from the main himself. Lacamoire has re-orchestrated and re-recorded an instrumental version of the score, likely to be of great interest to fans of the shows. And, of course, Miranda’s voice is to be the lead guide to the whole experience, joining with actors from the original cast. In person, he’ll be one of those cutting the ribbon at the April 26 opening and, the following day, he’ll be welcoming the first guests. But his image will be there the whole time.

Everyone involved here is hoping that many of the two million people who have seen “Hamilton” in Chicago (or elsewhere) will return for a deeper dive, and that those who found the show too expensive, or too difficult to access, will want to spend some more affordable time with Hamilton Inc. And then maybe they’ll also want to see the show.

That’s the business angle. And not far from where George Lucas wanted to build his own permanent museum, Chicago gets a substitute attraction from a similarly powerful international cultural brand. And since “Hamilton: The Exhibition” is temporary, it avoided all the grief.

So. It’s curtain up on a whole new thing. “Hamilton: The Exhibition” will begin with the early life of one of the most illustrious of Americans, a man brimming with ideas who finally learned that all the power in the world cannot assuage for the loss of your own child.

Maybe this new attraction in Chicago — where too many children are lost — will teach us that too.

Superfan Maya Rudolph Remembers Prince: ‘He Was a Perfect Musician’

An Evening of Jazz and Reparations