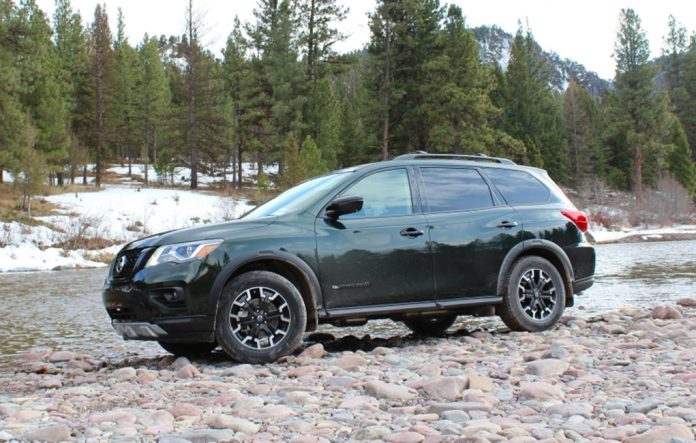 It’s not unusual to look back at our youth and wish we were young again.

Certainly, someone at Nissan is feeling the pull of nostalgia, at least when it comes to the Pathfinder. For in its younger reckless days, the Pathfinder was an off-road terrain-chewing tough guy.

This disappeared for the fourth-generation model. Its personality slipped away as it traded unpaved trails for pokey parkways. This trend continued with the 2017 redesign, as the Pathfinder became a bit blander. For those who remember the Pathfinders of yore, the new model was the same thing in name only.

Yet with the arrival of the optional Rock Creek Edition Package, the Pathfinder is attempting to reclaim some of its former glory. Cue the mud bogs.

If this doesn’t exactly make you want to tackle some off-road trail, it does visually toughen the Pathfinder’s appearance, even though it doesn’t otherwise change its thoroughly suburban driving persona. Not that’s there’s anything wrong with that.

If any word summons up the Pathfinder, it’s uneventful. Here, the best surprise is no surprise, as the Pathfinder provides a satisfactory supply of smooth power, while the continuously variable transmission proves to be fairly responsive, even if it does drone annoyingly at highway speed. And there’s a fair amount of road and tire noise over the roughest road surfaces, but it otherwise proves to be quiet. The Pathfinder’s light, numb power steering and generous body roll clarifies this vehicle’s true mission as a family sled. Nevertheless, there’s enough moxie to tow 6,000 pounds of your favorite plaything.

You’ll find the cabin spacious in the first two rows; the third row is best left folded; only those you hate should have to sit back there. Material quality is fairly good, and there were many comfort and convenience features, including such niceties as tri-zone automatic climate control, a heated steering wheel, heated seats and a hands-free liftgate. Ventilated front seats are only offered on the Platinum model. A full-color, eight-inch touchscreen is standard, but the user interface is archaic and radically overdue for modernization. This also means you won’t find Apple CarPlay and Android Auto capability, and a 4G Wi-Fi connection is available as a dealer-installed option.

One hiccup occurred when a punctured tire made itself known first thing in the morning. A quick trip to Performance Nissan in Pompano Beach, Fla., did the trick. Service writers took me right away despite the lack of an appointment, and technicians plugged the tire within an hour. It was positively painless and proved an unexpected and surprisingly easy experience.

While the Rock Creek Edition lends the Pathfinder a dash of stylistic attitude, it’s a long way from the attitude the Pathfinder possessed in younger years, having matured into a rug-rat wagon. But it does offer enough to be a satisfying choice for those looking for a pleasing family vehicle that’s easy on the eyes.

How are condo associations handling increases in utility costs due to electric cars?