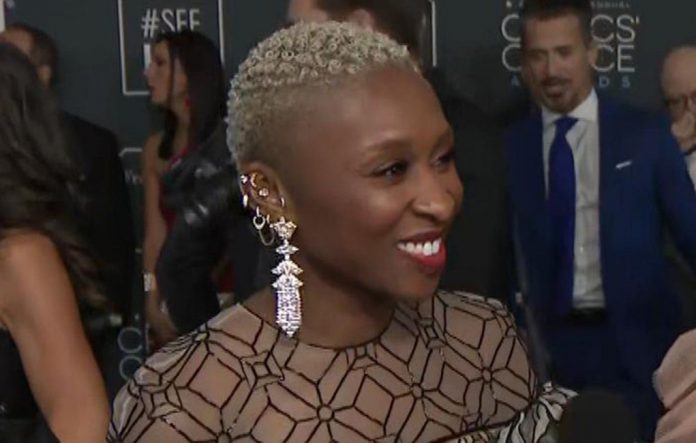 British actress Cynthia Erivo was nominated for her first Oscar on Monday morning for her performance as the iconic freedom fighter and abolitionist Harriet Tubman in Kasi Lemmons’ “Harriet.”

The stage and screen actress (along with powerhouse singer — she is also nominated in the original song category) also earned Golden Globe, SAG and Critics’ Choice nominations for the role. And while BAFTA controversially snubbed acting nominees of color entirely, the ceremony still asked her to perform (she declined).

“Harriet,” distributed by Focus Features, exceeded box office forecasts when it opened in November, debuting to $12 million on its way to $43 million to date in global ticket sales. It marks the first feature leading role for Erivo, who stole scenes in 2018’s “Widows” and “Bad Times at the El Royale.”

She was first approached about “Harriet” while in the midst of a Tony-winning turn in the Broadway production of “The Color Purple.” The production is also responsible for her subsequent Grammy (for the cast recording) and Daytime Emmy (for a cast performance on NBC’s “Today”) wins. (For those who don’t want to count Daytime Emmys in EGOT status, Erivo will also headline the upcoming limited series “Genius: Aretha” for National Geographic. And playing music singer Aretha Franklin could put her in Primetime Emmy contention as well.)

“I think in doing (‘The Color Purple’) I realized that that’s really what I want to do — keep telling stories about women of color who were full and rounded,” Erivo told the Times in November.

Erivo is just the 11th black actress to be nominated for a leading role at the Oscars in the ceremony’s 92-year history. Should she win, she would be just the second black woman in history to take home a lead acting Oscar, following Halle Berry’s 2001 win for “Monster’s Ball.”

Even if she only wins in the original song category, the 33-year-old would become the youngest EGOT winner, one of just 16 people who have reached the coveted milestone and the fastest, having collected all four trophies in less than four years (current record holder Robert Lopez took 10 years to achieve the feat and completed it at age 39).

This year’s Oscars will broadcast live from Hollywood’s Dolby Theatre on Feb. 9.