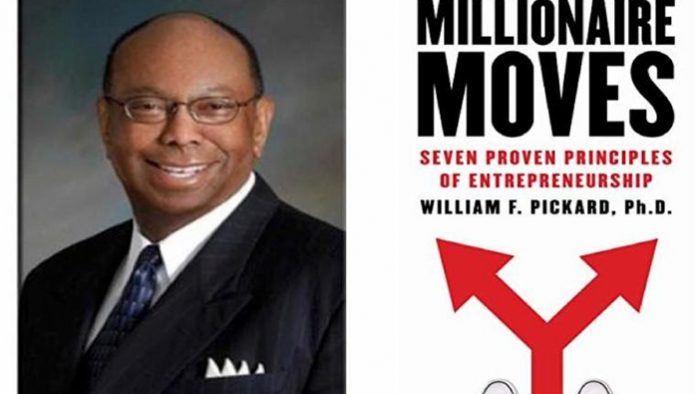 In his new book, Millionaire Moves: Seven Proven Principles of Entrepreneurship, celebrated businessman, philanthropist and lecturer William F. Pickard, Ph.D. wants people to become the entrepreneurs they dream of being. Through seven principles such as finance, relationships and talent & skill set, Pickard advises, masterfully yet humorously, while sharing his own journey. Millionaire Moves reads like a practical guide complete with an Appendix that breaks down ?What to Do,? ?What You Need,? ?Steps to Action,? and ?Where to Learn More,? in order to make each of the seven principles work.

Chairman of Global Automotive Alliance, Co-Managing Partner of MGM Grand Detroit Casino, CEO of Bearwood Management Company and Co-owner of five African American newspapers, Pickard is rooting for you on these pages. A fun, never stuffy, must-read for anybody looking to work for themselves. Milennials will love it.

Here, Pickard spoke to TNJ.com about lessons in entrepreneurship.

TNJ.com:? What inspired you to write Millionaire Moves?

William Pickard: I?ve spent the past 45-50 years of life as an entrepreneur. I also have a PhD and love education but, most importantly, I?ve been teaching for 20 of those years at different colleges. I?ve spent two of those years teaching at the University of Michigan School of Business, but recently, I started roaming around to Black colleges, teaching in the spring semesters. I had never attended an HBCU, and I began to discover these young men and women who were hungry for business because a lot of them came from small towns where the local black business image was a bill collector, the guy who ran the corner store, and maybe someone else.

Now, when I visit colleges, I fly in friends of mine to lecture. They are mostly successful businesswomen and men, and students get to see images of black business people like they have never seen before. So, that led me to start putting together these concepts of entrepreneurship and I think that?s what we?ve done in writing this book.

TNJ.com: The book is broken down into seven principles that can potentially help one attain entrepreneurship. Is there one principle in particular that you think will resonate with readers more than the other principles?

W.P.: I?ve been hitting the college scene a lot with the book. I open the book, for example, with the rapper Drake who says, ?If you work very hard, one day your idol will be your friendly rival.? You?ve got to put the work in. Rapper/producer Dr. Dre said, ?I have been in this business for 27 years, and there have only been two weeks that I did not go to the studio.? That?s putting the work in. So, we start the book off with that concept, that principle of putting the work in.

I also put a lot of emphasis on vision. It sounds like pop psychology, but it?s real. You will never be what you can?t see; you must visualize what you want to actualize. Then I cite the example of Madame CJ Walker in the 1870s. Even though she lived in a shack, she and her daughter had a vision board. Then I offer a quote from rapper Jay-Z when he was 18 years old living in the Marcy projects. He said, ?Your vision must be greater than the window you?re looking through.? So, of all of the principles I mention in the book, vision and attitude are very, very important.

TNJ.com: National Urban League President and CEO Marc Morial said of the book, ?Pickard?s career as an entrepreneur and businessman is a true American story of success achieved through perseverance, determination and a keen mind. His successes as a businessman and entrepreneur are matched by his passion and commitment to serve his community and to mentor to young people. His book is a must read for anyone who wishes to learn the lesson of how to do well while also doing good.? For people who have achieved the kind of success and wealth that you have, how important is ?giving back??

W.P.: I have three things I believe in: you learn, you earn, and you return. Return could be writing a million dollar check or a hundred dollar check.? It could be volunteering for a little league baseball team or the church. But all of us have a moral responsibility to return, to help and to share.

TNJ.com: How has the book been received so far?? What kind of feedback have you been getting?

W.P.: Mostly positive; we’ve made the Amazon bestseller list, and on college campuses, my sweet spot, we?ve had tremendous success. We were at Tennessee State University last month and we had 700 people in the audience. It?s heart warming to me to know that in spite of all of these challenges that we face in our community, these young men and women are hungry. There was one young man who said ?I am graduating next month and I don?t want a job; I want an opportunity.? He said he watched his dad work 23 years for a company and one day they tapped him on his shoulder and it was over. He said he watched his parents make adjustments to their budget in a home they had lived in for 29 years. They lost that house. He said, ?So, I?m going to bet on myself; I?m going to work for myself.? My God.

TNJ.com: I know you have several successful businesses under your belt. Is there one business experience in particular that has had a big impact on your career or has changed the way you do business?

W.P.:?? There is a thing in entrepreneurship called harvesting. So, I sold one of my largest businesses in 2015. But this business was started 21 years ago in the heart of the city Detroit called the empowerment zone. We made plastic, fuel delivery systems. At that time, it was a new technology, a new process. People called them gas tanks. But no, it was a fuel delivery system (in case we got sued!). When I started that venture, I was on a billboard, and I was a pretty well-known business success yet I could not get financing from anywhere. The code word I was given by a colleague was, ?Pickard, you are dealing with too many Ps. You have a new plant, a new product vest, a new product and different people.? By that, he meant Black people in Detroit.

In the 20-something years we ran that business of fuel delivery systems, we never had a recall. Never. And that damn near brings tears to me because those Black folks understood that we were a test. I am very happy to say that when I sold the company, everyone there was able to keep their jobs and they?re doing even better now because the company is expanding, etc. So that experience was the highlight of my career.

The emotional highlight is this: I love Black history and Black newspapers, and I?ve always had a fascination with the Pullman porters who delivered the papers such as the Pittsburgh Courier.? At one time, that newspaper was like USA Today. It was all over the nation.? So when we bought the Pittsburgh Courier, the Chicago Defender, the Michigan Chronicle, and the Atlanta Daily World, we saved Black institutions. Unfortunately, we?re not making a lot of money but emotionally and historically, that?s the part of my ?giving back.? We have kept these institutions alive, we have most of the archives, that hopefully and prayerfully someday we can have them for scholarship for professors or community people.

TNJ.com: When you do seminars and classes about entrepreneurship, is there a recurring question or issue that people seek advice on??

W.P.: Yes, they ask, ?How did you get the money to get started?? In my book, I say money is probably the easiest principle there is. Most bankers and most venture capitalists do not bet on the horse; they bet on the jockey. How bad does she or he want it? How much does the person have a commitment to excellence? Is she willing to work 8 days a week, 25 hours a day?? You bet on the jockey.

TNJ.com: What do you hope readers will learn from the book?