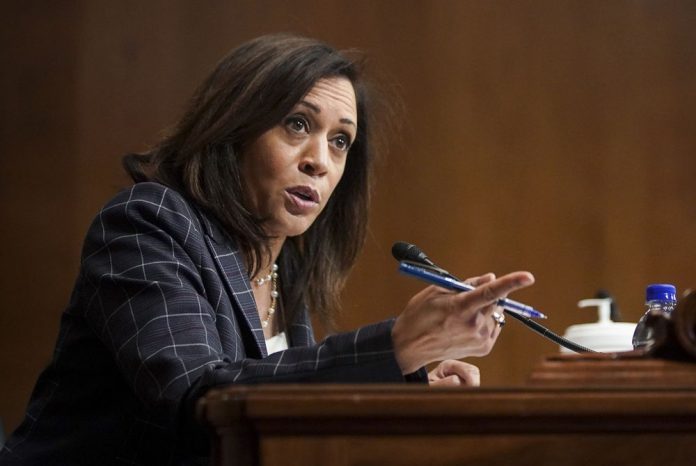 She touted that reputation at the last Democratic National Convention, telling a New York delegation breakfast: “I now stand before you as the top cop of the biggest state in the country.”

In 2020, Harris could be attending the next Democratic convention as its vice presidential nominee — and as one of its top cop reformers.

The California senator’s current role makes many law enforcement officials, as well as some Black activists, question whether she’s evolved with the times or is taking advantage of a political opportunity.

“She’s definitely changed her positions and her thought processes about how the country’s being policed,” said Rudy Perez, vice president of the California Coalition of Law Enforcement Associations, which represents 130,000 people.

In the Black community, there’s also some wariness about where Harris’ true political soul lies.

“Kamala’s relationship with law enforcement is, as they say, complicated,” said Steve Phillips, host of “Democracy in Color with Steve Phillips,” a “color-conscious” podcast on politics.

“For better or worse, for her entire career she very much built her brand and defined herself as a law enforcement officer,” said Phillips, who has been urging presumptive Democratic presidential nominee Joe Biden to pick former Georgia House Minority Leader Stacey Abrams as his running mate.

Harris does win praise for her views over the years from some law enforcement watchdogs.

“Sen. Harris takes a realistic approach to what problems she can solve from the position she is in. That will look to some as if she has changed positions.

“I think it is more accurate to say she has adjusted tactics as she listens to those who disagree with her and her ability to effect change evolves,” said Phillip Atiba Goff, co-founder and CEO of the New York City-based Center for Policy Equity, which aims to identify and reduce racial disparities in law enforcement.

Biden is expected to announce his vice presidential choice around Aug. 1, and has said he will pick a woman. He is under pressure from many Democrats to pick a woman of color.

Harris, the daughter of Indian and Jamaican immigrants, is regarded as a front-runner, partly because she’s won three statewide races in the nation’s largest state.

Critics maintain her tone has changed over the years when discussing criminal justice reform.

In her 2010 book, “Smart on Crime,” she wrote, “If we take a show of hands of those who would like to see more police officers on the street, mine would shoot up. A more visible and strategic police presence is a deterrent to crime, and it has a positive impact on a community.”

She called police officers “a reassuring sign of a community’s commitment to order, calm and safety. More beat cops means more rapid response to assaults, traffic crimes and robberies has and has a profound effect on reducing quality-of-life crimes by simple presence.”

Harris wrote, “Nobody wants to live in a military zone with a police vehicle parked on every corner; but virtually every neighborhood wants police responding to threats or beat cops deterring crime on the street.”

Harris was asked last month on ABC’s “The View” for her thoughts on the Defund the Police movement.

The debate, the senator said, is about “reimagining how we do public safety in America … We have confused the idea that to achieve safety you put more cops on the street instead of understanding to achieve safe and healthy communities, you put more resources into the public education system of those communities, into affordable housing, into home ownership, into access to capital for small businesses, access to health care regardless of how much money people have. That’s how you achieve safe and healthy communities.”

Harris became San Francisco’s district attorney in 2004 and quickly infuriated many in law enforcement as well as some of the state’s most powerful politicians.

She was a vocal opponent of the death penalty, which the Legislature reinstated in California in 1977. But three months after Harris took office, a San Francisco police officer, Isaac Espinoza, was killed. Harris would not seek the death penalty against suspect David Hill, who was given two consecutive life sentences for the murder.

She explained her decision in an op-ed in the San Francisco Chronicle, writing, “I gave my word to the people of San Francisco that I oppose the death penalty, and I will honor that commitment despite the strong emotions evoked by this case.”

Police were outraged, and when Harris ran for attorney general in 2010, their ire helped lead to endorsements of her opponent.

“We were leery of her,” Brian Marvel, president of the Peace Officers Research Association of California, told The Sacramento Bee recently.

The law enforcement community, though, would warm to her.

In 2014, after a federal judge ruled California’s death penalty unconstitutional, she appealed the decision.

“It is not supported by the law, and it undermines important protections that our courts provide to defendants,” she said at the time. “This flawed ruling requires appellate review.”

She explained such decisions in an interview in the UCLA Blueprint in 2015: “I am personally opposed to the death penalty. I will follow the law, which is what I have done as attorney general.”

Police organizations came to appreciate her openness with them. “I was always able to call her,” said Marvel. “Having that opportunity is important.”

“She was considered a moderate to liberal prosecutor who wasn’t talking about structural change,” said Aimee Allison, Oakland-based founder and director of She The People, a national network for women of color.

After Harris came to the Senate in January 2017 she was ready for the national stage on criminal justice issues, having long proposed sweeping ideas for changing how law enforcement operates.

After the Black Lives Matter movement became prominent around that same time, she began a program of anti-bias training for law enforcement officers.

In Washington, with a national spotlight on her, she was in a position to effect big change.

She was a chief sponsor of an effort, ultimately unsuccessful, to create a National Criminal Justice Commission to study a revamping of the nation’s criminal system “from top to bottom.”

She pushed legislation to overhaul the nation’s bail system, telling the NAACP’s convention that summer that the plan was “a matter of economic justice because the person who can pay gets out.”

But the uneasiness about Harris’ intentions keeps surfacing, and her record still stings in some circles.

Some of the reformers’ ideas, said the law enforcement coalition’s Perez, suggest “people forget the thousands of lives we’ve saved.”

She was fine as attorney general, he said, “but the moment she went to the big house, she’s been placating social justice groups.”

At the Fraternal Order of Police national office in Washington, executive director Jim Pasco said “We haven’t had any significant contact with Senator Harris on public safety issues.”

She The People’s Allison, like others who have been wary, is watching.

“Every politician has to account for their political history,” said Allison, saying of Harris, “It’s more about how she shows up in the moment. I want to see her continue to condemn the cycle of police violence.”