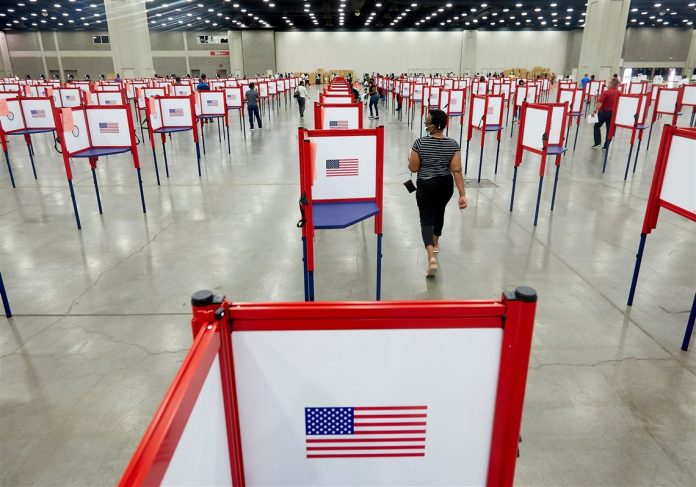 If U.S. voters wake up on the morning after Election Day 2020 and still don’t know who won the presidency, there’s a good chance they can blame problems in at least one of six states that are key to winning the White House.

Which problem? That’s harder to predict.

Election officials are worried that voter error, delayed ballots or long lines in any one of the states most closely contested — Arizona, Florida, Michigan, North Carolina, Pennsylvania and Wisconsin — could trip up the entire system.

And while maybe it’s just a single state — like Florida in 2000, with its hanging chads and 537-vote spread — it could also be a combination of problems in multiple states. Either way, it’s a good bet that the scenarios below would be behind any election-night cliffhanger:

The issue: Mail-in ballots are often rejected due to what might be called “voter error” — forgetting to sign, having a signature that doesn’t match the one on file or sending them back too late. This could especially be a problem where voters are not as familiar with the process because the state hasn’t had a lot of vote-by-mail in the past.

What states can do: Local and state elections officials, campaigns and nonpartisan groups can mount public service campaigns to teach voters how to properly fill out a mail-in ballot. Instructions for voting can be made extremely clear.

How states are handling it: Arizona and Florida are quite practiced at using and processing mail-in ballots, and Michigan had a successful run in 2018. But voters in North Carolina, Pennsylvania and Wisconsin are less familiar with the process.

The worst that could happen: Disenfranchisement. An Associated Press study of rejected primary ballots in Arizona, Colorado, Florida, Michigan, Pennsylvania, Ohio and Wisconsin found that up to three times as many mail-in voters could lose their vote as in 2016.

VOTERS DON’T HAVE A CHANCE TO FIX REJECTED BALLOTS

The issue: Some states give voters an opportunity to fix a ballot that has been rejected, but voting rights advocates say even then the processes are often inadequate either because of strict timelines or failure to promptly notify voters.

What can states do: State lawmakers can amend election laws to notify voters by phone, text, mail and email that their ballot was rejected. Some states allow voters to track their ballot status online. Deadlines to fix a ballot problem can be extended.

How the battleground states are handling it: North Carolina will let voters fix a problem up to nine days after the election. Arizona will let voters correct a signature within five business days, and Florida gives voters two days. Wisconsin allows voters to fix a ballot by the end of Election Day. So does Michigan, but its current law doesn’t require officials contact a voter when their ballot is rejected. Pennsylvania lawmakers are considering legislation to create a process for fixing errors.

The worst that could happen: More disenfranchisement. If states facing a backlog of mail-in ballots don’t process them quickly enough to notify voters that they were rejected in time, it will lead to higher than usual rates of disenfranchisement.

The issue: More than half of poll workers in 2016 were older than 60, and many have said the coronavirus will keep them from volunteering again this year. Also, polling places in nursing homes, senior centers and schools have been shut down to cut down on spread.

What states can do: Encouraging vote-by-mail and early voting will reduce demand on Election Day. Recruiting younger volunteers or calling in the National Guard to staff polling places could also help.

How the battleground states are handling it: Arizona requires counties have backup plans if lines exceed 30 minutes, Michigan’s primary went well, and North Carolina projects that as many as 80% of voters will vote early. But a recent report by the House Oversight Committee warned that Florida and Wisconsin both face potentially serious problems with low numbers of poll workers that could lead to long lines.

The worst that could happen: A coronavirus surge in a key state right around Election Day could upend plans for in-person voting. And if polling places are changed at the last minute, voters with less flexible jobs and child-care may end up disenfranchised.

POLL-WATCHING THAT CROSSES THE LINE

The issue: President Donald Trump has promoted baseless claims of fraud and vote-rigging for months, and recently told supporters in North Carolina that they should act as informal “poll watchers” at polling sites. But some fear such positioning could lead to voter intimidation or confrontations.

What states can do: State and local elections officials can make sure that laws and regulations about poll-watching are clear ahead of the election and ensure that they are evenly and properly enforced at all polling places.

How the battleground states are handling it: Arizona, Florida, Michigan, North Carolina, Pennsylvania and Wisconsin already have state laws strictly regulating who can serve as a poll watcher or election observer and how many are allowed at each polling place.

The worst that could happen: Overly aggressive poll-watching can lead to confrontations and even longer lines at polling places. Social media rumors and news reports of intimidating poll-watching can also dampen turnout.

The issue: Most states require mail-in ballots to be received by Election Day. But some observers fear that recent policy changes at the U.S. Postal Service could lead to ballots arriving later, even if voters sent them several days before.

What states can do: States can adopt so-called “postmark deadlines,” which allow ballots to be counted as long as they are postmarked by Election Day. This slows the vote count, however, and can lead to problems with ballots that weren’t properly postmarked.

How the battleground states are handling it: Arizona, Florida, Michigan, Pennsylvania and Wisconsin require ballots to be received by the end of Election Day. North Carolina will count ballots received up to three days after the election as long as they are postmarked by Election Day.

The worst that could happen: In 2016, about 1% of mail-in ballots were rejected, with nearly one in four of those being rejected because they arrived after the deadline. With vote-by-mail surging, that could mean hundreds of thousands of ballots will be thrown out.

IT TAKES DAYS OR EVEN WEEKS TO KNOW WHO WON

The issue: Some state laws bar election workers from processing ballots until Election Day. But with vote-by-mail rates spiking, that could lead to a backlog of mail-in ballots that takes days or even weeks to sort out.

What states can do: States can allow elections workers to compare signatures and prep ballots to be counted as soon as polls close, allowing for faster, more accurate results.

How the battleground states are handling it: The Sun Belt battlegrounds allow elections workers to get a head start (five weeks in North Carolina, more than three in Florida and two weeks in Arizona) but the Rust Belt states will have a backlog on election night. Pennsylvania is considering legislation that would allow earlier processing.

The worst that could happen: If the presidential race comes down to Wisconsin, Michigan and/or Pennsylvania, it could take days or even weeks to find out who won. That could give partisans time to sow doubt about the eventual outcome and cause instability.

Joy Mixes with Wariness as Black Americans Savor the Election of...