Home Career People On The Move Wharton’s Erika James, First Female Dean: ‘Gender is the Least of What... 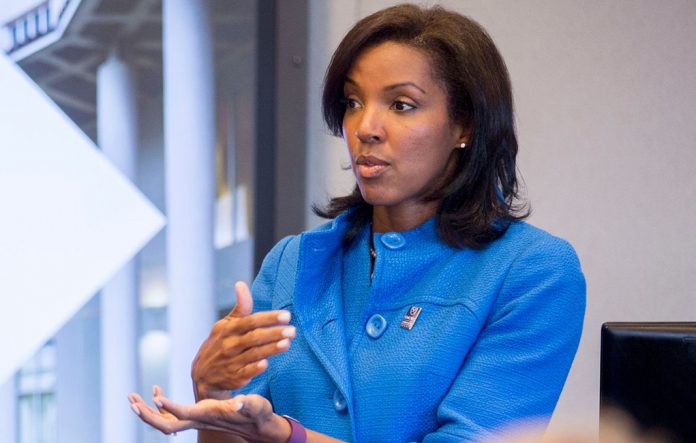 A rising star in the elite business academia world, Erika Hayes James last week was named the first woman, and the first person of color, to serve as dean of the Wharton School of the University of Pennsylvania.

She joins the ranks of top Philadelphia leaders, including new Police Commissioner Danielle Outlaw, who are both the first women and people of color in their positions.

“I’m excited, and I do recognize the historic nature of it, and I’m humbled by the opportunity,” James said. “Frankly, I believe my gender is the least of what I have to offer. Because I’m a woman, I bring a perspective on decision-making and how I engage in the community.”

James, 50, takes over as the dean of the undergraduate and graduate business school, which consistently ranks in the nation’s top three, along with Stanford and Harvard.

Being the first isn’t new for James. She was named the first female dean and first African American dean at Emory University’s Goizueta Business School in 2014. And she joins a small but growing list of female deans at prominent business schools, including California, Northwestern, and Indiana.

James is the second Wharton dean to be recruited from Emory, in Atlanta, which consistently ranks among the top 25 schools nationally, and has a job placement rate of 98%. Tom Robertson, Wharton’s dean from 2007 to 2014, also was recruited from Emory.

James helped bring in a $30 million gift last year from the Goizueta Foundation, which in December made the largest gift in the school’s history. The money is expected to fund three initiatives: a virtual classroom, a Goizueta Innovation Center, and the Roberto C. Goizueta Institute for Business and Society. Emory’s business school takes its name from the Cuba-born Goizueta, chair and CEO of the Coca-Cola Co. from 1981 until his death in 1997.

Accolades have trailed James for some time. She was profiled by Bloomberg News after being named dean of Emory’s business school in 2014.

“James is probably the only dean ever to have been the subject of a case study” about her life as “a successful professional,” said John Byrne, founder of Poets & Quants, which reports on the higher education industry.

Wharton is a much larger operation than Emory’s school, Bryne noted, and has more than 5,000 students across four degree programs, including more than 2,600 business undergraduates and nearly 1,800 full-time MBA students. The standing faculty includes 241 professors across 10 departments, with 243 non-standing full- and part-time faculty, he said.

Emory’s Goizueta Business School is ranked by Poets & Quants as the 22nd-best MBA program in the United States. Two-year full-time MBA enrollment is less than 350 students, while the two-year undergraduate program enrolls roughly 800, less than a third of the size of Wharton’s undergraduate population, Byrne estimated.

Despite declining applications to business schools nationally, James espouses the value of an MBA.

“I’m a staunch believer that the fundamentals of business — finance, accounting, operations, marketing, leadership, ethical decision-making — they undergird every sector in society,” she said. “Whether you’re in health care or education or a corporation, there’s no question about the value of business education.”

At Emory, James was instrumental in increasing the school’s faculty base by 25%. After James took the job, she asked to see the compensation and titles of all faculty, and found that finance faculty members were paid more than those teaching in other areas. James also sought out female doctoral candidates at other colleges and universities. Since she took over, 45% of Goizueta’s faculty hires have been women.

“I have to walk the walk as much as anyone else” about gender pay equity and workplace diversity, she told the Atlanta Journal-Constitution.

Born in Bermuda, raised in Texas

Born Erika Hayes, her parents, William and Gloria Hayes, moved from the U.S. to Bermuda so her father could teach music there. They moved back after she was born. Her mother, an educator and college administrator, and her father, a youth orchestra conductor and jazz bassist, ultimately divorced. Her mother moved to Sherman, Texas, and married Marshall Rosenberg, a clinical psychologist and founder of the Center for Nonviolent Communication.

She spent the summers with her father, who married again and is the cofounder, music director, and conductor of a youth orchestra in Michigan. During her childhood, her father was the only person of color for “500 miles around in the Upper Peninsula of Michigan,” James said.

She shuttled between black and white worlds, observing race relations in her own community. Her experience shaped her upbringing, and it’s “part of the reason I chose to study diversity in the workplace,” she told a KPMG conference in 2015.

Her stepfather, Rosenberg, influenced her decision to study psychology at Pomona College, and then pursue a doctorate in organizational psychology at the University of Michigan.

She would go on to marry Jimmie James, now a retired engineer who worked at ExxonMobil. They have two children, including a son who will attend her alma mater, Pomona, in the fall. Her husband and daughter will remain in Atlanta until her daughter’s high school graduation in two years.

James said her academic research “partly focused on diversity and inclusion in the workplace. So as a leader, I wanted to practice and lead in a way to create an environment that was diverse and inclusive.” Her papers included studies about diversity on corporate boards and business performance.

The 2008 case study, “intended to help management students explore the personal side of leadership and power,” said of James: “She had a husband who was a busy executive and lived two hours away during the week — and who was likely to get more promotions. She had two small children full of energy and enthusiasm. She had a full-time au pair and a personal Pilates trainer. She had always been known for her cheerful, can-do attitude.”

Favorite sports teams and music? “Since the music gene skipped a generation and landed squarely with my son, my favorite music is anything he has written, composed, or performed with his band, Venus and the Periwinkles. Their style is best described as indie rock. After that, definitely old school R&B. Earth, Wind & Fire is my favorite. People are also surprised to know I am a huge Carole King fan. I have my mother to thank for that.”

As for football, “my chief of staff doesn’t want me to answer that,” she said with a laugh. “But let’s just say I grew up in Dallas.”

She arrives at an established place. Wharton “is a top-ranked school with a very strong brand and network,” said Eliot Ingram, CEO of Clear Admit, a Philadelphia-based digital media firm covering the MBA admissions space. “It’s very well positioned to thrive in the changing MBA education landscape, as business schools compete with big tech and a strong economy” for applicants.

At Wharton, James wants to connect with the 100,000 or so alums making up the school’s extensive global professional network.

“In the first few months, I will spend time meeting and learning about my new colleagues,” James said, “and listening to students and alumni. My goal is to identify themes in what people say are their hopes and dreams for Wharton, and then get about the business of making them happen.”

James succeeds Geoff Garrett, who will become dean of the University of Southern California business school.

“She appears to be an impressive leader, scholar, and businesswoman,” said Wharton professor Olivia Mitchell, “so I am thrilled that she has accepted the position, and look forward to her arrival.”