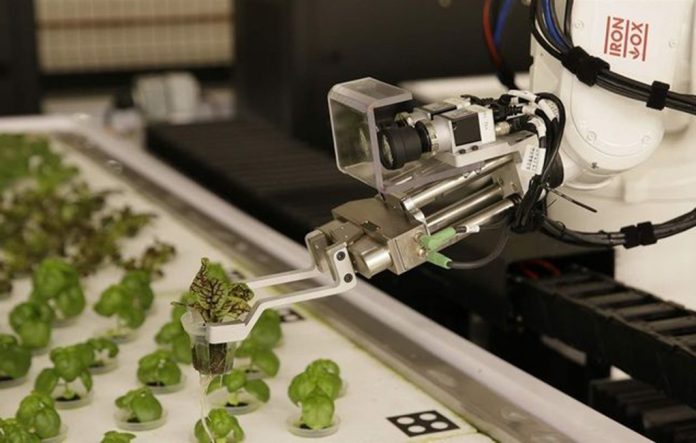 To the uninitiated, it can be hard to imagine.

Robots with fingers designed to pick mature tomatoes, among the most delicate of crops. A Fitbit-like collar that monitors the well-being of a cow. Drones with sensors to identify dry areas of a field or discover crop production inefficiencies.

“In 30 years, what we’re doing or seeing as innovative now will be viewed as tradition,” said Susan Duncan, associate director of the Virginia Agricultural Experiment Station at Virginia Tech University in Blacksburg.

Science and technology will be core to the farming revolution, which teachers and agricultural leaders envision as including robots, temperature and moisture sensors, aerial images and GPS technology, alongside big data that affects everyone — suppliers, farmers, traders, processors, retailers and consumers.

But agricultural educators and advocates are concerned about the future of agricultural education, given the industry’s broad needs and the lack of qualified job candidates. They say part of the problem is marketing: Most people, including students, equate agriculture with farming. The industry gets limited media exposure, they said, but also needs to do a better job of promoting itself, particularly as high-tech.

“We rely on software developers probably as much as Silicon Valley does,” said Eric Haggard, director of human resources, talent management and diversity and inclusion at AGCO Corporation, a Duluth, Georgia-based agricultural equipment manufacturer.

The issue is important to states seeking to protect their agricultural interests and grow their economies. For example, in Virginia, agriculture and forestry are among the largest industries, according to Virginia Tech, with an annual economic impact of more than $91 billion and nearly 442,000 jobs.

Precision agriculture — using technology to take detailed measurements and adjust on the fly — is intended to boost the efficiency and productivity of the farm and the health of the land.

According to an April 2019 report from the U.S. Department of Agriculture, digital technologies that collect and analyze large amounts of data, typically by agribusinesses, researchers and public sector officials, can help inform decisions on how to fertilize for soil conditions, apply pesticides to targeted areas, use limited water resources effectively, and estimate the potential profit and economic risk in growing one crop over another.

Precision agriculture could even help address global challenges, such as how to feed a population the United Nations projects will reach 9.6 billion by 2050.

But too few college graduates have the skills employers need.

The food and agricultural production sectors influence more than 20% of the U.S. economy and 15% of U.S. employment, or 43.3 million jobs, according to a report from Virginia Tech University and Tyson Foods. To be sure, digital technologies already have made an impact.

But if farms and producers had the digital technologies and expertise they needed, the United States could boost economic benefits by nearly 18% of total agriculture production, based on 2017 levels, according to the USDA report. That’s $47 billion to $65 billion annually in additional gross economic benefits.

The USDA report recommends colleges equip a new workforce for careers in high-value technology. Occupations focused on food, agriculture, renewable natural resources and the environment will need about 57,900 college graduates a year through 2020, but as of 2015, only about 35,400 available candidates graduated, according to a 2015 report from the USDA and Purdue University in West Lafayette, Indiana.

“People coming out of the communities really understand the farmer, and that colors the way they’re going to think about building the technology that suits the needs of the farmers,” said Sara Williams, head of recruiting at Farmers Business Network, a fast-growing agronomic information startup.

But agriculture can be a tough sell to students when other flashy majors are competing for attention. Engineering programs, for example, often have ample resources and funding. Computer science academies can give students computers, said Karl Binns Jr., lead development officer and former recruiter for the School of Agriculture and Natural Sciences at the University of Maryland-Eastern Shore, a historically black university.

“It’s very hard to tangibly hand somebody a piece of agriculture and say, ‘That’s why you should be in this industry,’” Binns said.

Binns and others said the agricultural industry can feel insular and difficult to break into for those who didn’t grow up on a farm, in a rural area or with an industry connection.

While there are efforts to expand the representation of farmers and agricultural professionals, the industry continues to be racially homogenous: Roughly 95% of agricultural producers are white, though the number of female producers grew by roughly 27% from 2012 to 2017, according to the 2017 agriculture census.

“Outside of the racial disparity, whenever you go to these agricultural conferences, it’s always people who are already on team ag,” Binns said. “If you’re only talking to people who agree with you, you’re not reaching a new audience.”

A House bill supported by the Maryland Farm Bureau that would encourage each county board of education to start an agricultural education program that includes integrated classroom and laboratory instruction failed for the second year to pass the state Senate, though in both years it passed unanimously in the House.

“We get a lot of bills in our committee, and we’re kind of saying that if it doesn’t take us forward, if it doesn’t do anything, if it’s just a feel-good, we shouldn’t make it law,” said Maryland state Sen. Ron Young, a Democrat from rural Frederick County who voted against the bill because it would not mandate the changes.

“I think some of the reasons the legislature fails is because they don’t see farming as being a viable occupation for students,” Shank said.

Young pushed back against that assertion too.

“We’ve allowed farmers to have all kinds of activities on their farms to produce money, like wineries and breweries and things like that,” Young said. “We’re constantly trying to do things. Agriculture is the state’s No. 1 job creator, so we do what we can.”

Finally, there’s long been a shortage of certified agricultural teachers. In addition to their teaching responsibilities, agricultural educators are expected to manage labs and community-based programs and serve as the faculty adviser for high school students’ agriculture organizations.

When schools are unable to fill positions with certified candidates, openings are filled with teachers from alternative backgrounds, but advocates say the field requires subject-specific knowledge.

Several states — including Hawaii, Maine, Rhode Island and Vermont — have no agricultural teacher preparation programs, according to a national teacher supply and demand study by the American Association for Agricultural Education.

“We know one of the best reasons anyone does anything is because someone says, ‘Hey, I think you have a lot of potential,’” said Ellen Thompson, the National Teach Ag Campaign project director for the National Association of Agricultural Educators.

Eventually robots will take over the fieldwork that’s typically the domain of migrant workers, and someone will need to control the machines, said Mary Lou de Leon Siantz, professor emeritus at the Betty Irene Moore School of Nursing at University of California-Davis and founding director of the Center for the Advancement of Multicultural Perspectives on Science.

She and others say the next generation of farm labor and agriculture workers will require more advanced skills. Today’s farm laborers will control the robots that will need round-the-clock maintenance. Meanwhile, through 4-H youth development programs delivered locally through University of California Cooperative Extension Offices, laborers’ children will be encouraged to pursue science, technology, engineering and math (STEM) paths in agriculture, de Leon Siantz said.

Building a pipeline that starts early, as in elementary school, is part of UC Davis’ ambitious plan to revolutionize agricultural technology. It’s looking at creating a major in digital agriculture and agriculture technology that would involve training in the use of autonomous vehicles, such as tractors, for agriculture.

The school also has invested in a course on the Internet of Things, during which students create devices that use the internet to turn equipment on and off, and smartphone interfaces and program controls to manage irrigation or environmental control systems for vertical farming, said David Slaughter, a professor of biological and agricultural engineering who’s managing the Smart Farm initiative.

Virginia Tech is in the midst of its own Smart Farm evolution to develop partnerships between researchers and industry.

Advocates in other states are reaching out to young people in urban areas to tap a different audience. In Nebraska, where 4-H programs reach about a third of young people between ages 5 and 18, there’s a push to reach those who may not have heard of 4-H before or live in underserved communities, said Kathleen Lodl, 4-H program administrator with the University of Nebraska-Lincoln Extension.

In Maryland, where agriculture is a critical industry, there are Future Farmers of America chapters in all but one county, and three in Baltimore City alone, said Shank, who’s also executive director for the Maryland FFA Association.

Binns, also president of Minorities in Agriculture, Natural Resources and Related Sciences, or MANRRS, has over the past six years helped rebuild chapters on the University of Maryland campuses of College Park and Eastern Shore, and at the University of Delaware, and launch the MANRRS Leadership Institute for underrepresented Maryland high school students, he said.

This past fall, Binns said, saw its highest number of students enter the agriculture college at the Eastern Shore campus.

Consider These Key Points Before Starting a Business

Tune Up Your Finances for a Better 2021

New Eyes at the FBI