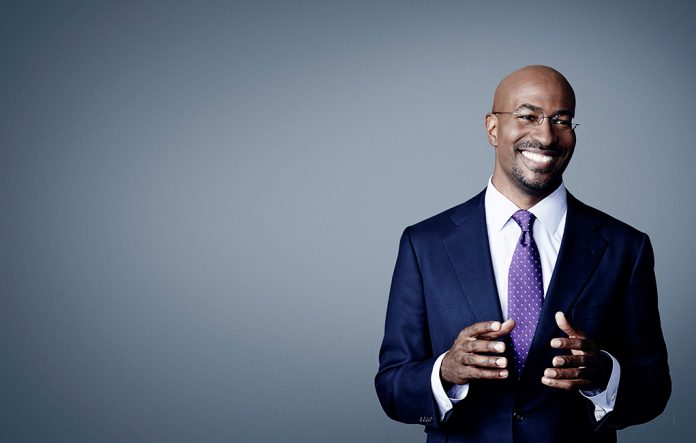 Van Jones (aka Anthony Kapel Jones) has played many roles since graduating from Yale Law School 25 years ago. His latest: host of the new CNN series “The Redemption Project With Van Jones.”

The show brings offenders face to face with the people most affected by their violent crimes over eight moving, powerful and unpredictable hour-long episodes. With the help of experienced restorative justice workers, Jones — long a proponent of criminal justice reform — facilitates the meetings, giving voice to both parties through interviews with the subjects, victim advocates, prison wardens and more.

He spoke with the L.A. Times about crime and punishment, call-out culture and competing against “Game of Thrones” for ratings.

Q: What is the first thing you want people to know about “The Redemption Project”?

A: It’s not a true crime show. True crime is a whodunit. We already know who did it. The questions we ask are: What is the truth long after the crime? Is the (perpetrator) sorry? Have the family members healed? What do they still need 10, 20 years later? I’m not interested in true crime. I’m interested in the “what happened after the crime,” and that’s a messier truth.

Q: Criminal justice reform is a hot topic, but it’s often argued on a policy level. Your show tackles it on a personal level inside prisons around the U.S.

A: Going in and out of prisons for work, I discovered that there are some real diamonds behind those walls. There are people who went in arrogant or remorseless but, despite prison conditions, have transformed themselves. I want those diamonds to get a chance to shine. On the other side of crime, the victims and survivors are often left dehumanized because they never got their questions answered. Somebody submitted a plea, lawyers jumped in, so 10 or 20 years later the (survivor) is still hurting. They never got a chance to ask the basic questions: Why did this happen? Are you truly sorry or are you just saying that because you’re trying to get a shorter sentence? What were my loved one’s last words? So many questions have gone unanswered that these people are trapped.

Q: Why televise these very intimate and painful meetings?

Q: You walk many paths. How would you describe what you do?

A: I consider myself to be a commentator and a talk show host and an advocate. Being an advocate might not be consistent with being a TV host, but I think about it like this: I have an opportunity to tell stories that I hope have an impact on people. Now whether I’m telling that story sitting in front of a committee and subcommittee in Congress or over a microphone at a rally or in a community center or on television or radio, it doesn’t matter. The key is, is the story true? If the story is not true, then I’m doing a bad job no matter what hat I’m wearing.

Q: You’ve argued social issues and politics as a CNN regular for a decade, but “The Redemption Project” is a different approach.

A: The idea of redemption is bigger than just a political idea. It’s not about the laws on the books. We now live in a call-out culture where it’s fashionable to have no empathy. We’ve made it trendy to be unforgiving, and that is very poisonous. I wanted to go 180 degrees against that culture and offer an example of people trying to listen to each other across the hardest gulf you’ll ever have. It’s a personal transgression gulf, and it doesn’t get much tougher than that. I have yet to find a person who’s been able to watch these episodes without dabbing their eyes at least once.

Q: I cried, at least twice, during each of the episodes I watched.

A: That means something in a world where you can hear about a mass shooting and just change the channel and not even blink. Trying to get people to feel anything is a big part of the mission of this show because my fear is that we’re in a zombie culture that has actually flatlined. Brains are still active, but the heart is dead. So we’re trying to resuscitate that human heartbeat. We’re not taking an easy assignment. This is not nonviolent drug offenders. It’s people who have done really bad stuff. But we hope that by the end of the show you’re rooting for both parties to show up and express what’s needed to heal.

Q: It must have been nerve-racking to make this show — the emotion, the weight, the unpredictability.

A: It was stressful. You don’t know what’s going to happen. We spent hours and days with both sides beforehand, but the day of the meeting, you don’t know if the victims and survivors will even show up. You’re walking somebody into a prison to talk with someone who shot them or killed their kid or who ran over their child. Every word that is spoken in all these episodes is the honest expression of somebody trying to get out of hell. And nobody knows how they’re going to react.

Two of our shows do not get to a warm and fuzzy place at the end. But at least those victims and survivors get some answers that help them move closer toward healing. But in three of our episodes they reach such a breakthrough that the survivors actually help us successfully get the person out of prison. You literally have a full range of experiences.

Q: How do you tackle it in a way that is empathetic and meaningful but not exploitative?

A: I would say don’t try this at home. We partner with organizations that have been doing this quietly for decades. The restorative justice movement is a very small but highly principled movement. We were able to rely on the organization with this very tough assignment. We said we wanted to find the truly repentant accused, as best as we can tell, and find someone who has been a victim, who wants to have the conversation. They can never have spoken before and they need to be willing to do it on television.

Q: Each hour-long episode is very intense, but also very reflective. The stories unfold slowly out of respect to both sides and require some patience.

A: The editors and producers trust the silence to do some of the work that the words can’t do. If there’s anything brilliant about the show, it’s in the trust that the producers place in the audience to walk with these people a few steps.

Q: While serving in the Obama administration you were targeted by the right in a smear campaign and ended up stepping down. But you catch flak from all sides, recently from the left when you supported President Trump’s passing of the First Step Act for criminal justice reform. How do you push through all that?

A: I have to put things in context. They put dogs on my uncles’ ankles when they were marching for civil rights. They put fire hoses on people who look like me. They shot Dr. King in the face in front of his friends when he was only 39 years old. But none of his friends gave up the fight. And I’m supposed to collapse over a mean tweet?! That doesn’t make sense.

I don’t like it when I’m trending for two or three days on Twitter because the liberals are mad at me. I don’t like it when Fox News decides to make me the villain of the day. But at the end of the day I have to have perspective. I’ve never met anybody in prison who said, “Please get me out of here, but whatever you do, don’t work with any Republicans.” I can’t let this bullying culture stop me from standing up to the real bullying that’s going on inside the incarceration industry.

Q: You also host CNN’s “The Van Jones Show” with a mix of guests, from Jay-Z to Amy Klobuchar.

A: CNN had Larry King and he had pop culture stars all the time. I’m trying to just take a tiny little corner of that big canvas that he painted and build there. We’re at a place where people actually trust artists more than they trust the politicians. Artists will say things that the politicians would be scared to say. Then when I talk to politicians, I love to ask them about personal stories. I give them a chance to show a side of themselves they don’t often get to show.

Q: That airs every other Saturday while “The Redemption Project” airs Sundays. You’re essentially dominating the weekend at CNN.

A: It’s an unbelievable blessing. And Sunday was Anthony Bourdain’s time slot, which is sacred ground at CNN. I’m honored.

Q: But you’re also up against “Game of Thrones.”

A: (Sighs) I know, and there are no dragons in our show. But we’re only competing on the East Coast time slot. They can use their DVRs and watch it the next day. As long as I still get my ratings …

Snap: Making the Most of First Impressions, Body Language, and Charisma