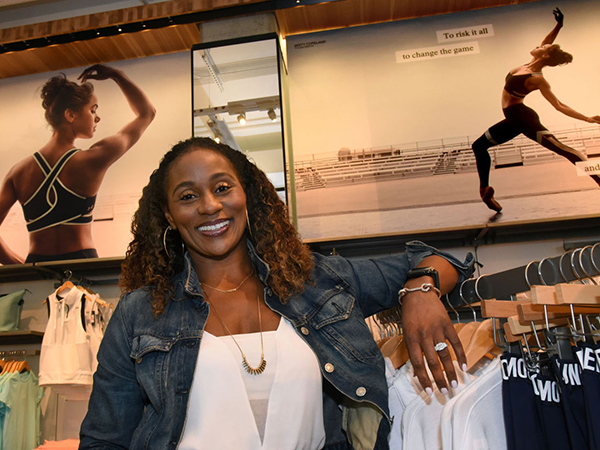 After a second consecutive quarter of losses, Under Armour is talking again about remaking itself from a predominantly men?s brand into a business with broad appeal across all categories of consumers. And CEO Kevin Plank has identified its women?s lines as particularly promising opportunities for growth.

But for a company that was born on the football field, introduced itself with commercials depicting a muscular sort of grit, and is still run as a kind of supersized team, the pivot Plank describes will be a challenge.

As the Baltimore-based brand seeks to gain on rivals Nike and Adidas in the global market, analysts say, Under Armour must move beyond its masculine image and ? like other performance apparel companies run largely by male executives ? ensure it isn?t perpetuating the kind of jock culture that excludes the half of the population that purchases most apparel.

?The sports industry is and always has been a male-dominated industry,? said Matt Powell, an industry analyst for The NPD Group. ?Consequently, the sports industry has struggled in growing the women?s business? ? and is leaving ?a significant amount of business on the table.?

Under Armour says 48 percent of its global workforce of more than 14,000 are women, and females account for about 25 percent of its vice presidents. The numbers of women thin out markedly near the top. Kerry Chandler, the chief human resources officer, is the lone female listed among the 11 executive officers on the company?s investor relations web page. Two of the company?s 10 directors are women.

?The industry is male-dominated,? said Adrienne Lofton, Under Armour?s senior vice president for global brand management. ?And that is a hangover from many, many years of sort of the old standard of what it looks like to live and work in sports.

?What we?re focused on is the company and what we can do to continue to drive numbers in a place that feels more balanced and reflects the consumers that we serve.?

It?s not just the sports industry in which men hold most of the highest positions. Women remain scarce in the executive ranks and on the boards of most companies. There are fewer than 30 female CEOs in the Fortune 500.

Analysts say more representation of women in leadership helps companies sell more products to women, who are responsible for the majority of spending on apparel ? for themselves, and for the boys and men in their lives.

Bridget Brennan is CEO of the consulting firm Female Factor and author of the 2011 book ?Why She Buys.?

?I think that any company striving to make a big impact should be striving both externally and internally,? she said. ?The more diverse, the better, especially when serving a diverse population.?

While Under Armour began in football, it has expanded far beyond the gridiron, making products for all major sports, and activities as diverse as running, hunting, working out and going to the mall. The company has invested hundreds of millions of dollars buying fitness and health-tracking apps.

Under Armour?s recent campaigns for women include a pitch featuring stylized videos ? set to poetry ? showcasing the toughness and athleticism of ballerina Misty Copeland and other female athletes.

?We have an incredibly talented team that is focused on her, what she needs and how we can outfit her 24/7,? said Chandler, the human resources executive.

Under Armour has long sought inroads in the women?s space. The company aired its first women?s commercial ? featuring Heather Mitts of the U.S. national soccer team ? in 2005, and signed champion skier Lindsey Vonn to an endorsement deal the following year.

Under Armour reached $1 billion in women?s sales in 2016 out of $4.8 billion total revenues. But while the company called the $1 billion figure a ?milestone,? the share has stayed mostly in the 20 to 30 percent range for years, even as the company has grown.

?We see an incredible amount of runway for this business,? Plank said during an April earnings call. ?But there is work to be done.?