(Reuters) – Trump turmoil may not be enough – it will take an aggressive Federal Reserve to bring an end to the low volatility, rising stocks party.

Given the Fed?s track record of managing for smooth and rising financial markets as if it were an actual mandate, this is another way of saying it will be a while.

Markets suddenly woke up, at last, to the risks of a shambolic and potentially impeachable president on Wednesday, with S&P 500 volatility registering its eighth-biggest rise and the stock index itself tumbling 1.8 percent.

This followed reports that former FBI Director James Comey, fired by Donald Trump, said he has contemporaneous notes of meetings during which the president may have tried to interfere with investigations of his former national security adviser.

Various ?Trump effects? on financial markets have previously ebbed and flowed. But this was the first time news about the administration genuinely alarmed markets, seemingly confirming widespread predictions that 2017 would be the year of ?political risk.?

That thesis is undermined by the way in which financial markets have since returned to calm, despite the onward march of a story suggesting the Trump administration will be at least under siege for an extended period and at most brought to a premature end.

Several things stand out: not only did markets resume a gentle march upward with falling volatility, but traders immediately reduced bets on a June and subsequent Fed rate hikes.

Volatility, as evinced in the VIX index of S&P 500 movement, spiked almost 5 points to 15.42 on Wednesday but has since settled back below 12, not far off its recent historically low levels.

“In the absence of an active and effective fiscal policy authority, global monetary policy authorities will fill the policy void. And what is their policy? Low growth. Financial asset inflation. Low volatility. Wash, rinse, repeat,? Hunt wrote in a note to clients.

“Until and unless (the ECB’s Mario) Draghi starts to taper and (the Fed’s Janet) Yellen looks to hang a recession around the Donald?s neck with beyond-tapering balance sheet reduction, I don?t see how political risk translates into market risk.?

BERNANKE DOESN?T GET IT?

Wednesday?s sell-off, in markets and in rate hike expectations, brought forth a variety of stories and analysts coming out and saying the Fed?s hand would not be stayed by Washington turmoil. It is significant that this happened after markets returned to calm, which again happened after odds were reduced of rate hikes.

Rates now stand at a range of 0.75-1.00 percent and the median expectation of Open Market Committee members is that they end the year at 1.375 percent.

To be sure, the Fed has good reason to want to bring rates back to a more normal range, and to soon begin running down the size of its $4.5 billion balance sheet of assets acquired as part of quantitative easing. Not only does the Fed have some concerns about inflation ultimately picking up due to near-full employment, but putting some ammo back in the magazine would be useful in the event of a downturn.

That the markets believe monetary authorities have their back and will insure them against the worst of their losses is clear. Yet even Ben Bernanke, who as Fed chair spent eight years cleaning up after one risk-taking mess or another, seems stumped by investors? lack of an adrenal function when it comes to political risk.

“It puzzles me that markets are very blas? about political risk until the last minute,” Bernanke said while markets were selling off on Wednesday. He was speaking at SALT, a financial industry conference in Las Vegas affiliated with Skybridge Capital.

To be fair, Bernanke said the biggest political risk is escalating tension between the United States and North Korea, which isn?t obviously made more dangerous by Trump?s woes.

Yet a look at asymmetrically risk-friendly central bank policy over the past two decades makes his words ring rather hollow.

That Bernanke was speaking, very likely for a fee, at a conference presided over by Trump associate and one-time administration appointment candidate Anthony Scaramucci adds another irony. Scaramucci sold his stake in SkyBridge to a consortium including Chinese investors in January.

Politics may well undermine markets in the next year, but investors are right to wait for central banks to pile on pressure before joining in the alarm.

(At the time of publication James Saft did not own any direct investments in securities mentioned in this article. He may be an owner indirectly as an investor in a fund. You can email him at jamessaft@jamessaft.com and find more columns at http://blogs.reuters.com/james-saft) 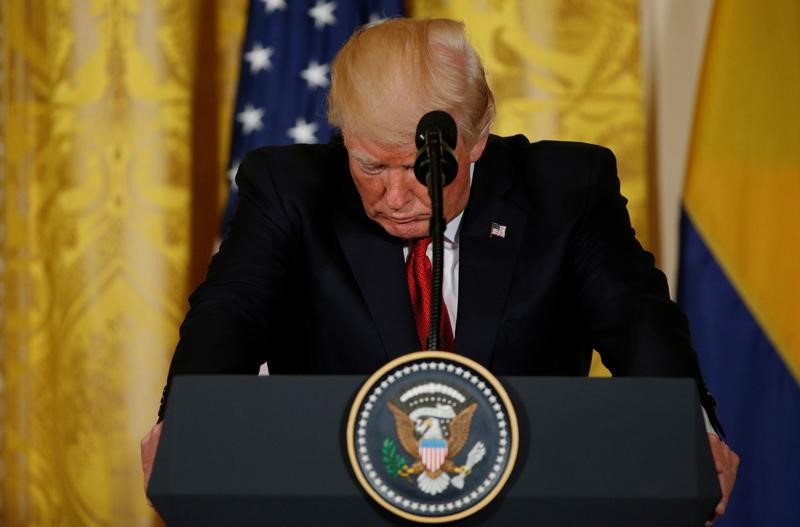