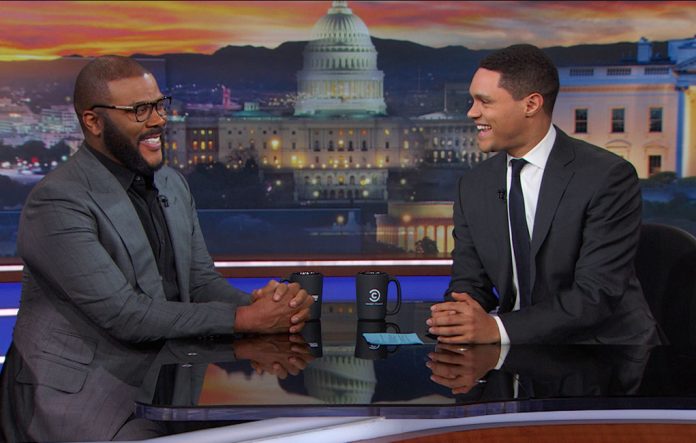 Viacom Inc. is locked in a high-stakes showdown with AT&T as the telecommunications giant weighs whether to drop Viacom’s cable networks — including MTV, Comedy Central, VH1, BET and Nickelodeon — to save $1 billion a year in programming costs.

The two companies have been negotiating this week to try to hammer out a new carriage contract with a 9 p.m. PDT Friday deadline looming. Without a new agreement in place, or a short-term extension, AT&T would be forced to remove Viacom’s channels from its DirecTV, U-Verse and WatchTV services.

Programs like “The Daily Show with Trevor Noah” and “South Park” on Comedy Central; “SpongeBob SquarePants” and “Paw Patrol” on Nickelodeon; and “Love & Hip Hop Hollywood” on VH1 would disappear for AT&T’s customers.

Viacom has enlisted several of its top stars, including Trevor Noah, Tyler Perry and Lindsay Lohan, to rally fans to pressure AT&T to keep the channels.

“If you think government shutdowns are bad, get ready for something worse. AT&T-DirecTV might drop Comedy Central and up to 22 other Viacom channels,” Noah posted on Twitter. “If that happens, you won’t be able to watch The Daily Show with me! Call 888-250-5557 and tell AT&T-DIRECTV to keep Comedy Central.”

Perry weighed in on Facebook: “This is crazy. I’ve had DIRECTV for years. You can’t just drop BET!!! And not expect there to be backlash.”

The dispute comes as both companies struggle to adapt to industry shifts. Streaming services such as Hulu and Netflix have provided consumers with lower-cost alternatives to high-quality television.

Viacom has suggested that it is prepared to lower its fees to strike a deal with AT&T.

“We’ve made a series of offers that are both good for consumers and good for AT&T – giving subscribers more access to the Viacom channels they love, while enabling AT&T to lower subscribers’ bills and provide customers with a variety of packages and price points,” Viacom Chief Executive Bob Bakish said in a note to staff members this week. “Despite these efforts, AT&T continues to insist on unreasonable and extreme terms that are totally inconsistent with the market.”

Aside from disagreements over fees, Viacom and AT&T are also tussling over how widely Viacom channels will be available on streaming platforms that compete with DirecTV.

Viacom’s channels aren’t as popular as they were a few years ago — its ratings are down 40 percent since 2011, according to analysts. And DirecTV has been walloped by customer defections, a problem that has weighed on AT&T’s stock price for much of the last year.

“DirecTV pays Viacom about $1 billion a year. That’s a lot of cash AT&T could use” for paying off debt, Bernstein & Co. media analyst Todd Juenger wrote Thursday in a research report. “How many other low-risk opportunities does AT&T have to save $1 billion in cash?”

Other analysts said dropping Viacom could be catastrophic for DirecTV, which carries 17 Viacom channels.

“We think AT&T is being a bit irrational,” Marci Ryvicker, media analyst with Wolfe Research Securities, wrote in a report. She noted Viacom channels account for nearly 20 percent of viewership on the DirecTV service.

The ongoing negotiations at the DirecTV campus in El Segundo suggest that AT&T isn’t prepared to permanently drop the channels. If there is a blackout, it may be brief, analysts speculated.

Viacom’s weakness in such contract negotiations is one reason why its controlling shareholder, Shari Redstone, wants to combine the company with CBS Corp. Pay-TV operators would be unlikely to drop the channels if they were packaged with the CBS network — one of the most popular in television. However, it is up to the boards of Viacom and CBS to decide whether they want to restart merger talks.

CBS also may come to blows with the phone company this year; the broadcast network’s distribution contract with AT&T expires at the end of June.

US Exports Grow But Are Well Behind Obama Administration?s Goal