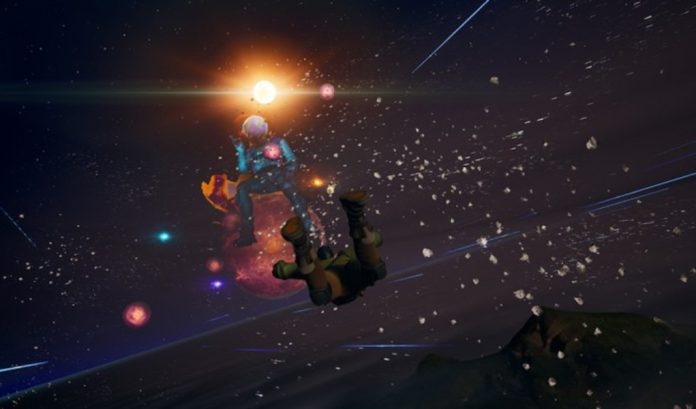 In an alternate version of 2020, hip-hop artist Travis Scott would have finished his second performance atop the bill at the Coachella Valley Music and Arts Festival this past weekend. Yet in a sign of our stay-at-home times, the Houston artist instead essentially just headlined “Fortnite,” the competitive video game-turned-brand platform that is as much a social network as it is a way to get shot with virtual bullets by strangers.

The battle royal game has never been this psychedelic. Moments before the event began Thursday at 7 p.m. EDT our digital guns disappeared. Instead, players could suddenly wield a flaming microphone stand and hoist it above our heads as we danced.

Welcome to the coronavirus era of live music events.

Scott’s invasion of “Fortnite” was essentially an interactive music video, one the artist used to premiere “The Scotts,” a new song with Kid Cudi. While Scott’s concerts can be over-the-top spectacles involving amusement park rides, in “Fortnite,” the artist and Epic Games focused on the trippier side of his work. Throughout the roughly 10-minute experience, players were constantly disorientated, teleported around the “Fortnite” map while an extremely buff holographic version of Scott (at least until he took on more of a cyborg form) stomped throughout an interactive universe.

While some of “Fortnite’s” other high-profile pop culture events — the premiere of a clip from “Star Wars: The Rise of Skywalker” or concert from electronic artist Marshmello — felt relatively loose and free-form, Scott and the North Carolina-based Epic Games concocted a communal event that had ambitions to transcend its promotional nature.

While quickly touching on hits such as “Sicko Mode” and “Goosebumps,” players were constantly thrown around the world. Every few seconds the screen would flash as we were tossed from “Fortnite’s” beachside towns to outer space, and at one point we were completely submerged under water, attempting to float toward an astronaut.

While players swirled around and away from Scott, the event, dubbed “Astronomical,” constantly aimed to toy with our perceptions. If there’s a party-amid-the-flames aspect to Scott’s increasingly languid soundscapes, “Astronomical” was hedonism at its most disorienting, largely giving a makeover to “Fortnite’s” exaggerated and simplistic design.

When shot to an area filled with palm trees, with Scott the Giant and a neon light shower towering above us, “Astronomical” had something of an ’80s-inspired, “Miami Vice” aesthetic. But that was short-lived; soon star fields glistened and the ground below our avatars morphed into neon-green dance floors.

While much of the iconography was pulled from art stemming from Scott’s 2018 album “Astroworld,” including the cover that turns Scott’s head into a golden entryway into an amusement park, there were surprises, such as the mechanical planet-like structure filled with carnival rides that gradually fell apart as we flew closer. It came to an end as we flew through a space into a flashing butterfly light, a callback to an earlier “Fortnite” event.

The event built to the premiere of the new song — “Fortnite” centered on moments from “The Scotts” that appeared to feature slower, melancholic synths — and then ended abruptly. A flash of light, and suddenly we were no longer in what seemed to be the video game of Scott’s dreams and back to “Fortnite,” where the digital bullets could then inflict harm on our virtual characters.

If there’s a shortcoming to “Fortnite” becoming a rival to, say, Facebook or YouTube, it’s that it comes with its own language, requiring users to essentially puppeteer avatars around the world to experience content.

But while “Fortnite” can be intimidating to the uninitiated — this world isn’t as friendly as that of, say, “Animal Crossing: New Horizons” — it is versatile. It can house the Avengers, and also construct its own pop-up amusement park outside of arenas. As it evolves, at times “Fortnite” feels less like a game and more an experiment to test the waters on where interactive entertainment can go.

And it’s one with power. “Fortnite’s” Marshmello concert reportedly attracted more than 10 million people, so artists and brands will no doubt continue to turn to games to explore the potential benefits of their outlandish virtual stages. Lest there was any confusion as to why Scott was appearing in “Fortnite,” moments later his record label, Cactus Jack/Epic/Wicked Awesome, sent a press release detailing that the new single, as well as “Fortnite”-branded Scott action figure and NERF gun, would be available starting Thursday evening.

“Astronomical” will repeat three more times through Saturday, with staggered times aimed at various time zones around the globe. Arrive about 30 minutes early to get a lay of the game’s map and to navigate to the show. You’ll want time to play with that flaming microphone stand.

Captain Comics: A Primer on Who ‘Black Lightning’ is and isn’t