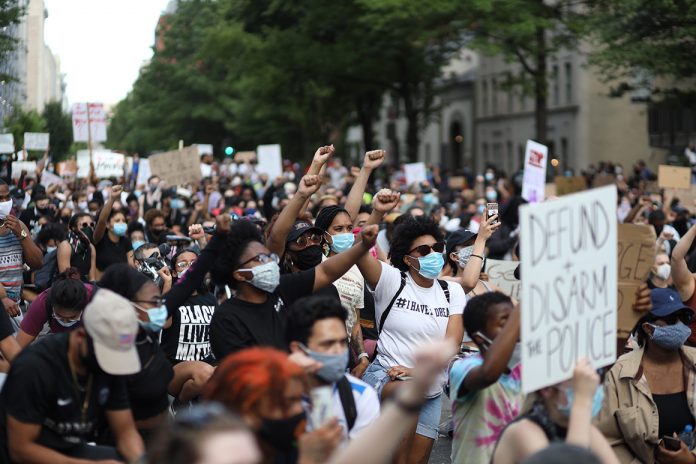 Monday evening, thousands of peaceful protesters began walking their cause down St. Paul’s Summit Avenue, moving from the Minnesota governor’s mansion and heading to the State Capitol. The crowd demanded that all four officers involved in the killing of George Floyd be jailed and prosecuted.

While at the mansion, around 30 St. Paul police officers on the outskirts of the crowd took a knee, which drew criticism from organizers who asked them to leave. As they started chanting, “What’s his name? George Floyd!” black Officer Antwan Denson shed tears.

But speakers said it was too little too late for police to take a knee, and they didn’t allow Gov. Tim Walz an opportunity to speak despite him standing among the crowd outside his mansion where he retreated to after a short while, drawing even more criticism.

The crowd chanted: “Say his name! George Floyd!” And “What do we want? Justice!”

Lawyer and activist Nekima Levy-Armstrong said officers ignored the tears of Floyd and they need strategic reform with public input. She said Walz needed to be patient and listen while demanding Floyd’s case be handled outside the state, citing distrust with Attorney General Keith Ellison.

“I’ve been shouting for five days in the street for justice,” she said. “I don’t want nobody in this state to take (Floyd’s) case,” adding she doesn’t believe the autopsy stating underlying health conditions being cause of death, rather a knee to the neck.

“People loved him,” she said. “Twenty (expletive) dollars is not a death sentence.”

Loretta VanPelt, with Twin Cities Coalition for Justice for Jamar, said she is tired of still protesting for the same change five years after Jamar Clark was killed by Minneapolis police, who were not charged.

“We feel like we’ve done this over and over again and we’ve had enough of it, really, but you know, the fight has to continue because we’re not seeing that justice,” she said. “It’s time now that they start listening. They have to start listening to us now. I mean, your city’s burned into the ground. They have to listen to us.”

In Minneapolis, hundreds of floral bouquets, too many to count, were placed beneath the George Floyd mural at Cup Foods. The crowd gathered at a respectful distance, between 10 and 30 feet away. Occasionally a person would move in and kneel with bowed head close to the shrine.

Larry Thomas hopped a plane in Sacramento, Calif, on Saturday night to be part of the activity in Minneapolis.

Thomas, a black man who works in private security, said he feels sorry for law enforcement as well as for the public. He said the violent protests have sometimes taken away “the meaning of why people are showing up. It’s causing rifts.”

“This is how it should be,” he said, gesturing to the peaceful but passionate crowd at Cup Foods, where people were applauding and chanting while listening to speakers.

Rose McGee, founder of Sweet Potato Comfort Pies, arrived with about 20 pies, each baked by a different volunteer. McGee, of Golden Valley, started her outreach by bringing pies to Ferguson, Mo., in the aftermath of the 2014 shooting of Michael Brown by a white police officer.

“Right now, black people are in a lot of pain,” McGee said. “I consider the sweet potato pie the sacred dessert of black people. It was there all throughout the civil rights movement.

“But sometimes people won’t take a pie, because they believe can’t nobody make a pie like their mama.”

Protesters have been marching the past several days to draw additional attention to Floyd’s death and to pressure authorities to punish the police who participated in the incident.

Chauvin is charged with third-degree murder and second-degree manslaughter after he kept his knee pressed against Floyd for nearly eight minutes, even as Floyd pleaded that he could not breathe.

Protesters have been demanding that the other three police officers at the scene that night also be charged with a crime. Officials said they expect charges to come. All four officers were fired by Chief Madaria Arondondo that day.

Under a late afternoon sun, the crowd kept swelling Monday. From Aztec dancers to bicyclists, nearly 1,000 people began to fill the space outside the governor’s mansion, bowing their heads and kneeling to honor Floyd and protest his death.

Cynthia Elmore was passing out free T-shirts on behalf of WeCantBreathe.org. They’ve given away 600 so far, in return for contact information from recipients.

A West Woodlawn Native Wants to Right Redlining Wrongs with Some...