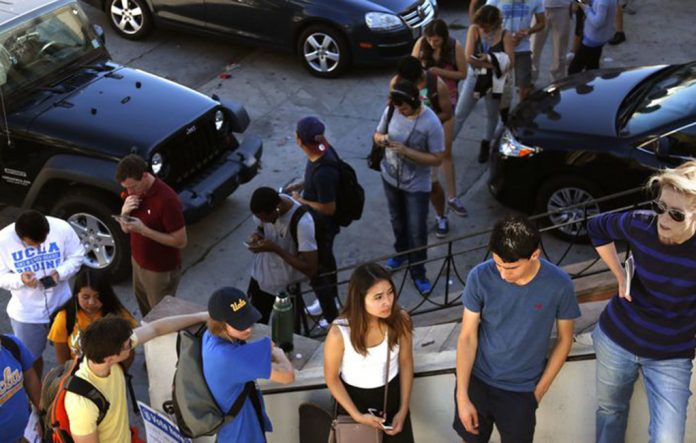 With their playbook for pushing government boundaries as a guide, some Silicon Valley investors are nudging election officials toward an innovation that prominent coders and cryptographers warn is downright dangerous for democracy.

Voting by phone could be coming soon to an election near you.

As seasoned disruptors of the status quo, tech pioneers have proven persuasive in selling the idea, even as the National Academies of Science, Engineering and Medicine specifically warn against any such experiment.

The fight over mobile voting pits technologists who warn about the risks of entrusting voting to apps and cellphones against others who see internet voting as the only hope for getting most Americans to consistently participate on Election Day.

“There are so many things that could go wrong,” said Marian Schneider, president of Verified Voting, a coalition of computer scientists and government transparency advocates pushing for more-secure elections. “It is an odd time for this to be gaining momentum.”

Behind the vote-by-phone push is a political operative who grew rich helping Uber elbow its way onto city streets and Bird populate the sidewalks with electric scooters, and who sees mobile voting as a potential cure for an ailing democracy.

Bradley Tusk is using the same tactics in this personal crusade that he used to advance tech startups. He has bet a significant share of the fortune he built off his equity stake in Uber that the gospel of mobile voting will spread so fast that most Americans will have the option of casting their ballots for president by phone as soon as 2028.

He has already persuaded the state of West Virginia and the City of Denver to start tinkering with voting by phone, and hopes to move quickly from there.

“What we learned at Uber is once the genie is out of the bottle, it can’t be put it back in,” said Tusk, a venture capitalist who managed former New York Mayor Michael R. Bloomberg’s reelection campaign before bouncing to Silicon Valley. In the tech world, he invests in startups that face political and regulatory hurdles, then helps knock those hurdles down by galvanizing the public’s appetite for game-changing innovations.

Tusk is certain participation in elections would surge if the technology were widely permitted, even though studies in some of the few places around the world that have tried the method revealed no big turnout boost. Although turnout for the 2018 midterm election was the highest in more than a century, it still brought out only about half of eligible Americans. And while turnout has gone up for presidential contests, it has dropped sharply for many state and local elections around the country.

The entrepreneur frames the fight as one pitting reformers against special interests invested in a low turnout that makes lawmakers unaccountable and easy to corrupt. He talks of the security concerns as if they are a sideshow. Sure, the scholars raising them are earnest, he said, but their approach to the challenge bewilders him. He likens them to people whose only solution to making a swimming pool safer is to fill it with concrete.

He and the executives at Boston-based Voatz, the company he is working with, say the way to make the technology more secure is to improve it through more pilot programs.

“Magic beans,” responds Josh Benaloh, a senior cryptographer at Microsoft, accusing backers who make claims for secure voting technology of peddling something that doesn’t exist. Benaloh sits on the National Academies committee that has warned against the technology.

This is a personal crusade for Tusk. He has refrained, he said, from investing in any of the start-up firms he recruits. His motivation comes from the dismay he developed over what he saw in politics, most notably when he was deputy governor in Illinois under Rod R. Blagojevich, who is serving 14 years in federal prison for corruption. Tusk detailed his disgust in a book he wrote in 2018 titled “The Fixer: My Adventures Saving Startups from Death by Politics.”

“I don’t see a world where the country can survive long term without something that fixes the dysfunction,” Tusk said. “Maybe this is that something.”

He’s meeting with election officials all over the country, offering to pay for pilot mobile voting programs out of his own pocket, as he did in West Virginia and Denver. Tusk is aiming to get 25 such pilots launched over the next few years, spending as much as $50 million. He is optimistic that a couple of states will work with him to allow voting by phone in the 2020 presidential primaries.

So far the pilot programs have been small. West Virginia used the Voatz app to offer mobile voting as an option to military personnel serving abroad in both the primary and general election in 2018. There were 144 votes cast in the state using it. Denver officials offered it as an option to several dozen voters in municipal elections in May. Tusk is confident that states that start dabbling in it will scale up quickly, and make the tech universally available in just a few election cycles.

“The technology can be perfected, but people have to look at this,” said Mike Queen, deputy chief of staff to West Virginia’s secretary of state. At a national gathering of secretaries of state this month in Santa Fe, West Virginia will be urging other states to launch their own pilot programs.

That prospect alarms some of the nation’s most prominent election-security thinkers, who see in Tusk a formidable adversary with an intimidating public relations tool kit. They say he and other promoters for the projects are misleading election officials about how secure the systems are.

“There is wide agreement among computer security experts that this is problematic,” said David Dill, a professor emeritus in computer science at Stanford. “It disturbs me that officials are getting enthusiastic about this voting technology without talking to the people who have the expertise to evaluate its security.”

The National Academies report warns that the risks of this and other forms of internet voting are “more significant than the benefits.”

“Secure Internet voting will likely not be feasible in the near future,” the report said.

The report specifically disputes claims by firms like Voatz that say their system is secure because it sends votes over a blockchain. The technology leverages a network of potentially thousands of independent computers with their own security systems, aiming to diffuse risk. Promoters of such voting say hackers could not alter an election without penetrating thousands of independent security systems.

That argument is in dispute.

“Anybody who is promoting blockchain voting either doesn’t understand blockchains, doesn’t understand voting, or is being dishonest,” said Benaloh, the Microsoft cryptographer. He was speaking at a panel earlier last month at Columbia University that also included West Virginia Secretary of State Mac Warner.

Cryptographers tick off a list of reasons blockchain technology used for such things as trading Bitcoin won’t work for protecting American election systems, which foreign agents already see as ripe for attack. The cryptographers warn that the app could be breached and stealthily redesigned to rig votes, that malware spread onto voters’ phones could make the system go haywire, that blockchains themselves introduce new security vulnerabilities.

Spreading voting out over the internet, computer experts at America’s most prominent research universities caution, also makes it impossible to create a reliable backup paper trail that election officials can use to audit results.

Blockchains “don’t solve any of the problems,” Benaloh said. “They actually introduce new ones, and make things worse.”

Voatz is refusing to open up its code to unaffiliated programmers and cryptographers like Benaloh and Dill for stress testing of vulnerabilities, citing trade secrets. But its chief executive, Nimit Sawhney, bristles at their critiques, saying they reflect “a misunderstanding of how we use the blockchain.”

The stakes are high. The lead investor behind Voatz is the venture arm of Overstock.com, which states its mission is to “change the world by advancing blockchain technology.”

West Virginia officials say they are taking it slowly. They have no plans right now to expand beyond overseas military personnel, saying those are voters who could otherwise be disenfranchised, and that the state’s audit showed the Voatz technology was effective in enabling them to vote securely.

But Tusk believes the technology will spread quickly.

“Once we prove this is a thing that works and people can do it, I think there will be real demand for it,” he said.