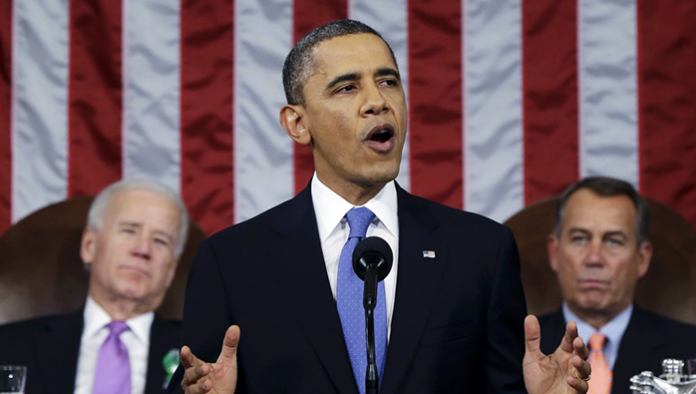 In 2008, visionary Barack Obama was a presidential hopeful igniting crowds from coast to coast with inspiring messages of hope and change. Last night in his second State of the Union address, President Barack Obama won applause from both sides of the political spectrum. “We do big things,” he said. “From the earliest days of our founding, America has been the story of ordinary people who dare to dream. That’s how we win the future.”

As Democrat and Republican members of Congress sat together in the House chamber in a setting that is usually anything but civil, the president delivered a message of optimism towards nation-building, global competition, education and innovation. He noted that China and India are already outperforming the United States on several fronts and vowed to get our nation up to speed. He also touched on tax cuts for wealthy Americans: “If we truly care about our deficit, we simply cannot afford a permanent extension of the tax cuts for the wealthiest 2 percent of Americans. Before we take money away from our schools, or scholarships away from our students, we should ask millionaires to give up their tax break,” he said. “It’s not a matter of punishing their success. It’s about promoting America’s success.”

In terms of jobs and the economy, Obama mentioned the success of small-business owners: ?We measure progress by the success of our people; by the jobs they can find and the quality of life those jobs offer; by the prospects of a small business owner who dreams of turning a good idea into a thriving enterprise; by the opportunities for a better life that we pass on to our children,? he said. White House Senior Advisor Valerie Jarrett ? interviewed last night on MSNBC?s Rachel Maddow show ? said that the business community has responded favorably to the president?s remarks. ?The business roundtable says that the president struck just the right chord,? she said.

Coming on the heels of his moving tribute to friends and family of the Tucson shooting victims, the president received several standing ovations last night in a speech that was reminiscent of some of his best campaign speeches. He spoke of democracy and its intrinsic ability to transform and heal. He reminded us that at the end of the day ? political parties aside, race aside ? Americans are one people. Though some can make the case that the president?s speech was short on specifics, others believe that his ideas were eloquently laid out with precision, ambition and determination. From ?Yes, We Can? to ?We Do Big Things?, it is our hope that President Obama will continue to ?reach across party aisles? in an effort to reduce the current $14 trillion deficit hole and fix the numerous unrelenting, decade-long problems that plague our nation.

Federal student loan payment pause is coming to an end

President Barack Obama’s Farewell Speech: “Be Guardians of Our Democracy”