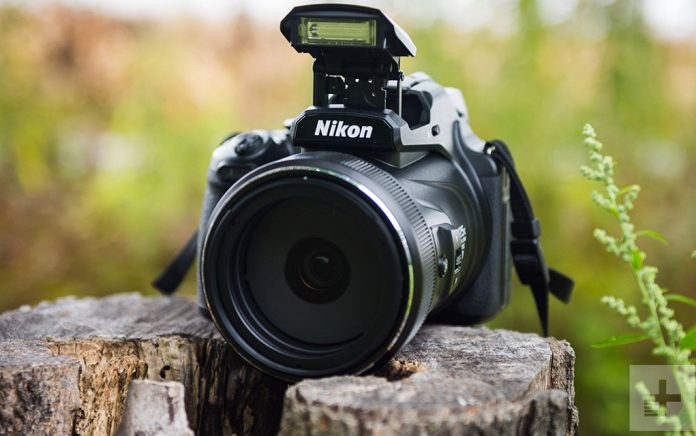 I wasn’t familiar with the term then, but I am now. A bridge camera is a bridge between a point-and-shoot camera and a DSLR, or digital single-lens reflex camera.

Back then, I thought the P900 was a pretty darn good camera with a lens that had an 83x optical zoom, or the equivalent of a 24 millimeter-2,000 mm lens on a 35mm camera.

My bottom-line thought on the P900 was that it was all the camera most of us would ever need.

I guess Nikon thought I was wrong, because I’ve been testing the new Nikon Coolpix P1000 ($999, www.nikonusa.com), and it’s bigger and better than the P900 in almost every way possible.

I’ll go ahead and say it: Nobody really needs a zoom lens that goes out to 3,000 mm, but it sure is fun to see what it can do.

I admire Nikon for creating such a beast of a camera.

The first thing I noticed is how heavy it is. As you extend the zoom lens, the camera’s weight shifts forward.

Holding the P1000 with the lens fully extended is difficult but not impossible, especially with the camera’s built-in image stabilization.

The camera weighs just over 3 pounds and measures 5.8 by 4.7 by 7.2 inches, which means you won’t wear it around your neck all day without some discomfort.

The lens has an aperture of f/2.8 at the widest to f/8 at maximum zoom.

The lens and imaging system has a digital zoom of 4x, so if you really want to experiment, the lens will reach out to the equivalent of a 12,000 lens for a 35mm camera. That’s telescope territory and not really a mode I would expect to produce very good images.

In macro mode, it can focus as close as 0.4 inches.

The viewfinder is not optical. It is a tiny 1 centimeter OLED screen. The main screen is a 3.2-inch TFT-LCD, but it is oddly not a touch screen, which I think is a shame for a $1,000 camera.

The camera’s battery is a weak point. The battery is good for up to 250 shots, or 1 hour and 20 minutes of video shooting. For a camera the size of the P1000, that’s underwhelming. If you buy the P1000, plan to buy a few extra batteries.

The camera can shoot RAW files, which capture more image data than JPG images, but every time you take a RAW photo, be prepared for up to a 5-second delay while the camera processes the shot. During this 5 seconds, the camera is unresponsive, which is a pain.

The built-in flash works out to about 41 feet.

The P1000 really wants to help you take good photos. There is a long list of scene modes that will change the exposure settings for certain situations.

The wheel on top of the camera includes program settings for shooting birds and the moon.

I took shots of both at the camera’s maximum zoom, and both modes resulted in really nice photos.

I took a stunning picture of the moon by steadying the camera against a post in my front yard. I found some pelicans at White Rock Lake gathered under the Garland Road bridge.

The P1000 shoots onto SD cards, but it also has wireless connectivity. If you load the Nikon SnapBridge app to your smartphone or tablet, the camera can upload its images to your smart device as you shoot the photos or videos.

Nikon was nice enough to send along two optional accessories for the Coolpix P1000, the Dot Sight and a remote control.

To enable the remote, you have to turn off the smart device connection, but from the remote you can zoom in and out and set the aperture, shutter and ISO as well as change modes.

The remote can trigger the shutter and start/stop videos. It’s great for when you have the camera on a tripod and you don’t want to disturb your image composition as you make adjustments.

The Dot Sight is an alternate optical viewfinder with an adjustable illuminated dot to help you keep track of far off subjects when you are zoomed to the max.

I took the P1000 on a trip around White Rock Lake to see how well it handled, especially at extreme zoom with and without a tripod.

The P1000 is a big camera, but I’m a big guy with big hands, and it was just fine to carry around and shoot. I carried it over my shoulder, but that’s what I had to do with heavy cameras and lenses back when I was a news photographer, so that didn’t bother me.

With the lens extended, keeping the camera steady gets interesting. I found myself looking for stationary objects to help steady my aim.

A monopod or tripod would be helpful. The 3,000 mm lens made things interesting when shooting all the way across the lake or reaching out to bring in birds at the spillway.

If I were a bird watcher or into sports or wildlife photography, this would be a great camera to buy.

On a vacation, it’s certainly all the camera you would need, but is the increase in size and weight a good trade-off for the long lens?

Interestingly, Nikon still sells the P900, which is smaller and lighter and has most of the lens range of the P1000. It obviously sees a market where both are viable.

If the thought of that huge zoom lens is making you giddy with possibilities, you’re a good candidate to buy one.

Kudos again to Nikon for giving us choices. The P1000 is sure a lot of fun to use.

Bottom line: P1000 has more lens than most of us need, but I had fun with it.

Verizon, The RAZR, and The Public

IPad Mini Both Delights and Disappoints