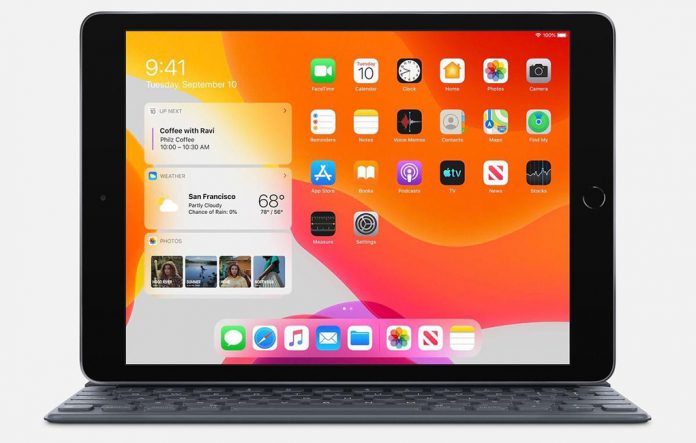 I review a lot of high-end gadgets, especially from Apple.

It’s not unusual to find Apple products that cost more than $1,000, but today I’m reviewing Apple’s cheapest full-size iPad, which starts at just $329.

This is the entry-level iPad. Some people call it the 2019 iPad, but Apple calls it the iPad 7th Generation, and it has a few new features that make it a very compelling choice if you’re in the market for a tablet.

In 2019, Apple expanded the iPad line to include four models: the iPad Mini, the iPad 7th Generation, the iPad Air and iPad Pro.

The iPad mini, the smallest iPad, received a much-needed update.

The iPad Air has a better screen and faster processor than the iPad 7th Generation, and the iPad Pro models have top-of-the-line specs and a larger screen with Face ID instead of a home button.

I’m happy that Apple seems committed to keeping prices low on the entry-level iPad, which is a big seller in the education market.

Much like the iPhone SE, a lower-priced iPhone for people who are good with a slightly older design and CPU from a few years back, the iPad 7th Generation runs on the A10 Fusion processor that was introduced in 2016. The newest iPad runs on the 2019 A12 Bionic CPU.

But if you think the iPad 7th Generation is just an iPad from three years ago, you’d be wrong.

Apple has done a good job of introducing new features to the low-end model. These features have been mainstays on the iPad Pro, and now they’ve made their way down to the cheapest model.

The first thing you’ll notice about the new iPad is that it has a slightly larger screen.

Every entry-level iPad since the first generation had a 9.7-inch screen. The latest iPad has a 10.2-inch screen. This isn’t better or worse (OK, I guess it’s better), but this also means that cases you used in the past will not fit this year’s iPad.

It also means the new iPadOS has a bit more room for running apps in split screen mode.

The iPad Pros used to be the only iPads with a smart connector, which uses three tiny surface contacts to transfer power and data for accessories — namely the Apple Smart Keyboard Folio.

The iPad 7th Generation has its own smart keyboard that connects via a smart connector. Simply attach it to the connector and it works. No batteries and no pairing required.

The new iPad works with the Apple Pencil, but so did last year’s model. So it isn’t exactly new, but it is very welcome for artists and note-takers.

Serious pencil users who make their living drawing will want to move up to the iPad Pro, which has a faster response time for a more realistic drawing experience.

We’ve already said that the iPad 7th Generation runs on the A10 Fusion CPU. It comes with either 32 gigabytes ($329) or 128 gigabytes ($429) of storage for your apps and files, and it’s available in silver, space gray or gold.

It has 4G LTE available in all configurations for an extra $130.

There’s still a home button with a Touch ID sensor, and it still has a headphone jack and a lightning connector for syncing/charging.

It supports the first-generation Apple Pencil.

The iPad can record 1080p HD video at 30 frames per second and slow-motion video at 720p at 120 fps. It’s not gong to win any awards, but it’s a pretty good camera for a tablet.

The FaceTime HD camera has a 1.2 megapixel sensor and 720p video recording.

The iPad 7th Generation has the latest versions of Wi-Fi and Bluetooth.

Its Touch ID sensor also brings the ability to use Apple Pay.

The 32.4-watt-hour battery should last 10 hours for Web surfing or watching videos or music.

For the first time in 2019, Apple has separated the operating systems for iPhones and iPads.

The iPads now run iPadOS, which is designed to maximize the large-screen experience and make it more like using a laptop.

It has a new home screen with widgets on the left side of the screen, app icons on the main part of the screen and a dock at the bottom. It feels like you’re more in control of things.

You also can get more app icons on the home screen if you like, and you can add folders to the dock.

Sidecar is a new feature that allows your iPad to be used as a secondary wireless display for your Macintosh computer (if the Mac is running macOS Catalina).

Slide Over is a new way to drag an app from the dock and have it appear in a floating window above whatever app your iPad is running. You also can have two versions of an app running on the same screen or two different apps running at the same time in a split screen.

There’s also picture-in-picture for videos, so you can have two apps on the screen plus a small floating video window playing.

There are new multi-finger gestures for editing text, like copy and paste with a three-finger pinch in or out.

The on-screen keyboard can be shrunk down and moved to one side for one-handed typing.

The Files app finally gives users a look at where their files are stored and the ability to create folders and move files around.

Users can also connect USB storage devices like flash drives or hard drives to move files on or off the iPad.

There is a lot more that I’ll cover in an iPadOS review later in the year.

For most users who just want to surf the internet, read email, watch online videos and organize and edit photos and videos, the iPad 7th Generation is all the iPad they’ll need.

I’d opt to pay the extra $100 to increase the storage to 128 gigabytes. Sure, 32 gb sounds like a lot, but photos and videos will take up more space than you think.

This would be the iPad I’d recommend for someone like my mom or dad — or even me.

Bottom line: For most of us, this is the perfect iPad.

Mini-Laptop or Tablet ? Which is Better for You?

Apple Doubles Down on Sapphire