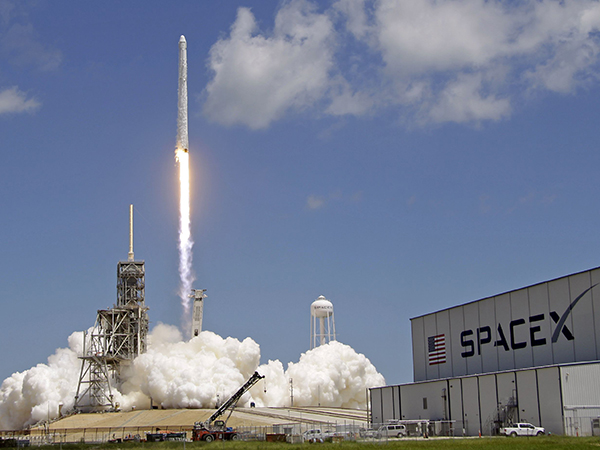 SpaceX successfully launched a satellite into space on a previously used rocket Wednesday, marking the third time it has achieved that feat.

The Falcon 9 rocket lifted into the air right on time and slowly elevated before heading into space with its payload: a satellite for Luxembourg-based SES Satellites.

About 9 minutes after the rocket delivered its payload, the Falcon 9 settled onto the company?s barge in the Atlantic Ocean.

?It?s a beautiful, cloud-free day,? Tom Praderio, SpaceX firmware engineer, said during a YouTube broadcast leading into the launch. ?There couldn?t be more-perfect weather for a launch.?

The rocket took off from Kennedy Space Center?s Launch Complex 39A, which hosted the final launch of Space Shuttle Atlantis in 2011.

The satellite sent into space is meant to improve high-definition and ultra-high-definition channel reception in North America. The feeds being bolstered have been used by thousands of radio stations.

SES Satellites has been one of SpaceX?s most-ardent backers, having been the first customer to hitch a ride on a previously launched rocket in March. At the time, Chief Technology Officer Martin Halliwell said the successful mission ?made a little bit of history and opened the door to a whole new era of spaceflight.?

SpaceX?s landing marked the 18th time it has recovered a used rocket, said Praderio, who provided commentary during the lead up to the launch on its YouTube channel.

This particular rocket had previously launched Feb. 19, when it delivered a load of cargo for the International Space Station.

?We are on the edge of quite a bit of history here,? Praderio said then. ?This is a hugely exciting part of the mission for SES, SpaceX and the industry, in general.?