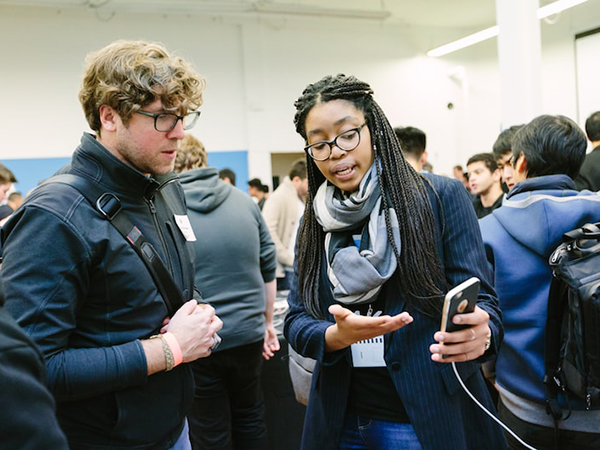 Make School, a for-profit startup in this city?s South of Market district, is one of the most unusual schools in the country: It lets students enroll in classes for free if they agree to pay later after they land a job.

?We can only make money if the students are doing well,? co-founder Ashu Desai, 24, said during an interview at the school, an airy space where students sit side-by-side at long rectangular tables pounding away at Mac laptops.

Desai, who attended the tony Menlo School in nearby Atherton, helped create Make School in 2012 after dropping out of UCLA after just one year.

The goal at Make School is not getting good grades. It?s putting together a portfolio of practical work capable of impressing Silicon Valley companies like Google and Facebook ? and prompting them to make lucrative job offers.

But the nontraditional approach to higher education is raising red flags for some experts. The model, they worry, creates an incentive for the school to admit only students it thinks can succeed ? which some education officials worry could disadvantage ?risky? students who come from low-income backgrounds.

Make School runs programs of varying lengths. Its ?Product College? is a two-year computer science program that combines internships at big-name Silicon Valley companies with classes that are light on lectures and heavy on projects. The goal is for graduating students ? most of them 18- to 24-years-old ? to have created games or other apps they can take to job interviews.

That, Desai argues, is often worth more in Silicon Valley these days than a traditional bachelor?s degree in computer science ? and some well-known investors are betting on the idea.

The school just picked up $2 million in financial backing from a San Diego-based asset management company. And Mitch Kapor of Kapor Capital and Reddit co-founder Alexis Ohanian also have invested in the school.

?Make School does something that many ed tech companies don?t,? Kapor said. ?They actually narrow gaps in access to computer science education. There are a lot of coding academies out there for people who can pay full freight up front.?

The company relies on something known as an ?income-share agreement,? which allows students to go to school at no cost initially ? meaning they don?t have to take out loans ? if they agree to pay the school a portion of their future earnings.

Students who opt for the income-share agreement pay 25 percent of their pre-tax salary to the school for three and a half years. The agreement kicks in only if students earn more than $60,000, which Desai says encourages everyone ? Make School, students and investors ? to do their best to help students land lucrative jobs.

?In the last five to 10 years,? Desai said, ?things have really shifted away from folks focusing on a degree to folks focusing on: What can you build? Can I see your code? These are the things that get our students in the door.?