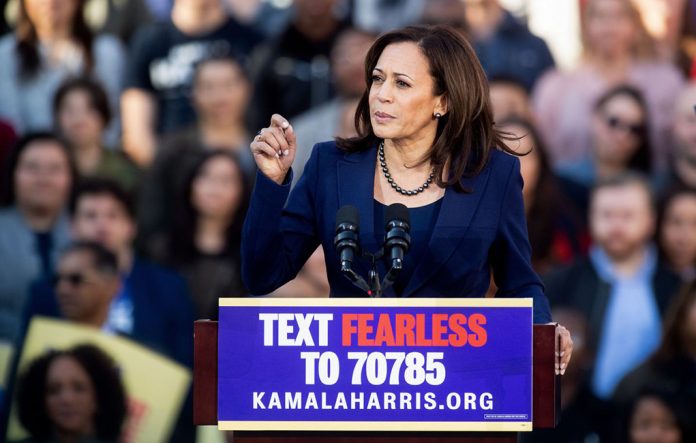 In an email to supporters, Harris blamed her campaign’s end on a lack of money.

“I’m not a billionaire. I can’t fund my own campaign. And as the campaign has gone on, it’s become harder and harder to raise the money we need to compete,” she wrote. “In good faith, I can’t tell you, my supporters and volunteers, that I have a path forward if I don’t believe I do. So, to you my supporters, it is with deep regret — but also with deep gratitude — that I am suspending my campaign today.”

Harris, a freshman senator from California, entered the race as a rising star, representing the more youthful and diverse voters that have become the base of the Democratic Party. Her high-profile interrogations of Trump administration officials in Senate hearings rocketed her to national acclaim, and her polished campaign launch established her in the top tier of a crowded Democratic field.

But Harris, 55, struggled to articulate a distinct reason for her candidacy, and the campaign attempted to regroup midway through the year for a last-ditch effort to win over Iowa, a state she had initially placed little emphasis on in her primary strategy.

Fellow Democratic contenders, including some of Harris’ most spirited sparring partners, reacted to the news with praise.

Former Vice President Joe Biden, whom Harris laced into in the first Democratic debate in June over his past position on school busing, lauded her as “a first-rate intellect, a first-rate candidate and a real competitor.”

“I have mixed emotions about it, because she is really a solid, solid person and loaded with talent,” he told reporters during a campaign stop in Iowa.

South Bend, Ind., Mayor Pete Buttigieg, whose success with big-dollar donors ate into Harris’ fundraising base, wrote on Twitter that Harris “has spent her career advocating for the voiceless and the vulnerable. I am grateful for her leadership and the courage she brings to the Senate and the national debate. I know she will continue to fight fearlessly on behalf of the American people — and our democracy.”

Born in Oakland and raised mainly in Berkeley, Harris is the daughter of immigrants: Shyamala Gopalan, who was a breast cancer researcher from India, and Donald Harris, a Jamaican economist who taught at Stanford University.

Her biracial background was initially seen as a major asset at a time when African Americans, Latinos and Asians are important blocs in the Democratic coalition. But Harris’ uneven performance in the campaign, especially her fumbling on health care, drove her poll ratings down and she never recovered.

An early supporter of “Medicare for All,” a touchstone for progressive candidates, Harris said in January that she wanted to eliminate private health insurance, but then quickly backed away from that position, leaving many voters unclear on where she stood. When she released her full health care agenda months later, her failure to explain it clearly on a debate stage raised still more doubts about her position on a top issue for many Democrats.

Harris has never lost an election. A career prosecutor, she was elected San Francisco district attorney in 2003, then state attorney general in 2010. She won her U.S. Senate seat six years later and quickly made a name for herself as a sharp interrogator of Trump administration appointees, including former Attorney General Jeff Sessions.

According to a new poll, a majority of California Democrats wanted Harris to drop out of the race. The poll, conducted by the Berkeley Institute of Governmental Studies for the Los Angeles Times, showed that by 61% to 24% likely Democratic primary voters in California thought Harris should quit the race.

Harris’ support in the state had steadily slipped, and she was the first choice of only 7% of the state’s Democratic primary voters, according to the poll, which was conducted Nov. 21-27. Judging by the second choices of her supporters, former Vice President Joe Biden and Sen. Elizabeth Warren would be the likely main beneficiaries of her withdrawal, at least in California, which holds its primary on March 3.

In recent months, her campaign was rocked by reports of internal dissent and dwindling funds. Still, the decision to drop out was abrupt. Just one day earlier, her campaign announced plans for California Gov. Gavin Newsom, a longtime political ally, to stump for her in Iowa later in December. And a pro-Harris super PAC planned to spend at least $1 million to run television commercials in Iowa trumpeting her as the Democrat most feared by President Donald Trump. The group canceled the ad buy Tuesday morning.

Nearly One-Third of Americans Dealing with Lower Income Due to Pandemic,...