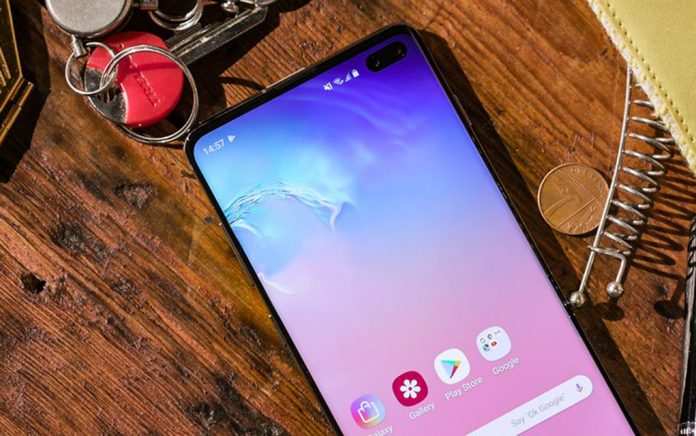 This week the sign was very clear — it’s time to review the Samsung Galaxy S10.

Usually when a new phone is released, I’ll get an email from someone at the phone’s manufacturer or a wireless company asking whether I’d like to review it.

Some phones are extremely popular (cough, cough Apple), and to get one of those, I have to reach out and ask to be put on a list and then wait.

Samsung phones are actually more popular, and luckily for me Samsung Mobile is based in Richardson, Texas.

After the announcement of the Samsung Galaxy S10 phones, I was offered phones by Verizon, AT&T and Samsung. I never know when they are coming — the emails just ask whether I’d be interested in a handset to review.

For a phone of this caliber, I just say yes to everyone.

As you might guess, last week I got three S10 phones on the same day.

AT&T and Samsung provided an S10+, and Verizon sent the smaller S10.

So I’m blessed with an overabundance of S10 phones to review, and I want to thank all three companies.

Like Apple did last fall, Samsung has released three models of the Galaxy S10.

The S10 phones look like last year’s S9 phones, but once you light up the screen, you’ll see the difference. The screen really does go edge to edge. The S10+ display takes up more than 93 percent of the front face of the phone.

Unlike the iPhone, which uses a notch to house its cameras and sensors, the S10 phones use a hole in the actual LED panel. It looks like someone used a hole punch. I like the design choice.

The sleep/wake button is on the right, while volume and a button to invoke Samsung’s artificial assistant Bixby are on the left side.

Bixby isn’t as popular as Siri or OK, Google, but it is gaining in popularity. If you don’t want to use it, the button can be remapped to launch other apps.

The charge/sync port on the bottom is USB-C, and there is still a headphone jack.

The S10 and S10+ have different size Quad HD+ Dynamic AMOLED Infinity-O displays, but they both have a resolution of 3,040 by 1,440 pixels and the displays are HDR10+ certified.

They both have 8 gigabytes of RAM and are available with 128 GB or 512 GB of internal storage.

The S10+ also has a model called the Performance Edition with 12 GB of RAM and one terabyte of storage.

They also have a microSD card slot for added storage.

The phones run Android 9 (Pie), and they both have a Qualcomm Snapdragon 855 processor.

Wireless options include a newer, Bluetooth 5.0 and a newer, faster WiFi called 802.11ax.

The phones are IP68 dust- and water-resistant. They can be submerged in 1.5 meters of water for up to 30 minutes.

They can both charge through their USB-C port or wirelessly (at 15 watts), and they can both wirelessly charge other Qi-compatible devices. I was amused to see the S10+ charging my iPhone XS Max.

Of course, being able to give your friend’s phone some power is great, but remember, as his phone is charging, yours is discharging.

Everyone has seen smartphones with dual cameras on the back, but the S10 and S10+ have three main cameras. The lenses are 26mm (wide), 52mm (telephoto) and 12mm (ultrawide).

The phones have a 26mm (wide) selfie camera, but the S10+ adds a depth sensor that allows for live focus mode shots.

I first saw live focus when it was introduced as portrait mode on the iPhone X. Those shots can be adjusted after the photo is taken to change the amount of blur in the background.

Samsung takes that feature and makes it better.

S10 Users can see and adjust the amount of blur in portrait mode pictures on the screen before the shot is taken.

There are also three other live focus effects called zoom, spin and color point. You can see and adjust the amount of blur in all these effects before or after you shoot.

The phones can capture 4K video as well. Both phones have optical image stabilization.

The S10 phones are the first I’ve seen with a fingerprint reader under the screen. You set up your fingerprint to unlock the phone, but instead of a physical button or sensor, the screen shows you where to press your finger to register the prints.

It works well, but you do have to mash down on the screen with your finger to get it to read. I’m spoiled by my experience with Apple’s home button/fingerprint sensor, which needs only a very light touch to work.

I was asked to press my finger down harder more than a few times when I tried to unlock the S10.

The S10 phones can also be unlocked by facial recognition.

The trio of S10 phones are available from Samsung or from all the major cellphone companies.

This is the 10th iteration of the Galaxy S series of phones. Samsung has done a great job in letting the design evolve and be refined.

Adding ultrawide cameras and under-the-screen fingerprint sensors along with being able to charge other phones are great feature additions.

Keeping popular features like microSD card expansion and headphone jacks keep us older users happy. I still have some very expensive headphones I like to use.

The S10 phones are lightning fast. The speed of the Snapdragon CPU and the 8 GB of RAM make the phones a joy to use.

Each year I find that the latest Samsung phones are the best Android phone available, and I’m ready to say it again.

If you’re worried about the high price of these phones, don’t overlook the S10e. I didn’t get to test it, but I’ve been reading really good things.

Sure, there are only two cameras on the back and the fingerprint sensor is on the side and the screen is smaller, but overall, the S10e has a lot of features in common with the more expensive S10 models.

Cons: Not much. A little expensive.

Bottom line: If you’re looking for the best Android phone, you can’t go wrong with the S10.

‘Screen Time’ is a Good Start to Curbing our Smartphone Addiction

15 Best Apps for Entrepreneurs and ‘Gigpreneurs’

‘Screen Time’ is a Good Start to Curbing our Smartphone Addiction

15 Best Apps for Entrepreneurs and ‘Gigpreneurs’