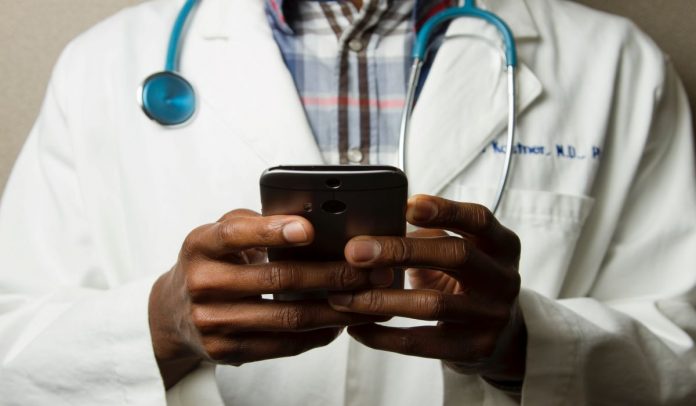 Smartphone apps and connected devices that largely have seen niche use in the telemedicine context are likely to see a significant growth as online and remote consultations with doctors during the COVID-19 pandemic become more routine and established in the months to come.

The devices and apps range from ones that are worn like a skin patch and monitor vital signs to transmit data to doctors to ones that a parent uses to send high-quality images and video of a child’s throat and ear to a physician. They also include apps that employ artificial intelligence technologies to detect signs of pneumonia from a person’s cough.

While most telehealth connections between doctors and patients are being done through common audio and video apps including Zoom, WhatsApp and Facetime, “it would be a lot more powerful if we are able to add more information,” said Joseph Kvedar, vice president of Connected Health, and the president-elect of the American Telemedicine Association. “What information does a doctor need to make a diagnostic decision or make a change in a care plan and communicate it to you?”

Kvedar, professor of dermatology at the Harvard Medical School and co-author of a book, Internet of Healthy Things, said use of devices and technologies to connect patients and doctors “are going to blossom.”

Devices and technologies that enable so-called asynchronous connection, allowing a patient to send information or a picture that a doctor can review at the end of a day and respond with a diagnosis or a recommendation, are the “obvious next steps,” Kvedar said. Such communication would not tie up a doctor’s time with a live call during a work day.

On the horizon are devices and apps that can help patients do blood testing at home or capture biomarker signals recorded by smartphones that can then be sent to physicians for evaluation of possible underlying causes, Kvedar said.

The increased use of telehealth services during the COVID-19 pandemic could lead to a significant increase in demand for new technologies in the coming years, market forecaster Frost & Sullivan said in a May 13 report.

The need to maintain social distancing will lead to an “unprecedented demand for telehealth, which involves the use of communication systems and networks to enable either a synchronous or asynchronous session between the patient and provider,” Victor Camlek, healthcare analyst at Frost & Sullivan, said in a statement accompanying the firm’s report.

While private, employer-based healthcare systems have embraced telehealth services in recent years, the onset of the pandemic has resulted in an expansion of such services for publicly funded patients after the Centers for Medicare and Medicaid Services waived restrictions on the use of remote consultation services for Medicare users. Bipartisan groups of lawmakers are seeking to extend the use of telehealth services for government-paid patients even after the pandemic ends.

Some U.S. hospitals already have been experimenting with sensors and devices to help patients transition to home care without having to endure prolonged hospitalization.

In January, the Annals of Internal Medicine published findings of a pilot program run by the Brigham & Women’s Hospital in Boston showing that a so-called hospital-at- home program, which monitored recently discharged patients using remote sensors connected to doctors’ smartphones as well as other home-based care, could “reduce cost, health care use, and readmissions while improving patient experience.”

Companies emerging to fill the need

VitalConnect, a San Jose, Calif.-based company, makes a disposable biosensor called VitalPatch, which the company says is about the size of a Band-Aid and can be glued to a patient’s chest. The device has built-in electrodes to measure heart rate, accelerometers to detect motion, and technology to detect body temperature, according to the company’s website. The device also can be linked to other devices to measure blood pressure, blood oxygen levels and respiration, and send all the data wirelessly to a physician or hospital.

Trapollo, a technology company that’s owned by Cox Communications, has seen a surge of demand since COVID-19 for its software program that enables remote monitoring of patients.

“In addition to the monitoring software, many organizations are seeking medical devices such as thermometers and pulse oximeters to monitor patients and even get employees back to work,” Victor Cooper, a spokesman for the company, said in an email. “So far, Trapollo has procured and delivered tens of thousands of non-connected devices in response to the COVID-19 outbreak.”

Kvedar said makers of consumer-oriented medical apps and devices are trying to figure out a way to get more people to buy and adopt them.

Sales of pulse oximeters, devices that measure a person’s heart rate and blood-oxygen level, have likely gone up in the last two months, driven by news reports that a drop in oxygen levels in one’s blood is a likely indicator of the onset of COVID-19, he said. Consumers may similarly take to buying other devices for home use, he said.

Tyto Care, a company based in New York and Israel, makes a handheld exam device for home use along with an app that can help a parent, for example, examine a child’s ears and throat, listen to the lungs and send the information to a physician. Or they can conduct the exam under the guidance of a doctor, Kvedar said.

Livongo, based in Mountain View, Calif., makes an app that’s connected to blood pressure and diabetes monitoring devices and alerts a physician when readings are out of range. It can also provide feedback and expert coaching to alter users’ lifestyles.

ResApp, an Australian company, makes a smartphone app that can diagnose chronic and acute respiratory illness based on the recording of a patient’s cough, said Kvedar, who advises the company.

“From the sound of your cough it can detect pneumonia, bronchitis or asthma,” Kvedar said. To diagnose such conditions, “typically a doctor wants to listen to your lungs, but this can obviate that need. Lots of applications like that are likely to emerge in the next few years.”