Home Lifestyle Arts & Entertainment Regina King Has Been on the Road to ‘Watchmen’ for 25 Years.... 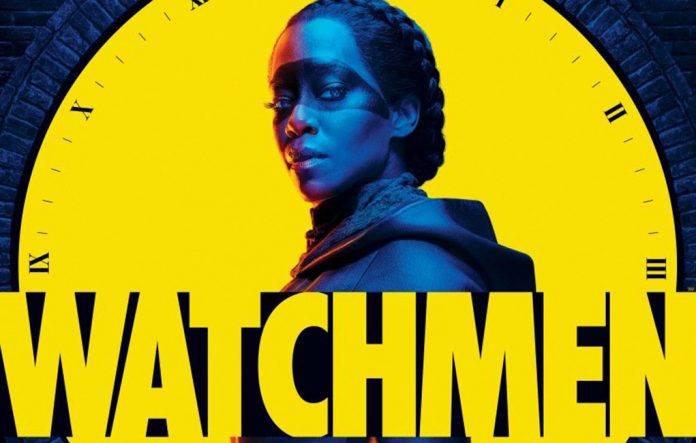 One of the most striking images of the year in pop culture centers on a masked crime fighter.

Gracing billboards, buildings and buses over the summer was the promotional poster for “Watchmen,” HBO’s reimagining of the revolutionary graphic novel.

Much of the poster’s boldness stems from its historical significance: “Watchmen.”

But “Watchmen” also represents the latest and perhaps most prominent milestone in King’s triumphant career, to the point that her performance has been singled out as one of the keys to the series’ success. Since starting her Hollywood résumé in 1995 as a teen in the NBC sitcom “227,” King has steadily worked in numerous films and TV shows, and in the last 10 years has ascended into the top ranks of the Hollywood elite, collecting an armful of awards and thunderous critical acclaim along the way. And after years of supporting roles or shared leads, she is the undisputed star of “Watchmen.”

Her earlier projects included such impressive and varied fare as the films “Poetic Justice,” “Jerry Maguire” and “Ray,” as well as TV series “24” and voice-over work in animated series “The Boondocks.” King’s featured role in the ensemble of the groundbreaking police drama “Southland” was the turning point in her journey to three Emmys — two consecutive supporting actress trophies for playing two different characters in ABC’s anthology series “American Crime” and a lead actress Emmy for her role as a mother anguished over the death of her son in a traffic accident in Netflix’s racially charged limited series “Seven Seconds.” She won an supporting actress Oscar earlier this year for the James Baldwin drama “If Beale Street Could Talk.”

While King says she is particularly proud of “Southland” — about the frenzied professional and personal lives of Los Angeles police officers — she downplays her achievements when asked to assess this stage of her career. She isn’t even fully caught up on “Watchmen” itself.

“I’m just loving life, living life day by day,” King said in a phone interview. “I really have not sat back to think about what the last 10, 15 years have been like. I live more in the moment. It’s like anyone’s trajectory in life. I’m working to obtain certain goals and make choices based on the current situation.”

But Damon Lindelof, the creator of “Watchmen” and HBO’s “The Leftovers,” which also featured King, said Hollywood has taken notice of her power and talent.

“She’s reached the point where it’s undeniable,” Lindelof said in a phone interview. “Everyone understands universally where she is. And I don’t think she’s reached the apex yet — she will continue to do work that surprises. That notion that she is not at the top of the mountain yet is incredibly exhilarating. That poster has been waiting for her for a very long time. It not only shows her as forceful and prominent. She is above the word ‘Watchmen,’ which is not associated with someone who looks like Regina. She deserves to be above the word. And she is supporting it as much as the word is supporting her.”

“Regina is chameleon-like,” Ridley says of her work in ABC’s limited series, which focused on issues of race, class and culture and had a core repertory company of actors including King, Felicity Huffman, Timothy Hutton and Lili Taylor. “She can do comedy, drama, action, voice-over. She has an amazing sense of self, where she can look at material and understand if it’s just a job or something in her career path. She knows what is good for her or what she is capable of excelling at. Once she decides she’s going to take on that material, she cares about it and excavates as much as she can.”

Her range has been on full display in “Watchmen.” She gets to show off her action chops as Sister Night, pursuing and beating up villains, while her switch to the crime fighter’s alter ego, Angela Abar, has allowed King to be softer, sexy and vulnerable.

In the last few years, she has branched out, moving into the director’s chair and helming episodes of several series, including “This Is Us,” “Insecure,” “Shameless” and “The Good Doctor.”

As the curtain comes down on “Watchmen,” King has been focused on prepping her feature directorial debut, “One Night in Miami,” an adaptation of Kemp Powers’ play about a dramatic (and fictional) meeting among boxing champ Cassius Clay — before he became Muhammad Ali — activist Malcolm X, singer Sam Cooke and football great Jim Brown.

Speaking from New Orleans, where she is in preproduction on the film, King maintained she has no direct philosophy or message she’s conveying in the types of projects she chooses. But she did detail what factors are important to her.

“I look at the people involved,” she says. “That’s one of the biggest criteria. I look at their body of work. Knowing you’re working with people who are interested in collaborating puts me in a place where I can connect with the vulnerability I have to tap into as an actor. There are just stories that are interesting or intriguing to me. It’s a taste thing. I know that if I like it, I can live with it as far as being a performer who is involved in it. I just come to things as an audience member. Then I feel like I will have no regrets. So far, so good. I don’t think I’ve ever had to say, ‘I wish I hadn’t done that one.’”

The actress, who is the mother of an adult son, added, “A lot also has to do with where we are in society. Being a mother also changes you, how you respond to things. You’re looking at life through the lens of a child.”

In the first season of “American Crime,” King played a devout Muslim woman who is the sister of a murder suspect and meth addict. Although she loves her brother, she constantly lashes out at him for having a white girlfriend, who also happens to be a meth addict. In the second season, she portrayed the mother of a high school basketball player who is suspected in a sexual assault.

Ridley said the two different characters had the potential to be polarizing and stereotypical, but King was able to dodge those landmines. “She found the humanity in both. It’s masterful how Regina can find the flaws in the character and make them human.”

Moving forward, King said she would like to continue both acting and directing: “They both inform the other. Directing made me a better actor, and being an actor has given me strength as a director.”

The actress has one other field she’d like to conquer.

“I eventually want to get onstage,” she said. “I want to feel that immediate energy from the audience. That’s definitely something I would love to experience.”