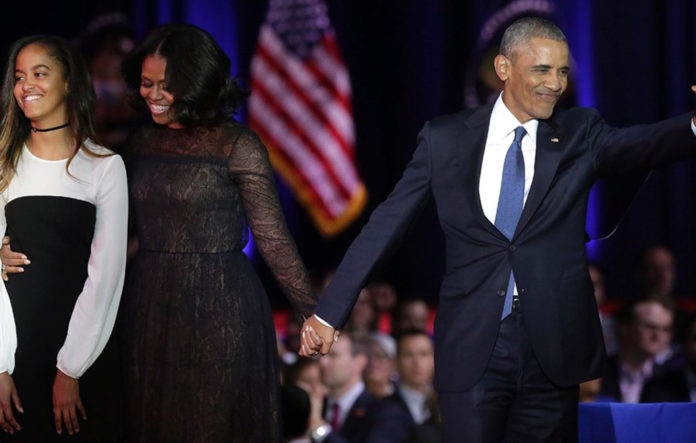 There’?s something about Barack Obama.

Last night, President Barack Obama addressed a throng of fans, constituents, celebrities and well-wishers in Chicago who cried, laughed, rejoiced and cheered while the 44th president of the United States of America, the nation?s first African-American president, gave his final, farewell address after two terms in office that he won handily.

First off, several minutes passed before he could even speak. Thunderous applause and chants of ?”4 more years!?” drowned out his attempts to be heard. ?”You can tell I?’m a lame duck president because no one is following instructions,”? he joked.

It was evidence that he is just as popular and beloved now, if not more so, as he was in his early days at fundraisers and speaking engagements during the 2007-2008 presidential election campaign season. For those of us who were fortunate enough to have attended some of them, it was phenomenal to see people clamor over each other just to get a photograph, a handshake or even a glimpse of the handsome Illinois senator, with a smile that wouldn’t quit, who would later become the leader of the free world. Women of all ages were crushing on Barack Obama, but when he took office, and we saw how he conducted himself, how he loved his wife and children, how he kept his head held high while Republicans shot down every great idea he had, how he worked diligently to repair the collapsing U.S. economy, and how he united people, our respect and admiration grew even deeper.

So, we weren?’t surprised when his first order of business, just minutes into his speech, was to thank the American people for their support of him during his two terms in office, and later when he made it a point to tell us that it has been the honor of his lifetime to serve us. The pleasure was all ours, I?m sure, but he is a class act through and through and always finds a way to uplift others. From the beginning of his campaign, every step of the way, his camp routinely sent out messages to supporters affirming that, “We’re in this together.” That spirit of inclusivity has carried through to his final days in office. Last night, he recalled his numerous interactions with people across the nation and said, ?”Those conversations have kept me honest, inspired and kept me going. You made me a better person and a better president.?”

And when he saluted his wife and said, “?Michelle LaVaughn Robinson, girl of the South Side ? for the past 25 years, you have not only been my wife and mother of my children, you have been my best friend. You took on a role you didn’t ask for and you made it your own, with grace and with grit and with style and good humor. You made the White House a place that belongs to everybody. And the new generation sets its sights higher because it has you as a role model. So you have made me proud. And you have made the country proud.?” President Obama shed a heartfelt tear, as did others, including his daughter Malia.

He did touch on voting rights, immigration, civil rights and other existing problems, and he touted some of the accomplishments that came out of his administration such as marriage equality, healthcare for all, the restoration of the auto industry, job creation leading to improved unemployment rates and the riddance of high-profile terrorists. We all know that he had even more in store for the country had the opposing party been more cooperative, but “?America is a better, stronger, place than it was when we started,?” he noted.

The big focus of the night was his appeal to us to be a part of the democratic process in our country. Just as he said 8 years ago, ?he said again, “We are the ones we’ve been waiting for. We are the change that we seek.”? Last night, he reminded us that we, ourselves, must carry on the tenets of democracy. “?Our democracy is threatened whenever we take it for granted?we should rebuild our democratic institutions?insist on transparency?it falls to each of us to be those anxious, jealous guardians of our democracy; to embrace the joyous task we’ve been given to continually try to improve this great nation of ours. Because for all our outward differences, we, in fact, all share the same proud title, the most important office in a democracy: Citizen,”? our president told us.

He encouraged us to get involved when we are disappointed with the way things work. It’s what “our democracy demands,” he remarked. “It needs you. Not just when there’s an election, not just when your own narrow interest is at stake, but over the full span of a lifetime. If you’re tired of arguing with strangers on the Internet, try talking with one of them in real life. If something needs fixing, then lace up your shoes and do some organizing. If you’re disappointed by your elected officials, grab a clipboard, get some signatures, and run for office yourself. Show up. Dive in. Stay at it.”

And in a return to his rallying cry from eight years ago that got Americans excited and inspired by the possibility of his becoming president, our president said, ?Yes, we can.”

Only this time, eight years later, he added, ?Yes, we did.?

Five Things You Should Never Pay For