Home Lifestyle Auto Porsche 911 GTS is the Quickest, Fastest and Most Popular Carrera 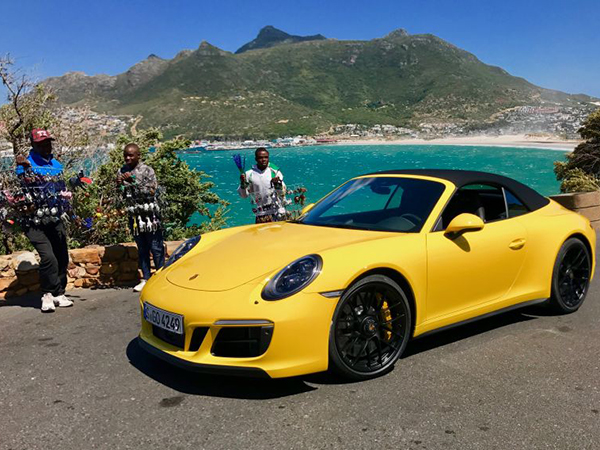 Most people know what a 911 is even if they mispronounce ?Porsche? as one syllable. Since 1963, the rear-engined sports coupe with a wide butt and bulbous eyes has enchanted drivers and oglers alike with peerless handling and adrenaline-pumping responsiveness. It may be the only car to earn the tired adjective ?iconic.?

If there?s no mistaking a 911, why is it so hard to keep track of which one does what? To start, there are 22 iterations of the current seventh-generation model, ranging from the Carrera in rear or four-wheel drive to the face-melting, widow-making $293,000 GT2 RS. In between are hard top (Targa) or soft top convertible (Cabriolet) options or the track-oriented Turbo.

To add to the confusion, turbos aren?t just for the Turbo anymore. Porsche downsized its naturally aspirated flat-six engine for 2017, but added twin turbochargers for more power and efficiency.

So where does the GTS fit in? If you take away anything from this slow-spooling lead in, let it be that the GTS is not only the most popular 911, accounting for 20 percent of 911 sales, but it is also the best value, according to Porsche.

GTS is the most powerful Carrera, slotting just below the track-oriented Turbo. It?s also priced about $65,000 less than the Turbo S.

Calling a $125,900 sports coupe a value seems patronizing until you get behind the wheel. From the first turn of the key ? yes, Porsche makes drivers put the fob in a slot ? firing up the twin-turbo flat-six engine puts a little goose in your bumps. The growl isn?t as hungry as its naturally aspirated predecessor, but the fire-whipping turbo note just under 2000 rpm at full throttle slingshots the car into lanes that look like sheet music ready to play play play.

GTS is essentially a Carrera 4S with all the performance options. The Powerkit included in the GTS but optional in the 4S provides a boost of 30 horsepower and 37 pound-feet of torque, for 450 and 405, respectively. The extra power comes from larger turbochargers and more pressure, punching the manual-transmission variant to 60 mph in 3.8 seconds, according to Porsche. That?s two-tenths quicker than the 4S.

That?s value. The standard seven-speed manual feels as if it?s an extension of your body, left foot and right hand dancing with the engine. The clutch feels responsive to the intent, casual around town and more springy in spirited driving, or so it seemed. The manual is not as quick as the PDK automatic transmission, however.

Is the manual better than the PDK? Are dogs better than cats? Really depends on the person.

The standard sport exhaust opens its flaps to yield a hungrier, deeper sound. Switch modes with the controller on the narrower sport steering wheel to get more sonic delights from the engine.

There?s plenty to play with, including a spoiler that emerges automatically at about 55 mph or by the push of a button, or a button to raise the front suspension 1.5 inches ($2,590) over the curb or speed bump so that you don?t scrape the splitter on the SportDesign front fascia (a $2,990 option on Carrera). SportDesign also includes center locks instead of 5 lug nuts on the 20-inch wheels.

The handling and braking are where it?s at on the GTS. There?s simply more you can do at higher speeds, from taking a cloverleaf ramp at 60 mph or raging through an S curve at ridiculous speeds. GTS lets the driver go further than was previously thought possible and that, more than anything, is what all that money buys.

Of the $15,000 in options, the 18-way adaptive sport seats ($3,025) were especially comfortable, snug in turns but comfy while cruising. Once folded into the car there is a spaciousness to the podlike cabin. Part of that sense comes from ergonomic placement of controls for the driver. The infotainment system is narrow, voice commands are optional at no charge, and the best thing about the multimedia is the vehicle info gauge to the right of the speedo. You can access most of the stuff in the screen, but with the sport steering wheel, you have to use a stalk on the column instead of steering wheel controls.

We tested out the 2+2 seating arrangement with two tweens in the back for a weekend jaunt. While it was pleasant for no one, kids can fit in back in a pinch. The kid gear was stowed in the frunk, which is surprisingly deep enough to satisfy a separate run to Costco, with overflow purchases riding shotgun. Not your typical 911 GTS uses.

As a sport-optioned top-of-the-line Carrera, with a few add-ons you can?t get on Carrera, GTS upholds the Porsche proposition of being the value buy and ? that word again ? the icon of the sports coupe world.

Parting shot: Carrera with all the performance options.

Used Car Buyers May Not Be Told Of Auto Recalls