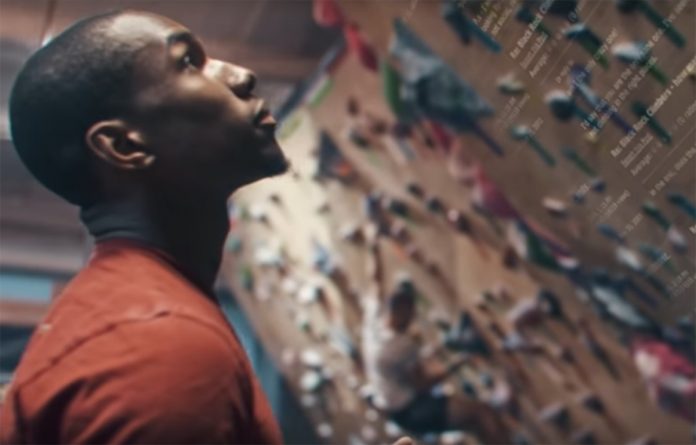 Chyncia Smith hadn’t touched a rock climbing wall since high school, but here she was, strapped into a harness and dangling 20 feet above the ground at Philadelphia Rock Gym in Wyncote, Pa.

Smith was doing her best to hang on to two particularly slippery handholds as she scaled a tricky spot — made trickier by the fact that some of the footholds were no bigger than wads of chewing gum.

“I really wish I had some chalk right now,” Smith called down to Tarik Moore, who belayed her, keeping the rope she was attached to steady and secure. “My hands are so sweaty.”

The scene played out at the second local meetup for Brothers for Climbing, an organization trying to diversify the rock climbing community by making it more inclusive and welcoming. The Brooklyn-based group tapped Moore and fellow climber Jason Hinds to establish a Philly-area following.

“Rock climbing has always been seen as a leisure sport,” Moore said. “It’s for people who have a lot of time to train and go out on adventures. In the past, a lot of people of color haven’t been exposed to that.”

To make the activity more accessible, Brothers for Climbing participants can choose between climbing for free or signing up for a half-off package that includes classes on bouldering, top roping, and a two-week-long trial membership.

The meetups take place every third Monday of each month at Philadelphia Rock Gyms, which have five locations in the area. At the second meetup, Moore and Hinds saw attendance triple, from five people to 15.

Shawn Wilson, one of Hinds’ cousins, brought along his wife, Shannon, and their 8-month-old son, Shawn Jr. Hinds belayed him through his first attempt, talking Wilson through where to move his hands and feet.

“It was more challenging than I thought,” Wilson said. “It requires fine motor skills for sure.”

Moore first got into rock climbing a year and a half ago through a friend. “I decided to start because I needed to find something to stay in shape,” he said. “I wound up really liking how chill the vibe was in the climbing community, so I just kept doing it.”

Moore convinced Smith, his co-worker at a private accounting firm in Malvern, to come along for the second meeting. Smith said that while she enjoyed her time on the wall, she would never pass by the rock climbing gym and think to go in by herself.

“It’s intimidating when you first come in!” she said. “There are ropes everywhere. I’d love to come back though. It’s really exciting to work through. You really have to strategize about every move you make.”

Hinds — who got into the sport after watching a friend climb in Yosemite National Park — said that while many of his friends and family think that rock climbing is cool, they often need a push to get involved.

“There are definitely people of color who see climbing as something cool, but they don’t know how to get into it. They don’t know if it’s for them,” he said. “I felt like I could be one of those people, along with Tarik. We’re here to show them it’s for anyone.”

Les Ambassades Expands with a Taste of Africa and Paris in...

Sheila Coates’? BYOB Helps You Define Your Own Brand