By Alberto Alerigi and Thais Freitas

SAO PAULO (Reuters) – Brazil’s meat exports have fallen sharply since a police investigation into alleged bribery of food-sanitation inspectors in the world’s top beef and poultry exporter sparked a wave of trade bans, an industry group said on Friday.

Restrictions by several key importers of Brazilian meat, ranging from China to Europe, caused a 22 percent drop in weekly average exports of pork and poultry since news of the federal police probe broke on March 17 compared to prior weeks, the Brazilian Animal Protein Association said.

Police have accused more than 100 people, mostly inspectors, of taking bribes in exchange for allowing the sale of rancid products, falsifying export documents or failing to inspect meatpacking plants at all.

Prosecutors have yet to present charges and the police allegations have not been proven.

Meat industry officials have sought to downplay the impact of the probe, known as “Operation Weak Flesh,” saying 33 arrests made so far pointed to only isolated cases of wrongdoing.

But Planning Minister Dyogo Oliveira was less sanguine in comments to journalists in Sao Paulo on Friday.

“It will clearly have some (economic) impact, but we still do not have a clear idea of the dimensions,” Oliveira said.

BRF SA <BRFS3.SA>, the world’s biggest poultry exporter, and JBS <JBSS3.SA>, the No. 1 beef producer, are among dozens of firms that have been targeted in the police probe. Both companies have denied wrongdoing and assured consumers that their products meet rigorous quality standards.

BRF said late on Friday it was taking additional measures to further guarantee the quality of its products, including creating a group that will work with independent firms to certify the company was following strict international standards.

Fallout from the investigation grew on Friday as officials in Hong Kong called on supermarkets to stop selling meat from 21 Brazilian plants targeted by police.

China also agreed to lift restrictions on Australian beef imports, adding to competition for Brazil in one of the world’s fastest-growing markets.

Vytenis Andriukaitis, the European Union’s health and food safety commissioner, said a visit to Brazil next week would include a meeting with Agriculture Minister Blairo Maggi to discuss sanitary measures among other topics.

Diplomats told Reuters on Thursday that the EU had asked Brazil to voluntarily suspend all shipments of meat to its member countries to avoid a more cumbersome formal ban.

The probe into Brazil’s meat industry is a setback for its powerhouse farm sector, which has been a rare bright spot amid the country’s worst economic recession on record.

Brazil, Latin America’s biggest economy, is one of the world’s leading exporters of staples from coffee and orange juice to sugar and soybeans. 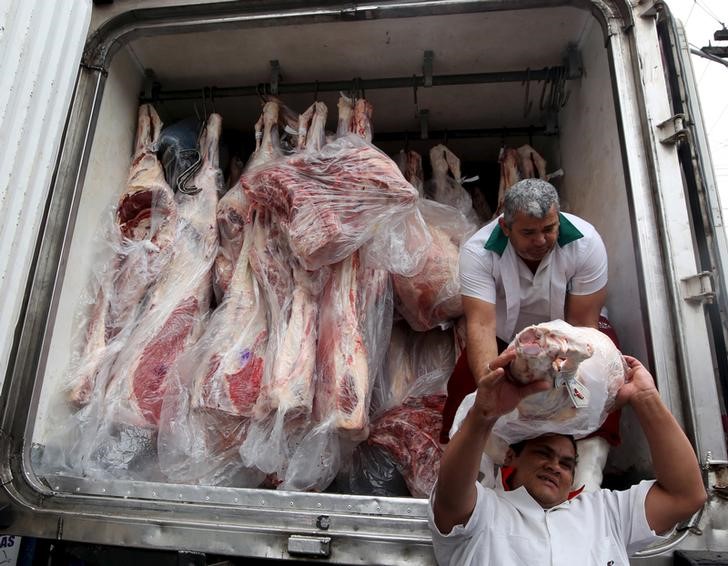