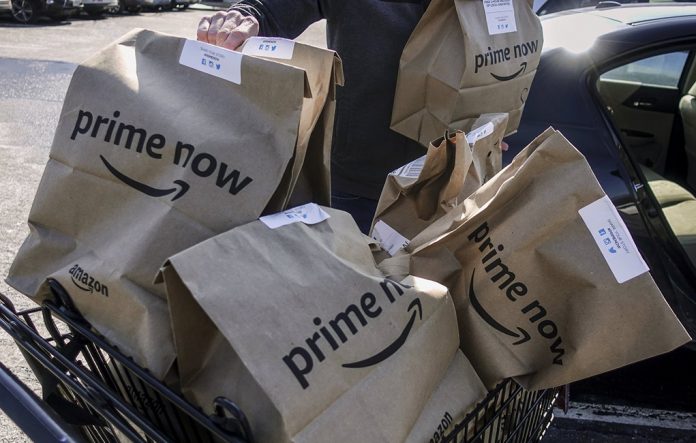 For gig-economy drivers working to serve a coronavirus-driven surge in demand for delivery, the weekend was a frenzied rush as shoppers placed grocery orders and some systems appeared overwhelmed, at least temporarily. Volumes also were abnormally high Monday.

“This was definitely the weekend where you can tell that all of Seattle was freaking out,” said one driver who ferries passengers, groceries and packages around the region for Uber, Lyft, Instacart and Amazon.

E-commerce delivery, which has grown rapidly in the past two decades, could take on an even bigger role with a population that appears increasingly uneasy about going out in public.

While many physical retailers were jammed and running out of items including toilet paper, medicines, water and bananas, other shoppers sought to avoid the stores altogether, relying instead on services such as Amazon and Instacart. As the outbreak worsens, more people may turn to e-commerce, analysts and survey data suggest.

“Delivery might be much better than going to a store, both for society and for individuals,” said Karan Girotra, a professor of operations and technology at Cornell University. “But it means that delivery workers will be at the front line of this challenge.”

More than 27% of 1,121 U.S. internet users surveyed by Coresight Research in late February said they were already avoiding public places such as shopping centers and entertainment venues, while 58% said at the time they would do so if the outbreak worsened.

That should bode well for e-commerce companies, said Tom Forte, analyst and managing director at investment firm D.A. Davidson. But it also poses challenges to supply chains and delivery networks.

“The challenge for Amazon, for GrubHub, for everyone is what if your workforce gets sick?” Forte said.

The contract workers who handle a large and growing share of deliveries are not like a traditional employed workforce that may be more loyal and willing to step up in difficult times. They don’t get health-insurance benefits or paid sick days.

E-commerce companies “have less control if a lot more people are going to start buying online (and) they need to ramp up their capacity,” Girotra said.

The platforms may need to change their protocols or offer protective equipment, already in short supply around the globe, to attract more workers to deliver to a population in self-quarantine, he said.

In many cases, drivers can leave deliveries on the doorstep without interacting with the customer, but sometimes they must check identification or obtain a signature. Some drivers have begun using hand sanitizer before and after ID checks, while some customers are applying disinfectant to grocery bags, said the gig-economy driver, who asked not to be identified for fear of reprisals from the companies.

“People are definitely changing their behaviors a little bit,” he said. “But in the gig world, the money’s there and it’s good (particularly) when this kind of stuff hits.”

Gig-economy platforms use algorithms to set prices for discrete jobs, depending on demand. He said Amazon was offering more than normal in recent days, particularly for some grocery delivery routes. Tips from customers can be more of a mixed bag.

“I’ve got an Instacart batch for 43 things and it’s got a $5 tip on it,” the driver said, looking at his phone and declining to take that shopping trip Monday afternoon. “People just don’t get that there’s humans doing that shopping for them and don’t adjust accordingly.”

The driver said Uber, Lyft and Instacart had provided some guidance on how to respond to the coronavirus, largely in keeping with recommendations of public health officials, and admonishing drivers not to discriminate based on race or national origin. Amazon had provided no communication to people using its Flex program, in which individuals sign up to make deliveries for a set price, one carload at a time, the driver said.

Amazon did not respond to a request for comment. Instacart said in a statement that customer demand surged in recent days, and the company is following recommendations “to ensure we’re operating safely with minimal disruption to our service, while also taking the appropriate precautionary measures to keep teams, shoppers and customers safe.”

The driver said an Amazon delivery station in Tukwila, which sends out Amazon grocery orders, was running hours behind Saturday, with drivers standing around waiting for their delivery routes. Bloomberg News reported Monday that Amazon was warning customers that both its Prime Now and Amazon Fresh delivery services had limited availability.

“It was just a complete meltdown,” the driver said, adding that the situation seemed to improve as the weekend went on, and delivery routes out of other area Amazon facilities were not so far behind schedule. He was concerned that late deliveries stemming from these demand surges would be marked on his record.

Forte said he was notified by Amazon over the weekend that a regularly scheduled shipment of ibuprofen wouldn’t be arriving with his subscribe-and-save order, and that the company didn’t know when its stocks would be replenished.

“After a call to customer service, where the rep attributed the shortage to the coronavirus outbreak, we discovered all the alternatives were also unavailable,” Forte wrote in a note to investors.

Girotra said that most products in short supply appear to be a result of panicked shopping rather than actual supply constraints. However, he warned, panicked buying and hoarding can kick-start a cycle that leads to real supply limitations.

Under Armour?s Vision for Future Manufacturing: Make Local for Local

US Economy Improving Despite Global Events