Home News Business Offices Are Continuing to Change. Here Are 8 Trends to Look for... 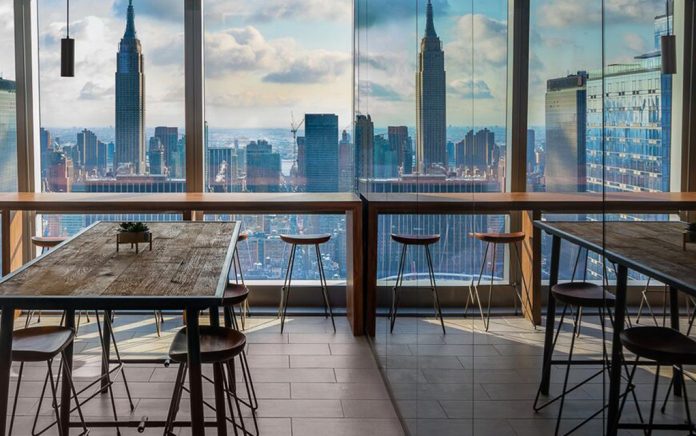 Companies and building owners throughout the Twin Cities have invested millions this year to re­design and renovate their offices to better suit their organizations and appeal to workers.

Modern kitchens with high-top seating, collaboration areas made for informal meetings, and adaptable office furniture with standing desks have all become the new standard for office renovations.

While many of those features are predicted to still be prevalent in 2019, architects and designers say new design trends have emerged, with some clients investing in more privacy for their open offices, heavily branded design that reflects their company ethos, and more adaptable layouts.

Many clients want their workspace to reflect their company, a marketing tool that helps organizations stand out to prospective clients as well as a way to reinforce company culture among employees.

“They are really coming up with unique ways to define themselves,” said Natasha Fonville, brand manager of Minneapolis-based Atmosphere Commercial Interiors. “That beautifully branded experience is really going to keep trending and keep elevating the spaces around us.”

At the new downtown offices of Sleep Number, the company’s emblem is throughout the space on the wall and ceiling with Sleep Number settings on some of the tables.

At Field Nation’s new offices downtown, which were completed this summer, a network of orange piping that runs electricity to light fixtures was designed as a representation of a technological network.

Some companies have decided to do away with front-desk receptionists, sometimes using technology to direct guests to where they need to go or having a more informal entry area.

Betsy Vohs, founder and chief executive of design firm Studio BV in Minneapolis, said 75 percent of her clients don’t really need a receptionist to answer calls or greet guests. “Having them at the front desk isn’t the best use of their time and energy,” Vohs said.

At the new Hopkins offices her firm has helped to design for Digi International, the company opted to skip the front-desk receptionist and use the space for an entry lounge with a coffee bar and a digital kiosk.

This past summer, Studio BV designed the offices of Field Nation, which also doesn’t use receptionists.

Adaptable space has also become more of a priority as many companies have reduced the square footage dedicated to individual employees. With workers more nomadic, many new offices are currently designed to allow for rearrangement of the furniture layout and changes to walls and partitions.

“I think it’s just a sign of our times that workplaces are being so agile and really adapting to how people work best … and that’s always evolving,” Fonville said.

At Atmosphere’s downtown office, the walls are moved about once a year. For example, the company recently noticed that employees weren’t using some of the office enclaves, so leaders decided to take out a few walls to allow for more breathing room and larger meeting areas.

As offices have become more open, one side effect has been that sound can carry throughout the space, making audio privacy a concern. Many new offices have private call rooms. Companies also have requested other sound-dampening materials such as acoustic foam, felt, drapery and carpet, Vohs said.

The recently renovated RSM Plaza downtown has similar cutouts in its lobby. Some companies go as far as installing white-noise machines throughout their offices.

Much has been said about how current offices have been designed with millennial employees in mind, but designers have already begun to shift gears to interpret how the younger Gen Z might use their spaces. After millennials, defined as being born between 1981 and 1996, Gen Z is the newest defined generation. Gen Z is believed to be more realistic, social change-oriented, tech-integrated and interested in on-demand learning, said Rich Bonnin, a design principal at HGA in Minneapolis.

“These aren’t the decisionmakers now, but they will be,” he said, at a recent broker event at the St. Paul Curling Club organized by real estate company Newmark Knight Frank.

Gen Z workers are more likely to value face-to-face interactions, shared space, choice-rich environments, security and the natural as well as the digital experience, he said.

More architects have begun to incorporate design standards to advance workers’ health and well-being. WELL certification is still a relatively new concept that explores how design can help workers live better through improvements in air, water, light, fitness and other areas.

“It has kind of become the new LEED,” said Derek McCallum, a principal at RSP Architects in Minneapolis, which now has WELL-certified staff.

The 428 office building in St. Paul was WELL gold-certified and has high-level air filtration close to hospital grade, added water filtration, and a prominent and open staircase to promote physical activity.

Companies are studying and surveying their employees more to make informed design decisions.

For the new headquarters for Prime Therapeutics in Eagan, external consultants studied the company’s previous offices to determine how much square footage per person was being used and the operational costs of the space.

They interviewed employees and observed to how they worked. Data showed that desks were sitting empty about 60 percent of the week, with people opting for shared spaces, said Kim Gibson, the company’s senior director for real estate workplace.

“We really wanted to understand how people were working and the things that they desired to help make them more productive,” Gibson said. The data helped Prime Therapeutics and architecture firm HGA create different spaces to accommodate workers, such as one-on-one spaces and private “oasis rooms.”

The amenities race continues for many multitenant offices, with landlords investing heavily in community space and building perks such as modern gyms and lounges with high-end furniture. Many downtown Minneapolis office buildings have undergone recent rehabs of their amenity spaces, including RSM Plaza and the AT&T Tower.

Piedmont Office Realty Trust, the owner of U.S. Bancorp Center, plans to spend about $7.5 million to create a tenant-amenity space on the top floor of the tower. The building is more than 98 percent leased, but the company wanted to continue to improve the building, said Thomas Prescott, executive vice president of the Midwest region of Piedmont.

“It’s the right thing to do, enhancing our asset,” he said. “We’re excited. We’re making a significant investment in a building that’s mostly leased.”

A large stairway will lead up to the space that will feature a full fitness facility, tenant lounge, conference area and a game room with a golf simulator.

Big Business vs. Small at Edge of Fiscal Cliff

What Happens to Neighborhood Appeal if COVID-19 Closes Small Businesses