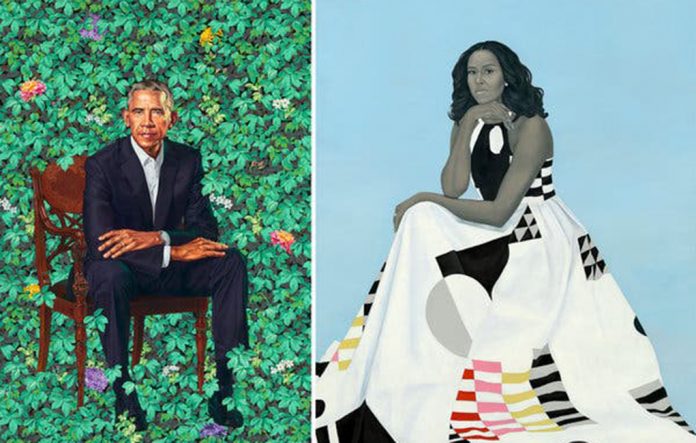 Celebrated paintings of Barack and Michelle Obama from the Smithsonian’s National Portrait Gallery will embark on a five-city tour in summer 2021, the museum announced Thursday, giving residents in Los Angeles, Chicago, New York, Atlanta and Houston a chance to see in person the works that sparked a media frenzy when they were unveiled in 2018.

Kehinde Wiley’s official portrait of President Obama and Amy Sherald’s painting of the first lady, like the Obamas themselves, broke boundaries. L.A.-born, New York-based Wiley and New York-based Sherald were the first African American artists to be chosen by the National Portrait Gallery for such commissions. Times art critic Christopher Knight wrote that their works “cheerfully buck the official portrait trend of instantly forgettable painterly pablum.”

The other participating museums are the Art Institute of Chicago, where the exhibition will debut in June 2021; the Brooklyn Museum; the High Museum of Art in Atlanta; and the Museum of Fine Arts, Houston.

The Michelle Obama portrait, an oil on linen, is elegant and direct, conveying confidence and self possession. The artist’s use of color — or lack thereof in the gray-scale skin tones — is Sherald’s attempt to “exclude the idea of color as race,” she has said. But the billowing skirt of the dress, by American designer Michelle Smith, is adorned with colorful, geometric patterns. That dress, the designer has said, was part of a 2017 Milly collection inspired by a “desire for equality, equality in human rights, racial equality, LGBTQ equality.”

Wiley’s 7-foot-tall oil on canvas depicts President Obama seated, casually, on an antique wooden chair. Wearing a navy suit and open white shirt, sans tie, he appears restrained yet approachable. The vibrant backdrop of lush foliage includes flowers from locations that are significant to Obama: African lilies from Kenya, a nod to his late father; jasmine from Hawaii, where Obama spent most of his childhood; and chrysanthemums, the official flower of Chicago, where he was elected senator.

The portraits — for which Steven Spielberg and Kate Capshaw were among the lead donors — have been a hit with the public. Since they premiered, they have drawn a record number of visitors to the National Portrait Gallery in Washington, D.C., a museum representative said. Director Kim Sajet chalked up the exhibition’s popularity to more than a love of portraiture, or even love of the Obamas. She said visitors were coming in such high numbers “to be part of the communal experience of a particular moment in time.”

“This tour is an opportunity for audiences in different parts of the country to witness how portraiture can engage people in the beauty of dialogue and shared experience,” she said in the tour announcement.

The National Portrait Gallery is free to the public, but all the museums on the tour will charge admission to see the paintings. A representative from the National Portrait Gallery said it chose museums offering some periods of free admission each month. At LACMA, that free period is the second Tuesday of the month; L.A. County residents also get in free after 3 p.m. on weekdays.

During other periods, LACMA will charge its standard admission fee of $20 for L.A. County residents and $25 for those who live outside the county. Some discounts are available for children and seniors.

“Out across the land, a culture war is raging,” Knight wrote when the portraits debuted. “It’s the source of the unprecedented public response to this Smithsonian commission, which far surpasses the unveiling of any presidential portrait before it.”