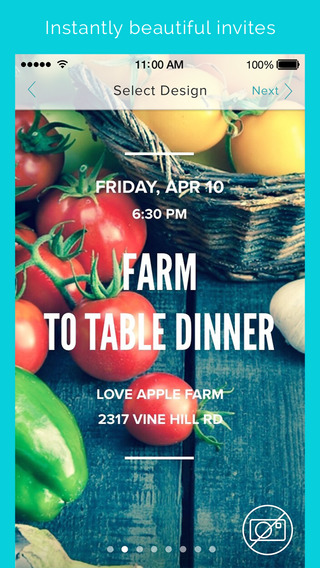 There are a number of services today that allow you to create and send digital invitations to birthdays, parties and other events, where the invites themselves are sent out via email, social networks, or even by postal mail if you choose. But a new application called Hobnob, launching now, is designed instead to support invite delivery entirely via SMS and MMS. This means recipients will receive the invites immediately, the company says, and organizers in return will get prompt RSVPs.

As someone who has sent and responded to my fair share of Evites and?Facebook Event invites in the past, I get the appeal of this app. In fact, I hacked together just this sort of thing for myself in the past. I saved a screenshot of the paper invite I was sending out for?my daughter?s birthday party, which I?then texted around to friends and family. It was just easier that way.

Hobnob co-founder and CEO Tina Fitch, previously the CEO of travel commerce and loyalty platform Switchfly, found herself facing a similar situation. She says she couldn?t believe she was still receiving?invitations to events via Evite emails filled with ads. Meanwhile, she noticed that Facebook Event users often failed to RSVP.

?I found myself organizing and discussing these types of events via group text, not social media or email,? explains Fitch. But that had its drawbacks, she says. ?Group text is fine for chat, but is annoying for things like group events where you get random comments from people whose number you don?t recognize at all hours of the night. And it doesn?t get anyone excited about the occasion,? she adds.

That?s how she came up with the idea for an app that would let you build invites that looked great on the phone, while also supporting the conveniences of group texting without the annoyances. She then asked longtime friends?Mark Quezada (co-founder of FastCustomer and CardBux) and Tiffany?Quezada, whose background includes event management and fashion, to help her build Hobnob.

The Hobnob app itself is as easy to use as any other invite app. You begin by entering details about your event, including the event name, location, start time and date, and, optionally, the end time and date. You can pick?one of several designer templates provided by swiping through the various previews, or you can upload your own photo or design.