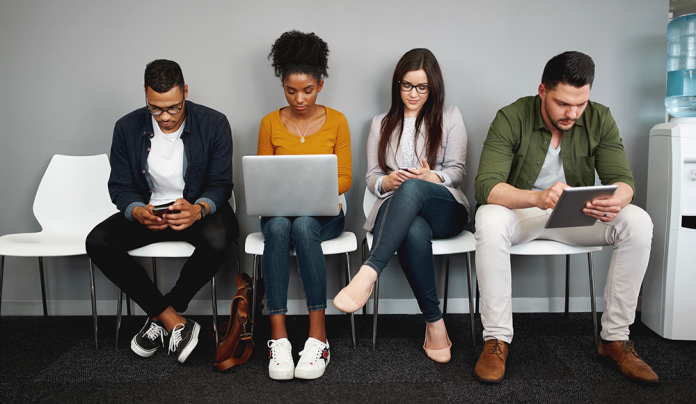 Responding to the current national period of reflection on race, NBCUniversal News Group Chairman Cesar Conde has set a goal of having a 50% diverse work force across his division.

No timetable has been set for the target Conde set in an internal video sent Tuesday to employees and obtained by The Times. There are around 3,000 employees across the units in the division — NBC News, MSNBC and CNBC — with 27% of them people of color.

Conde, who took over the group in May and is the first Latino to run a major English language network TV news division, devised the diversity plan after meetings with employees across the division about diversity and coverage of the Black community following the death of George Floyd in Minneapolis police custody on May 25, which has led to a racial reckoning in companies throughout the country.

Newsrooms in particular have held frank discussions about the diversity makeup of their organizations and the treatment of Black employees as they grapple with how to approach coverage of protests over police and racial bias.

Those discussions have already led to changes in several media organizations where management was found to be unresponsive to concerns about diversity and fair treatment in the workplace. Barbara Fedida, a senior ABC News executive, has been under investigation for racist remarks she allegedly made about talent at the network including “Good Morning America” co-host Robin Roberts. Fedida is currently on administrative leave.

No single incident led Conde to release his plan, although many employees wanted to see a firm commitment to improve diversity and not just talk, said one person who participated in the meetings who was not authorized to comment.

“We want to increase diversity and inclusion both in front of and behind the camera, and earn the trust of every community in America that relies on us for exceptional journalism,” Conde said. “We realize that this is an ambitious objective and it will of course take time to do in a proper way. We understand this is a challenging time to start this effort but there are always reasons to say, ‘Not now.’ To get there tomorrow, we have to start today.”

Conde, who is the former chief of NBCUniversal’s Spanish-language network Telemundo, said the current 27% diversity level is “better than most in our industry — but it is not good enough.” The breakdown is 8% Black, 8% Latino, 8% Asian, 2% multiracial and less than 1% Native American. Women make up nearly 50% of the workforce in the news division.

Conde, who is calling the initiative the “50% Challenge,” said he wants the division to reflect the demographic trend in the country. He said this year for the first time a majority of Americans aged 18 or younger will be people of color. In 20 years, that data point will apply to the entire population.

Conde said NBCUniversal News Group will commit to expand its searches for diverse candidates to fill its entry-level news associate positions in order to create a pipeline for future management positions. The company will also be “creative” in compensating interns so that there is no economic inequity in the ranks. The company will also step up the use of its online education program offered to journalists and producers.

On the editorial content side, Conde committed to investing in more long-form documentaries that examine the issues facing communities of color. The company is also including progress on diversity as part of its performance reviews of its leadership team.

Conde’s move is an attempt to get the NBCUniversal News Group out in front of the diversity issue and perhaps avoid the kind of turmoil that consumed the division in recent years over sexual harassment.

The division was been roiled for years by the firing of former “Today” co-host Matt Lauer over inappropriate behavior in the workplace in November 2017.

The company also suffered an embarrassing blow as it passed on Ronan Farrow’s reporting on the sexual assault allegations against disgraced movie mogul Harvey Weinstein. Network executives said Farrow was unable to meet NBC News standards for getting the story on the air and allowed him to take his work to the New Yorker. He shared in a Pulitzer Prize for his work.

Female Scientists Receive on Average About $40,000 Less in Federal Funding