Home News African American NAACP Comes Out for ?United We Stand? Rally in Support of NFL... 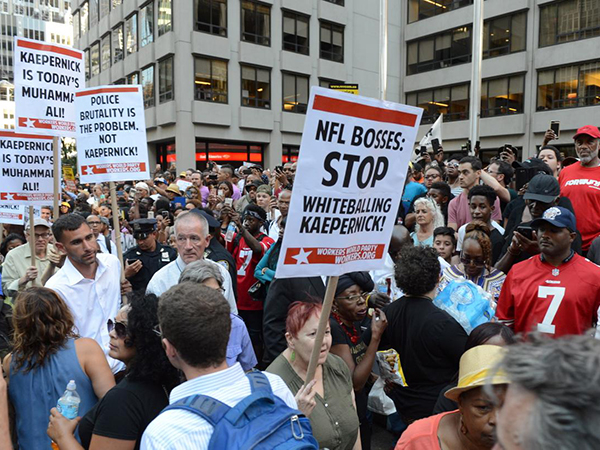 This week, the NAACP and other civil rights groups came out in large numbers for a rally that took place at the NFL?s headquarters at Park Avenue in New York City to make the case for NFL Player Colin Kaepernick who has yet to be signed for the new season after, in 2016, he chose not to stand for the U.S. national anthem that is usually performed at the start of football games. He kneeled instead.

His decision came on the heels of widespread cases of police brutality against black men. In many of these cases, juries, if the case even goes to court, have found the officers to be innocent, even when video shows excessive force. In other cases, the officers are placed on administrative leave – with pay.

“I am not going to stand up to show pride in a flag for a country that oppresses black people and people of color. To me, this is bigger than football and it would be selfish on my part to look the other way. There are bodies in the street and people getting paid leave and getting away with murder,” Kaepernick said of his position on the subject.

The rally was held to address the issue.

We recently spoke to Anthony Davis, Jr., the administrative coordinator of the NAACP?s Youth and College Division, to get his takeaways on the rally. Below is an excerpt of what he shared with TNJ.com:

?Moving forward, we see the power that the people have when we work together. At the rally on Wednesday, we saw faith-based organizations such as the AME church, social organizations, civil rights organizations such as the NAACP, the Women?s March and the People?s Consortium coming together to show our ?people power,? and to show the NFL that we represent a much larger contingency of people. There were 1,500 people at the rally, but each of those people represents way more people in their individual communities and in their individual organizations.

As a takeaway for me as a youth and college coordinator, it?s clear that this movement is taking on a younger face. The Black Lives Matter organization gave a surge of millennial and young activists taking the forefront of the movement, and after the rally it was even more obvious that young people are willing to pick up the baton and run with it; they are willing to lead this next generation of the civil rights movement.

Regarding Colin, some media outlets have dumbed-down the issue, but we understand that this is about much more than Colin having a job this year, and I believe he understands that too. The big issue now is that we want the NFL to protect the players? freedom of speech and first amendment rights. We want the NFL to create a policy where players will not be victimized, vilified or discriminated against in terms of a job opportunity just because of their freedom of speech ? regardless of the issue they choose to speak out on.?

Davis went on to say that at this juncture, the NAACP is awaiting a response from a letter NAACP interim President and CEO Derrick Johnson sent to the NFL Commissioner Roger Goodell. Below is an excerpt of that letter:

?Last season, Mr. Kaepernick chose to exercise his first amendment right by protesting the inequitable treatment of people of color in America. By quietly taking a knee during the national anthem, he was able to shine a light on the many injustices faced by people of color, particularly the issue of police misconduct toward communities of color. As outlined in your office?s public statement, this act of dissent is well within the National Football League?s stated bylaws. Yet, as the NFL season quickly approaches, Mr. Kaepernick has spent an unprecedented amount of time as a free agent, and it is becoming increasingly apparent that this is no sheer coincidence.? No player should be victimized and discriminated against because of his exercise of free speech ? to do so is in violation of his rights under the Constitution and the NFL?s own regulations.?

Both Davis and NAACP State President Hazel Dukes spoke at the rally that was touted as the largest demonstration ever held outside of the NFL?s headquarters.

?This issue of athletes using their right to free speech to take a stand on issues has always been an important one in our community,? said Dukes. ?Right now, the action of the league seems to imply to young black men that this league, which is comprised of 70% African Americans, only values Black lives if they are wearing a football uniform.?

It’s worth noting that after Kaepernick’s decision to kneel, many other football players began doing the same – some even holding a fist in the air reminiscent of the 1968 Olympics Black Power salute.

Clarice Taylor of ‘The Cosby Show’ Dies at 93