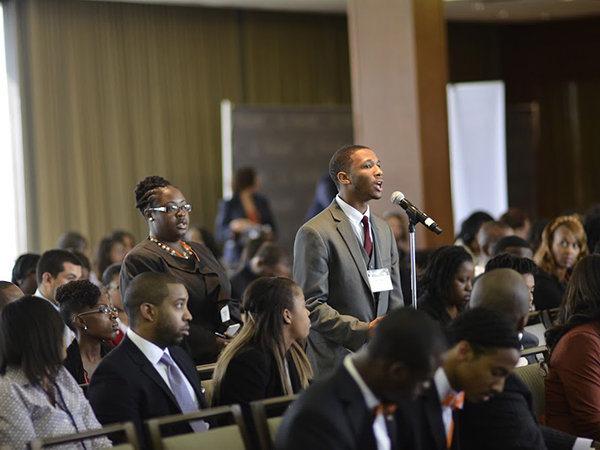 Business and tech conferences are on the rise and two to catch this summer are the MOBE (Marketing Opportunities in Business and Entertainment) Conference, taking place in Atlanta, Georgia from August 17-20 and TechConnect, to be held during the National Urban League annual conference in St. Louis on July 27th and 28th. The latter focuses on emerging technologies and the intersection between racial justice and social change.

One of the sessions that will be offered is a ?Comcast Hack-A-Thon for Social Justice.? With the help of teams of students, developers and designers, a social justice app will be created during the session that will ultimately enable the Urban League to address issues of public safety, voting, education, jobs, justice, housing, civic engagement and health.

Other topics to be covered include one on branding, building and selling; one on ?buying black? and one that takes a look at African American influencers in digital media and entertainment.

“Too often technology is seen as an ambiguous buzzword that our community doesn’t know much about,? said Felix Flores, National Director of TechConnect partner #YesWeCode.??In the worst cases, it’s villainized and associated with gentrification.? Hackathons offer a chance for people with different experiences to dive into the tech world by working in teams, learning from each other and showing how efficient and productive people can be using tech tools.? It’s important that organizations like the National Urban League and #YesWeCode band together to demystify tech and get people to change from consumers to creators.? That is the key to our future economic empowerment.”

The MOBE Conference, created in 1992 and dubbed as a leading advanced marketing symposium and strategic entertainment alliance, will star a lineup of top presenters from a variety of industries to connect the next generation of leaders, innovators and creators with the most influential brands and companies worldwide.

In a recent interview, MOBE Co-Founder Yvette Moyo told TNJ.com that the idea for the conference came from her intimate knowledge of the corporate world and people in the entertainment industry. ?At the time, I was working with clients on the corporate side such as Gillette, Seagrams and Random House, among others, and at the same time, I also represented BESLA (Black Entertainment Sports and Lawyers Association), for which our company was a major fundraising entity,? shares Moyo.

She continues, ?After being exposed to both sides having sold sponsorships and produced strategic alliances between groups, organizations, and events from entertainment to fundraisers, it was apparent to me that the people in music and entertainment really wanted to know the folks in corporate America and vice versa. So, I called together people from both areas and that became MOBE.?

Created in 1992 and having produced 22 conferences, the MOBE brand has been a success despite a small setback of not having the conference for around 12 years due to economic factors and industry changes. According to Moyo, MOBE officials have been able to track $200 million in business being generated by people who have attended the conferences. ?One attendee reported to us that, for example, she had gotten $150,000 in Revlon orders; another attendee said he made considerable revenue for a 3-year period due to some work he did with Bronner Bros., etc. This valuable feedback has been how we?ve been able to track the success of the conference,? Moyo says.

Some of the sessions to look forward to at next month?s conference include Producing Content for a Multiplatform Marketplace, presented by iONE Digital & One Solution President Detavio Samuels; and the Digital/Tech forum presented by Aleeta Bell, CEO & founder of Plugh, and Terrence X. Johnson, TCJ Aero Tech, LLC. Presenters include Nzingha Shaw of the Atlanta Hawks, and Michiel Perry of Black Southern Belle.

?I think there is a huge missed opportunity for people on both the creative and the media sides, where I do a lot of sales. People don?t realize that brands have a lot of money to put into this space so the opportunity to leverage brand dollars is definitely there to help people accomplish what they want done in the content space, help them reduce their costs and create a stream of marketing dollars to help promote the content,? he adds.

Notes Moyo, ?In a time where we?re talking about both social and economic justice, now more than ever we need the MOBE conference. You have to be in the room talking about new ideas, new techniques, new strategies and new energy. And that?s where the millenials and experts who are taking the baton come in. We have to pass the baton, and we have to have a forum to do that.?

This year’s MOBE conference was organized and sponsored by Tirrell Whittley, CEO of Liquid Soul, an Atlanta based marketing agency.