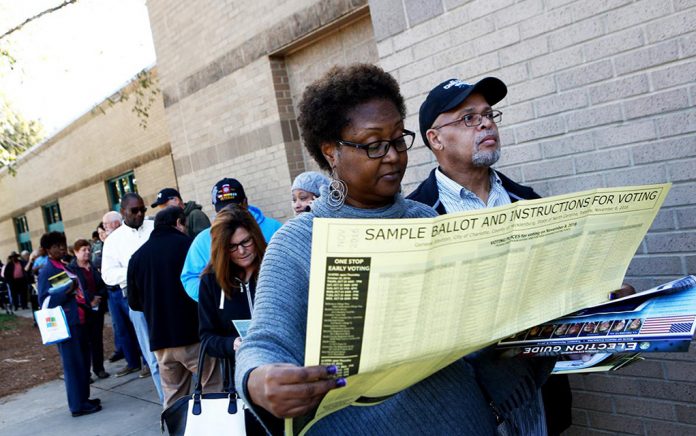 Hoping to encourage voter turnout for the highly charged Nov. 6 midterm election, a growing number of companies are giving employees a half or full day off on Election Day, essentially paying them to go to the polls.

Going beyond the hodgepodge of state laws, which may or may not allow employees to leave work for a few hours to vote, hundreds of businesses — including several in Chicago — have committed to more generous policies that in some cases include closing up shop for the day.

“Being able to take the time to vote is a real barrier for most Americans, and companies are very well-positioned to remove that roadblock for their employees,” said Colette Kessler, director of partnerships for Vote.org, a two-year-old nonprofit aimed at increasing voter turnout.

The right to leave work to vote varies from state to state, ranging from no specific accommodations to several hours of paid time off. Most but not all states prevent employers from penalizing workers who take time off to vote.

But busy workdays, long lines and difficult logistics nonetheless keep many employees away from the polling booth on Election Day. A study by the Pew Research Center found that 14 percent of registered voters — millions of people — didn’t cast a ballot in the 2016 presidential election because of a conflicting work or school schedule.

In Illinois, the polls are open from 6 a.m. to 7 p.m. on Election Day, making it a challenge for many employees to squeeze voting into their workday. State law gives employees two hours of unpaid leave to vote, with one day’s advance notice. Employers may decide when the hours are taken.

“If you’re working a typical 9-5 work shift, your employer doesn’t haven’t to give you anything,” said Matt Dietrich, a spokesman for the Illinois State Board of Elections. “They’re not required to give you two hours within the day, at your leisure, to go and come back.”

More than two-thirds of states, including Illinois, offer some form of early voting, but Election Day policy is the logical focal point for companies with regional or national footprints.

In March, Vote.org launched ElectionDay.org, an initiative for companies to encourage voter participation by giving employees paid time off. Chicago-based businesses like software firm Jellyvision and Out-U-Go pet care services are on the list of about 300 participating companies, which also includes Etsy, Patagonia and Levi Strauss.

“Companies are implementing new policies that make it easier for them and easier for their employees and that also stretch beyond the bare minimum to create consistency when they have a national workforce,” Kessler said.

More and more Illinois companies are going beyond the letter of the law in allowing Election Day time off, either through formal policies or flexibility.

Centro, a Chicago-based advertising technology company, is giving its 700 employees a half-day off on Election Day to encourage voter turnout among its mostly millennial workforce. About 300 employees are in Chicago, with the rest scattered across more than 20 states.

Riegsecker said the decision was driven by studies showing poor voter turnout among millennials in the 2014 midterms and his concerns that their voices be heard in the upcoming election, where the balance of political power — and their future — could be at stake.

“We have significant long-term issues that we need to solve,” Riegsecker said. “In my opinion, that’s going to fall on the backs of millennials.”

Riegsecker, who considers himself a political independent, said there is no partisanship in his Election Day time-off policy, but he is nonetheless lobbying hard for 100 percent employee participation. He said the company asked all employees to take a selfie with their “I Voted” sticker for a video montage, which would also provide a rough accounting of voter participation.

“We encourage you to do it, and we’re giving you the time to do it, so it’s an expectation going forward,” he said.

David MacNeil, a megadonor to President Donald Trump’s inauguration and founder of southwest suburban car floor mat manufacturer WeatherTech, didn’t offer up a specific plan for Election Day, but he said in an email that the company’s 1,600 employees would all get enough time off to vote.

“For the last 29 years, WeatherTech has supported and encouraged employees to exercise their right to vote, and we have always accommodated employees’ special needs when it comes to needing extra time to make their voice heard,” MacNeil said.

SRW, a 3-year-old Chicago advertising agency, is giving its staff of 25 mostly 20-something employees a paid day off on Election Day.

“Democracy should trump commerce,” said Charlie Stone, 50, co-founder and CEO of the agency. “We really want to encourage folks to engage and participate, regardless of their philosophy.”

Stone said the agency is a hotbed of political dialogue with a “strong collection of opinions.”

“We encourage everybody, regardless of their opinion, to express it, and the best way to express it is to vote,” Stone said. “You’re more likely to vote if you’re paid to vote.”

Server market woes likely to grow as year goes on

Black engineers conference will discuss jobs and the economy.