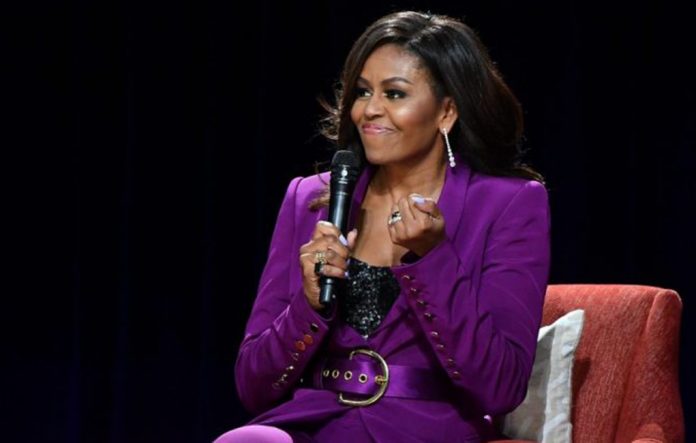 Nearly a year after kicking off a rock star-style book tour that sold out stadiums across the country, former first lady Michelle Obama has announced the publication of her second book, officials said.

But instead of focusing on her own unique journey, this time Obama will ask her readers and supporters to reflect on themselves. Titled, “Becoming: A Guided Journal for Discovering Your Voice,” Obama’s book will be released Nov. 19. It is published by Clarkson Potter, an imprint of Penguin Random House.

The book will feature an introduction written by Obama along with more than 150 questions and quotes that aim to compel readers to fill in answers about themselves. The journal is meant to be a companion to Obama’s bestselling memoir “Becoming” and will cost $19.99 in the United States.

Obama’s second book was announced Monday morning and comes nearly a year after she released her memoir. That book was released Nov. 13, 2018, and sold more than 11.5 million units across print, digital and audio formats.

In her memoir, Obama wrote about growing up in South Shore, her family, her experiences attending elite universities and how she eventually met the man who became the first African American president of the United States. While she was applauded for writing openly about dating, marital conflicts, struggling to get pregnant and President Donald Trump, she was also criticized by some for not aggressively writing about enduring racism and systemic inequalities.

She kicked off her book tour in Chicago with a conversation at United Center with talk-show host and media mogul Oprah Winfrey. Her international book tour took her to Brooklyn, New York, Philadelphia, London and Paris.

Obama is expected in Chicago later this month when she will appear at the 2019 Obama Summit. That gathering is hosted by the Obama Foundation and brings together dozens of thought leaders, social innovators and organizers from across the globe.

Who Will Buy the Panthers? Here Are Some Possibilities