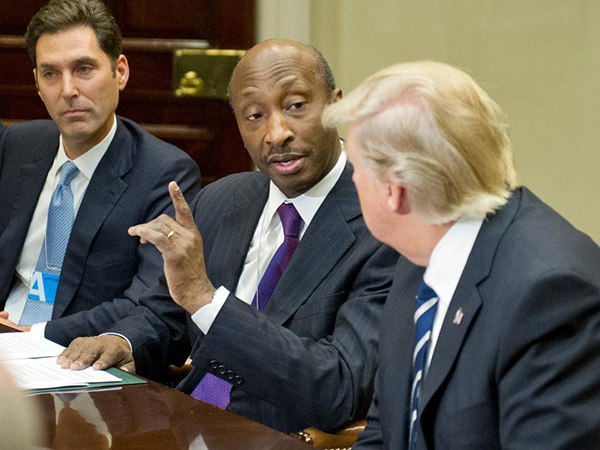 Last week, Merck & Company’s Chairman of the Board and CEO Kenneth C. Frazier made a bold move in exiting President Trump’s American Manufacturing Council amid controversial remarks the president made regarding a white nationalist rally in Charlottesville, Virginia, last Saturday that left one counter-protestor dead and more than a dozen injured when a white supremacist drove his car into a street filled with people.

Instead of laying blame squarely on the driver of the car and the torch-carrying white supremacists who were shouting racial and neo-Nazi slurs, Trump stated in a heated exchange with reporters on Saturday, August 12, “I think there is blame on both sides. You had a group on one side that was bad. You had a group on the other side that was also very violent. Nobody wants to say that. I’ll say it right now.”

Many found his comments to be reprehensible, especially since he failed to call out the groups by name and denounce their mission. (After mounting pressure from both Democrat and Republicans critics over the weekend, he denounced the groups on Monday but by Tuesday, went back to his “both sides” argument.) In effect, critics said Trump was equating counter-protestors who showed up to fight against bigotry with white supremacists, members of the KKK and neo-Nazi groups who stand for racism and hate towards African Americans, immigrants and Jews.

The situation did not sit well with Frazier who was named CEO of the NJ-based pharmaceutical giant in 2011 and joined the Council on January 27.

“I am resigning from the President’s American Manufacturing Council. Our country’s strength comes from its diversity and the contributions made by men and women of different faiths, races, sexual orientations and political beliefs. America’s leaders must honor our fundamental values by clearly rejecting expressions of hatred, bigotry, and group supremacy, which run counter to the American ideal that all people are created equal,” Frazier said in a statement on Monday. He added, “As CEO of Merck, and as a matter of personal conscience, I feel a responsibility to take a stand against intolerance and extremism.”

Frazier, the only African American executive on the council, led the charge; others followed suit.

Kevin Plank of Under Armour and Brian Krzanich of Intel were next to jump ship later the same day. By Tuesday, Scott Paul who serves as president of the Alliance for American Manufacturing also exited.

“I resigned to call attention to the serious harm our divided political climate is causing to critical issues, including the serious need to address the decline of American manufacturing. Politics and political agendas have sidelined the important mission of rebuilding America’s manufacturing base,” Krzanich said in a post on Intel’s website.

“I have already made clear my abhorrence at the recent hate-spawned violence in Charlottesville, and earlier today I called on all leaders to condemn the white supremacists and their ilk that marched and committed violence,” he continued. “I resigned because I want to make progress, while many in Washington seem more concerned with attacking anyone who disagrees with them. We should honor?not attack?those who have stood up for equality and other cherished American values. I hope this will change, and I remain willing to serve when it does.”

“The current environment must change, or else our nation will become a shadow of what it once was and what it still can and should be,” Krzanich added.

This isn’t the first time members of one of Trump’s advisory councils vacated their council positions due to actions or remarks made by the president. In June, Tesla CEO Elon Musk promised to quit the President’s Strategic and Policy Forum, a council dedicated to job creation and economic activity that featured top executives including GM’s Mary Barra, JP Morgan’s Jamie Dimon, and Disney’s Bob Iger, if the president moved forward with his plans to pull the U.S. out of the Paris Climate Accord. Iger left as well.

As for Frazier, who served as general counsel in Merck’s public affairs division in 1992, executives have praised his decision to take such a stand. Roy Vagelos, who serves as chairman of Regeneron, said, “I applaud his decision to step down. Ken is driven by a strong sense of morality in everything he does and he continues to make me proud.”

Chris Simmons, who sits on the governing board of PricewaterhouseCoopers told TNJ Senior Editor Sergie Willoughby, “I think, in Frazier’s decision to exit, he sent a message to his own employees about what he stands for as a leader. Had he remained on the council, it could have impacted affiliations with other entities and recruiting. People pay attention to the leaders of the companies they are going to work for.”