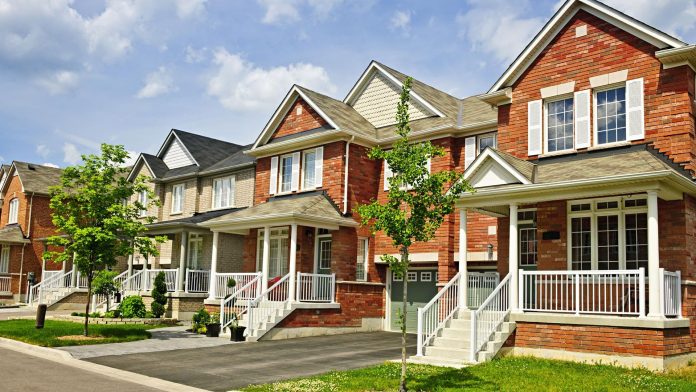 More space and nearness to family were the main motivations behind Jamie and Alan Rhode’s decision to move from their apartment in Philadelphia’s Fairmount neighborhood to the Plymouth Meeting area. The Rhodes, who both work in finance, planned to rent outside the city for a year or two before buying a house. Then mortgage rates continued to fall.

“We definitely wanted to buy and take advantage of the opportunity with the low rates,” Jamie Rhode said. They are on a month-to-month lease while they look for the right house.

“We thought it would be a great time — that we might not see in the next generation or so — to buy,” Alan said.

The national average 30-year fixed mortgage rate fell to 2.98% in mid-June, the lowest level since Freddie Mac, the federally chartered mortgage investor, began tracking rates in 1971. The average rate ticked up slightly to 3.01% last week. The Industry forecasts expect the average rate to hover at or just above 3% through the end of the year.

At the same time, economic uncertainty during the pandemic has led banks to tighten their lending standards. The supply of mortgage credit has fallen by more than 30% from February to June, according to the Mortgage Bankers Association’s measure of how easy it is to get a home loan.

So historically low mortgage rates make now an attractive time for potential buyers of means with stable jobs, but qualifying for a mortgage has become more difficult for lower-income households.

Darlene Meekins, a Realtor with Realty Mark Associates, based in Montgomery County, Pa., said the raising of minimum credit scores by 100 points — a move she’s seen some lenders make — “really makes a difference as far as someone in the low to moderate range qualifying.”

“Because of the (stricter) qualifications, some people are struggling to meet those,” said Meekins, president of the Philadelphia metropolitan chapter of the National Association of Real Estate Brokers, a group of mostly Black real estate agents whose mission is ensuring fair housing and promoting homeownership for people of color.

On top of stricter lending standards, housing inventory has stayed low, restricting choices for buyers, helping to drive up home prices, and fueling bidding wars. Some renters who want to take advantage of low mortgage rates and were close to buying a home will put those plans on hold because of income lost during the pandemic.

But for those who qualify for mortgages, low rates help counteract rising home prices and boost purchasing power. In the first quarter of 2020, when the 30-year fixed mortgage rate was 3.57%, the average national monthly mortgage payment with a 20% down payment was $995, according to the National Association of Realtors. That’s down from a $1,048 average monthly payment a year ago, for savings of $636 annually and roughly $19,000 over the 30-year life of the loan.

Borrowers with lower credit scores can still qualify for some loans. Mortgage advisers and housing advocates recommend buyers talk to a variety of lenders to find the best loan and rate for their situation. Rates can vary widely.

Affordable Housing Centers of Pennsylvania, which aims to increase housing opportunities for low- and moderate-income households and communities of color, is warning clients about the tighter credit requirements. Before the pandemic, several lenders required a minimum score of 580 for Federal Housing Administration loans with down payments of 3.5%, said Kenneth Bigos, the nonprofit’s executive director. Those same lenders are now requiring a minimum of 640, he said.

The scores of most of the organization’s clients hover right around this figure.

“You want to be a well-qualified buyer in this market,” said Jeff Ruben, president of WSFS Mortgage, “because demand is so high, and supply is so low.”

Ruben said lenders have to be cautious in the face of economic uncertainty, which is why outside of government-sponsored loans, “the loans that we’re making today are subject to a much tighter standard” than ever before. In addition to raising minimum credit scores, WSFS and other lenders have less tolerance for debt relative to a buyer’s income.

“As an industry, we just start tightening to make sure we’re only capturing the very, very best, and the most likely to succeed,” Ruben said. Thirty years “is a long time to be in partnership with someone, and you’re not sure they’re going to have the same income earnings as they do today.”

Lenders want to reduce their risks and keep hold of their cash, which means both tightening credit standards for lower-income borrowers and restricting the lending of “jumbo” loans for wealthy borrowers, said Joel Kan, associate vice president of economic and industry forecasting at the Mortgage Bankers Association.

“Low rates help people stay competitive in this environment, and also stick closer to the house they really wanted” instead of getting outbid or settling for a lesser house, Kan said.

Especially during the economic downturn, home buyers need every bit of a leg up they can get, he said.

For the last month, weekly numbers of applications for new mortgages have been higher than they were at this time last year, “which is pretty amazing” considering the pandemic’s hit on the economy and the slowing of the real estate market in the early months of the health crisis, Kan said.

Taylor Marr, a lead economist at Redfin, said that for buyers with great credit scores who can afford large down payments, “they’re locking down some of the best rates that have ever been recorded in history.”

But Michael Jensen, cofounder of the San Diego-based mortgage information website FreeandClear.com, pointed out that more people are taking advantage of low mortgage rates across the credit spectrum. Over the last few months, there has been an uptick in government-backed mortgages for which applicants typically have lower credit scores, he said.

But, Jensen said, “if we don’t see a consistent improving of the economy, which is tied to COVID-19, then we could see tighter lending standards, and that’s not good for anybody.”

Robert E. Tait, a loan originator with Motto Mortgage, said he’s seeing clients in the Philadelphia area whose credit scores range from the mid-500s to the low 800s and advises those in the lower range to pause their home search for a few months while they improve their score to get the best mortgage rate.

When rates were higher in April, “there was still good demand, but there wasn’t the sense of urgency,” he said.

“Interest rates are certainly driving the market more than they typically would if the rates were a point or a point and a half higher,” Tait said.

Bigos of Affordable Housing Centers of Pennsylvania said he encourages potential home buyers to take advantage of current mortgage rates “if they feel their place of employment is secure during this pandemic.”

“It definitely presents an opportunity,” he said. “And you have to consider the fact that within 20 years from now, how renting a property will compare to owning a property with that fixed interest rate.”

When Does Refinancing into a 15-year Mortgage Make Sense?