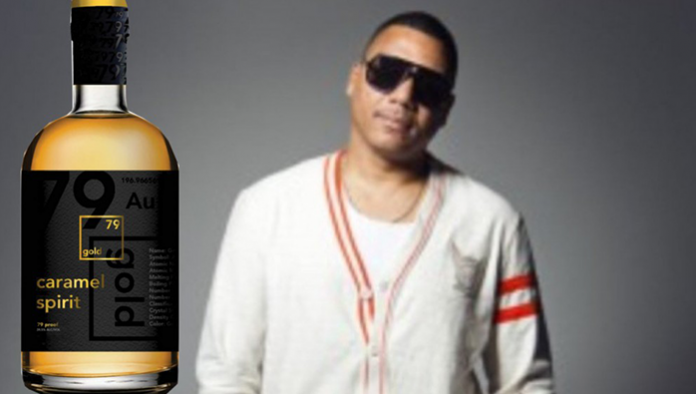 Rich Trowers (aka Rich Dollaz), CEO of Dollaz Unlimited and cast member of VH1?s Love & Hip Hop: New York, is popping bottles these days. His own bottles, that is.

The music manager/producer, who was born in Connecticut; attended Fisk University; and worked at P. Diddy?s Bad Boy Records, had a bottle signing in July to showcase the expansion of his new liquor, 79Gold Caramel Spirit. Launched in 2014, the line is now available in stores nationwide. A brand of cognac, 79Gold is described as ?a precisely calculated blend of sweet caramel and rich vanilla.?

We?re excited for Trowers and his newfound distribution deal for 79. And in a recent interview, we talked about the deal, but also took the opportunity to pick his brain about the current state of the ever-changing music industry.

TNJ.com: When and how did you get into the music business?

Rich Trowers: I got back into the music game in 2002. I had interned at Bad Boy when I was in college. And when I graduated, I came back to NY and started working at Bad Boy. I worked doing various things. It was a small, boutique label and was one of the best experiences because working there I got a chance to do a lot of everything. I was able to work with marketing, in the studio as well as promotions and meet a lot of deejays, so it was one-stop shopping for someone trying to get into music.

TNJ.com: How has the music business changed from when you first got into the game?

R.T.: It?s a totally different industry now. It changed around 2006-2007. That?s when MySpace and Facebook. At that point, the record labels decided they didn?t want to spend money on artist development; they want you to come in with a buzz, with social media presence. You create your own fan base, get a record and then come back to the label. They would rather chase your project; chase the momentum that you created. Then they?ll throw money at it and get behind it, as opposed to spending all that money on marketing and promotion.

TNJ.com: What are the challenges that come along with being a music producer/manager???

R.T.: Monetarily speaking, if you?re a producer, you want to work with people who have projects coming out because that?s how you get your money, your publishing. Publishing is received when an album or song is released domestically or worldwide. A lot of producers are now taking artists, giving them the tracks, and hoping to get that artist signed, based on quality music and creating a buzz. So those are the two different ways.

But the other side of that is to go and create an artist, give that artist quality music, walk that artist into a label and hope the label signs the artist. Then you have another way to get revenue, which is by bringing an artist to the table.? That?s a little bit more difficult and financially-imposing from the beginning because now, not only are you giving someone tracks, but you?re giving someone tracks that you could be selling to another person.? That?s number one. Number two is that you have to hope that this artist you believe in, you can make others believe in. At times that?s difficult. For every Tinashe, there are a hundred artists who don’t make it. Either way, it?s a gamble.

TNJ.com: What is your take on 360 music contracts? Who benefits more between the artist and the label??

R.T.: The label benefits. Record sales are down so much – 65 percent over the last 10 years. The label has to find a way to create revenue. So with the 360 deal, they get a part of your publishing, royalties, hostings, concerts and everything that you?re doing. So, if you get a makeup contract, the label gets a part of that because record sales are down so much, music is basically becoming just a marketing tool for the creation of your brand. If you?re a musician, a singer, a beautiful young girl, and people are going crazy for you and social media era has made it so that you can get endorsements and do things of that nature, the label is now saying, we don?t even care about the music anymore. We just put out a project just so you can remain in development but the real money comes from all of these other things. We?re not making any money but we?re spending a boatload of money on your marketing, promotions, tours and all this stuff we?re working on but yet you?re going to go out there and catch a $20 million deal from Revlon or a $15 million deal from a liquor company. Now all of a sudden, they?re questioning why they?re doing this. So the management gets 20 percent regardless of what you do. That?s always been the standard management contract. The artist is giving up all of this, so the label is the only one that reaps the benefits if in fact something hits for you.

TNJ.com: What advice do you have for young people who aspire to be music producers? What should they do first?

R.T.: My advice is to look at the landscape and see what?s going on in the game ? first and foremost. The music game is a dying game. Make sure you want to do it understand the repercussions of your decisions. It could be years before you make any money. There could be years of sleeping on someone?s couch or in someone?s basement. You would be gambling on yourself for something that may never pop off for you. With that being said, do your due diligence. Check it out. Make sure you understand exactly what you want to do and go for it. But at the same time, there could be limitations. I don’t suggest anybody try it until they?re 50 years old.

TNJ.com: How did you decide to branch out into liquor branding?

R.T.: Working at Bad Boy was the best thing that happened to me because I got a chance to work in different capacities on a bunch of different things. So I was part of the Ciroc team. I worked with Shawn Prez, Dia Simms and a few other people who spearheaded the Ciroc movement at Bad Boy. And with Bad Boy being a small label, it was all hands on deck for everything we do. So once Puff?s liquor was out, they said they needed me to start marketing it and add it to my musical stuff.

So having had the experience, seeing how much revenue it generated, and actually being a part of it, I figured why not go out and do my own thing. It?s always amazing to work with someone who is as fresh and dope as Puff, but at the same time, you want to own something for yourself. So, we went to Idaho, where 79 Gold was created, and obviously 79 AU is the atomic element for gold which is how we came up with the name. And a year later, we?re on the market.

TNJ.com: What are your short-term goals whether for the liquor branding or anything else on your plate????

R.T.:?? 79 Gold is taking up most of my time right now, and I absolutely want to take it to the next level. It?s a process.? And we?re not like other brands. This is a ?just created? drink. If you look at VS vodka.? It?s been around for 10 years.? It?s been on the market. Ciroc has been on the market. Diageo owns Ciroc and they said they wanted to bring Puff in and use his marketing expertise to make something pop. So they took a liquor that was dusty and on the shelf. And they said it was a good, quality brand but it’s not doing anything, so they wanted him to put his name and muscle behind it.

7 years later, they?re selling 5 million to 6 million cases a year. $100,000. That?s what I want to do with 79. I want to put the muscle out there and get it in stores. We?re picking up states every day and doing a great job with that. I want it to be a nationally sold spirit in all of the liquor stores, clubs and restaurants. And then we?ll re-assess and go from there.

TNJ.com: What effect has the Internet had on the music industry? Has it made it harder or easier for an artist to be successful??

R.T.: The Internet has made things easier for the artist, but it has killed record labels. It has created a place where artists can go and release music for free so for the artist it helps. But for the label, you’re giving away music, which is an oxymoron when you?re in the building. The labels spend money to make money. Hopefully, they can give you $250,000 to create an album and they would hope to make $5 million dollars. But when you?re out here giving it away for free, it helps you with your buzz, your touring, and everything you?re doing within the confines of your little artist world, but it?s not helping the label. That?s why the 360 deals are so important now.

TNJ.com: Has the success of your role in Love & Hip-Hop: New York translated to success in your music career?

R.T.: Absolutely. Reality TV is give and take. In order for you to be in scenes, you have to have turn up. People get mad at you because you?re exploiting the game. They think you?ve sold your soul to the devil for popularity. But I don?t care about what people think of me. It?s give and take. When I was ?that guy? at Bad Boy, it was a different level of popularity. I was a music manager. But people get annoyed with me and don?t realize that Love & Hip-Hop only follows one segment of my life.

TNJ.com: Will you be back for the next season of the show?

R.T.: Actually, I?ll be on Love & Hip-Hop: Hollywood, which begins on September 7. And then I?ll be back on the New York show when it?s back on in November.