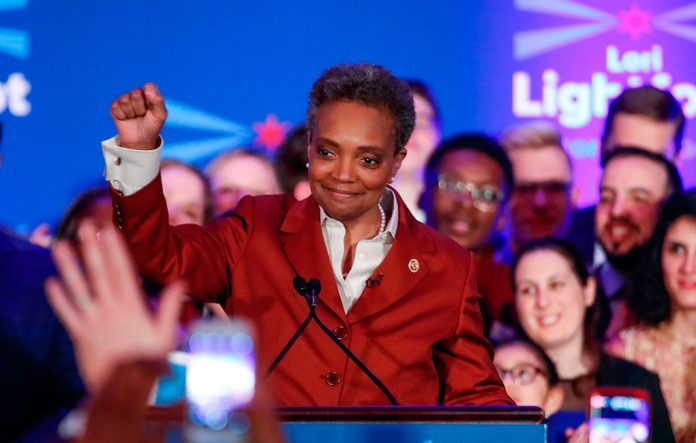 Lori Lightfoot was sworn in as Chicago mayor Thursday, becoming the first black woman and the first openly gay person to hold the office in the city’s history.

“For years, they’ve said Chicago ain’t ready for reform. Well, get ready because reform is here,” Lightfoot, a former federal prosecutor, said. “I campaigned on change, you voted for change, and I plan to deliver change to our government. That means restoring trust in our city’s government and finally bringing some real integrity to the way this city works.”

Campaigning as a long-shot first-time candidate, Lightfoot pledged to dismantle Chicago’s “broken and corrupt political machine” and end what she called unchecked aldermanic power over matters in their wards.

On her first day in office, Lightfoot signed an executive order limiting so-called aldermanic prerogative over matters such as permitting and licensing — the first of many conflicts as she seeks to fulfill her signature campaign pledge to “bring in the light.” During her speech, the new mayor said aldermen would still have a voice in what goes on in their wards.

“This does not mean that our aldermen won’t have power in their communities; of course they will. It does not mean our aldermen won’t be able to make sure the streetlights are working or the parking signs are in the right place or any of the thousands of good things that they do for people every day,” Lightfoot said. “It simply means this — it means ending their unilateral, unchecked control over every single thing that goes on in their wards. Aldermen will have a voice, but not a veto.”

Lightfoot signed an executive order banning city departments from deferring to aldermanic prerogative “in their decision-making practice unless expressly required by the Municipal Code of Chicago.”

Each department must create a 60-day report to the mayor describing their historical decision-making practices, including when they’ve deferred to prerogative “as a matter of custom or practice,” and all steps they took to enact the executive order.

The move is a precursor to further actions dealing with aldermanic power over Zoning.

While much of Lightfoot’s speech focused on making Chicago a safer, more equitable city, it also evoked some of the most intense reactions during the portion dedicated to fighting public corruption — a topic which she introduced with a joke.

“Putting Chicago government and integrity in the same sentence sometimes may seem a little strange,” Lightfoot said. “But, friends, that’s going to change. It’s got to change.”

“The family with the bungalow, the lady who runs the hair salon, the guy who owns the store on the corner — they aren’t powerful or big or well-connected, but they end up paying when our government is corrupt,” Lightfoot said.

Lightfoot also put pressure on the city’s aldermen to support her reform proposals.

“These practices have gone on here for decades and this practice breeds corruption. Stopping it isn’t just in the city’s interest. It’s in the City Council’s interest,” Lightfoot said before turning to face the aldermen seated behind her onstage.

Lightfoot delivered a line that would seem obvious in most cities, but not Chicago, declaring: “No official in the city of Chicago elected or appointed should ever profit from his or her office. Never. Ever.”

“This requirement that people must give more to access basic city services must end,” Lightfoot said. “And it will, starting today.”