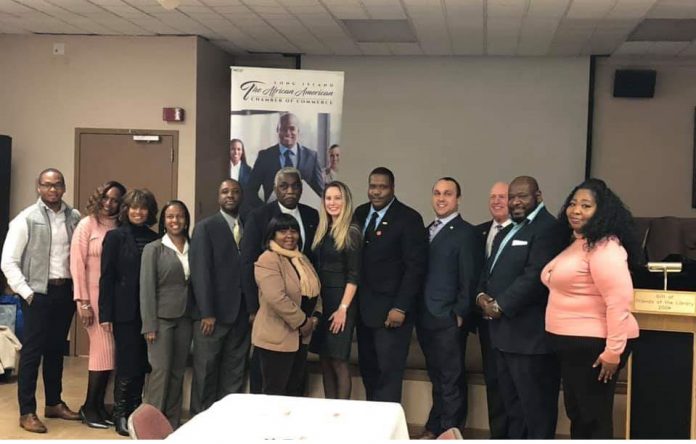 The Long Island African American Chamber of Commerce, Inc., New York State’s largest of its kind, established a partnership with Customers Bank to facilitate access to federal funds that will help its members and other local small businesses survive during the Covid-19 pandemic.

The chamber’s decision to partner with the bank came after chamber officials found that a staggering number of local businesses were erroneously prevented from applying for the U.S. Small Business Administration’s Paycheck Protection Program (PPP) loans because they were sole proprietorships.

While researching the issue, chamber officials found that sole proprietors who report income and pay taxes on a Schedule C in their personal tax return, as well as independent contractors who collect 1099-MISC forms, were able to participate in the PPP program if they submitted a Schedule C, instead of 1099s.

“The Long Island African American Chamber of Commerce, Inc., realized that to help a larger number of small businesses in the community access the federal stimulus they need to keep employees on the payroll or protect their sole source of income, the chamber needed a trusted partner that could provide an elegant PPP process,” chamber president Phil Andrews (above, fifth from left) said.

“We needed a reputable bank that would enhance our ability to provide essential services to our members and our wider network of African American small business owners,” added.

Customers Bank, a subsidiary of Customers Bancorp, Inc., seemed a good fit. It was ranked among the top-five PPP lenders nationwide, thanks to its participation in more than 100,000 SBA-approved PPP loans that had an aggregate value of over $5 billion. The bank was also nationally recognized as having the second-lowest average loan size of the nation’s major PPP lenders.

“We essentially put together a white-label program where Customers Bank will handle end-to-end PPP processing, funding and servicing, including forgiveness. There’s no technology integration and no fee for participating organizations,” stated Sam Sidhu, the bank’s vice chairman and chief operating officer. “This was a very deliberate decision to assist more small business owners with accessing the federal stimulus available to them by supporting the lending activities of other organizations.”

Miguel Alban, senior vice president and director of multicultural banking at the bank, said, “We are proud to help support important community and economic development organizations in many of the underserved communities across the nation, such as the Long Island African American Chamber of Commerce. Together, we are making sure that underrepresented minority and women-owned small businesses have access to the federal stimulus to help sustain their livelihoods and that of their employees during the economic recovery.”

Prior to the pandemic, the chamber launched its Retool, Refocus, and Rebuild Black Business Campaign. As a result of its partnership with Customers Bank, it was able to assist numerous entrepreneurs that were underserved in the first rounds of the PPP loans.

“We know our road to recovery as a business community would be much more difficult without establishing partnerships such as the one we have embarked upon with Customers Bank,” Andrews said. “Together, we are looking forward to helping many more small businesses than either organization could achieve on their own.”