Home Lifestyle Letter From An African Immigrant To His U.S.-Born Son 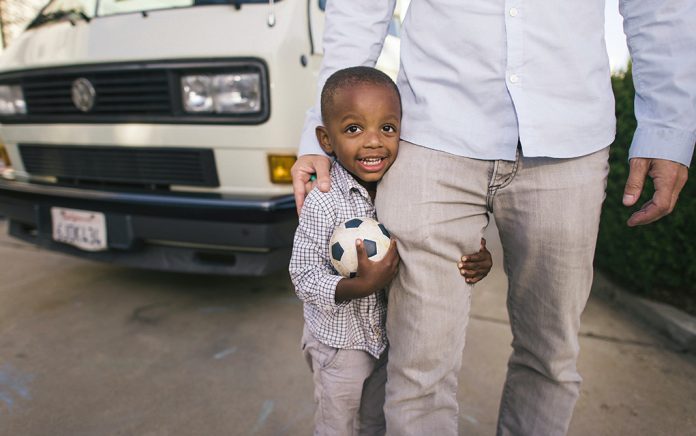 Your smiling face will stick in my memory for eternity. Your first baby steps and your funny ways of pronouncing words bring me immense joy. You bring so much happiness to the family in these tragic times.

Son, you offer countless glimmers of hope. Your presence here is much too dear.

Kahari, despite all the chaos around us, you echo a series of human joy, both ancient and precious.

For many immigrants like your mom and me, our place in this country isn’t guaranteed. Long before we migrated from Ghana, we were convinced that America, beautiful America, was the only place in the world where all dreams were achievable.

We fled the harsh economic crisis in Ghana to seek the American dream in the Bronx, New York. Your mom, Aisha, a first-class graduate in English from Ghana’s premier university, the University of Ghana, had high hopes of making it here.

I didn’t have to persuade her to get on the plane. Just like me, she had seen all those inspiring and fascinating American movies and read speeches by Abraham Lincoln, John F. Kennedy, the Rev. Martin Luther King Jr., Bill Clinton and other American icons.

I have vivid memories of her following the news on CNN, sitting on her old, much-cherished couch in her little living room, and making notes of unique phrases used by the news anchors.

I fell in love with your mom, not because of how luminous her black skin is or how calculated each of her steps touches the holy ground. Her choice of words was a crucial factor. I could listen to your mom talk all day. Even her friends had enormous respect for her because she was so well-read and could contribute to any discussion of any subject.

Your mom still is a living storehouse of knowledge.

At university in Ghana, Aisha was one of the few people in Volta Hall with a big bookshelf filled with classic photos of global leaders and newspapers dating back to Ghana’s last coup. Her room could have qualified as a knowledge hub in those days.

Now, she cleans the homes of wealthy Wall Street stockbrokers and tutors their privileged children who likely will never understand what it means to be a Black immigrant in America.

Being Black in America means constantly being reminded that you will never completely “fit in,” so you should be mindful of the neighborhood you find yourself in and of your actions and words. These normal exercises of moving around, speaking freely and carrying out ordinary actions – all of which we enjoyed back home in Ghana – we cannot take for granted here because of our race and color of our skin.

It is only in America that I have come to fully understand the expression, “the color of your skin.”

In America, the country of your birth, people like your mom have asked only to be treated with dignity, respect, and human empathy. These are intangibles that every living being in the world deserves. We would never have to ask for these things in Ghana because they are automatically granted. It’s an understanding that you can almost feel in the air.

However, people leave their home country for greater opportunities in another. People want to be able to work toward fulfilling their dreams. For us, it was “the American dream.”

What is a man if he can’t at least make some sacrifice in order to achieve his dreams and improve the lives of the people who depend on him?

My good boy, in America there are so many young men who have been cut down in the prime of their lives by police bullets because of their race. The victims aren’t just Black Americans. African immigrants suffer the bullets, too.

African immigrants who come to the US to get an education and be successful in order to support their families back home also experience this deadly police brutality. The lives of our young men with dreams and hopes, too, are cut short at the sound of a bullet.

Pardon my choice of words, Kahari, but some of the killings are utterly devilish. Some young men are choked to death; others are shot 41 times. Many never get the justice they deserve. And numerous families are still in grief.

In a country that prides itself as a democracy and advocates for human rights around the world, why should anyone be denied the right to breathe? Everyone on the face of this earth is entitled to air. The government doesn’t control air, neither does the police. But recently, Black men in America have been denied the right to breathe when in the custody of racist and indisciplined police officers. Most of these men have lost their lives.

Kahari, it’s never the wish of parents to see their child slip away from the world in such circumstances. It’s beyond heartache. Words cannot describe the anguish.

I’ve been in America for a decade and more and it’s heartbreaking to confess to you that this country isn’t all that beautiful, son. It’s not that safe, despite all the technology it has put in place, and it’s not that peaceful as well.

You will ask, then, why we decided to raise you here. Son, amid all the chaos there’s always a significant moment of happiness, a reason to smile, an opportunity to stay hopeful and optimistic.

Aisha and I have always known you to hold that kind of significance. It was evident when you came through here on that solemn memorial morning on September 11, 2019, when millions around the world were grieving with parents and friends whose loved ones were wiped off the face of the earth on that same day in 2001 by a terrorist attack that forever changed the notion of security.

Your birth reminded us that even on the worst day, life is a pretty spectacular thing.

Honestly, sometimes we’re afraid for the future of this country. Everybody worries about the future. But everything is going to be okay.

As I write to you, the world is battling a health crisis. A pandemic has affected the entire globe. It’s caused countries to shut down. It’s had a toll on global economies and, with half of our faces covered, no one can deny that it’s changed our appearance as well.

Yet, the brutalization of Black men by thugs in police uniform hasn’t changed. Just as he failed to take the necessary steps to fight the virus that caused the pandemic, our president has failed at this as well.

Still, nothing made me more optimistic in the difficult year that was 2020 than the activism we saw in the wake of George Floyd’s death in Minnesota after a white police officer knelt on his neck until he could no longer breathe.

The good people of this nation and beyond came out to join the global protest against this inhumane act by the police because they understood that it takes decent human beings to stand up and say, “enough is enough,” and that “Black Lives Matter.”

All around the world, in Ghana as well, people joined in numbers rarely seen a movement inspired by young activists to drive home the point that Black lives matter.

This was the mood of the season.

Kahari, as you grow up I hope you understand that everybody is born equal, and that to judge someone by their race or religion is disgusting. Donald Trump has made many believe that the only way America can be great again is by getting rid of the people who he feels do not belong here.

The people that “don’t belong” want a better life in a better country with better opportunities than back home to make things right for themselves and their families.

Son, in this world everyone should belong, no matter his or her race or beliefs.

My parents, who were raised in modest homes by hardworking, disciplined families built on values such as hard work, humility, and respect for each others’ views, gave up their dreams so that my siblings and I could have our dreams. The sense of family is so strong back home in Ghana that if one gets lifted up, everyone is lifted up.

So everyone wants me to do well. And I want to do well for them. It is this same sacrifice I’m making for you. We all come from a long chain of human survival that continues by each person doing for another in the belief that more lives will improve and our family legacy will stretch long and strong forever.

A lot happened in our world many centuries before your birth and a lot more will happen even now and in your lifetime, Kahari. However, I want you to promise me you will not despair.

It’s hard to be the father of a son these days. It’s tougher to be your father in this space because you deserve a whole lot better than the fears Aisha and I have for you. We console ourselves with the hope that there are good people who are always willing to help out. I hope they come your way. I also believe you will do for others the way the people around you have done and will do for you.

Like many others, I believe it can be better and that’s why I continue to join the peaceful demonstrations and make my voice heard. Until we are all free, nobody is free.

With all my heart,

This Caribbean Getaway is So Laid-Back There’s Not a Single Stoplight...