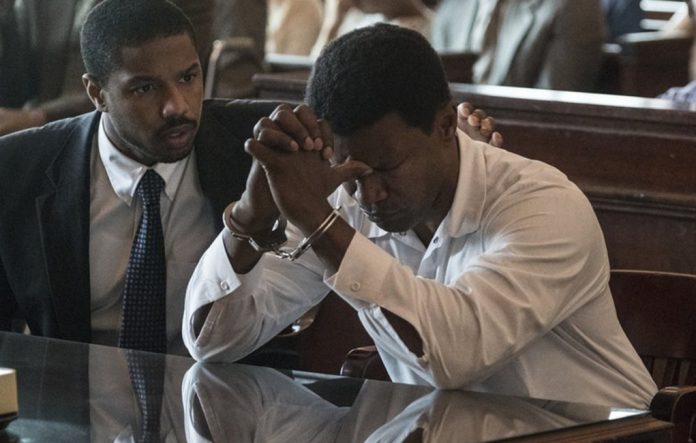 At its beating heart, “Just Mercy” is a story of what happens when people care. In its opening scenes, set in 1980s Alabama, a Black man named Walter McMillian (Jamie Foxx) is driving home from work when he is stopped by police, arrested and charged with a murder he didn’t commit. The movie fast-forwards rapidly through McMillian’s sham of a trial, noting that he was put on death row before the trial — a day-and-a-half long — even took place; we next see him nearly two years later in a penitentiary visiting room, waiting for a meeting with a young lawyer who, McMillian was certain, couldn’t help him. “All that matters,” McMillian says, “is I look like a man who could kill somebody.”

Luckily for McMillian, Bryan Stevenson (Michael B. Jordan) was not just any young lawyer. As all who’ve read the real-life Stevenson’s bestselling memoir know (the movie shares its title), he was a Harvard Law School graduate with a dream: to help the unjustly accused on death row. He saw bias in the legal system, against the poor and against racial minorities, and, wanting to make a difference, he set up shop in Montgomery, Alabama, founding the Equal Justice Initiative. McMillian, meeting him that day, just saw an idealistic young man; gradually, he came to realize that Stevenson had the kind of never-giving-up determination that can move mountains.

“Just Mercy” the movie unfolds slowly, showing us how Stevenson, with his colleague Eva Ansley (Brie Larson, vivid in an underwritten role), fought for McMillian and other men on that Alabama death row. Director Destin Daniel Cretton (“The Glass Castle”) keeps the pace deliberate and simple; there’s a plain-spokenness to the filmmaking that feels appealingly old-fashioned, even as the dialogue is occasionally stilted. And while, even if you haven’t read the book, there’s a sense where things are going, the film has an unexpected emotional wallop in Foxx’s masterfully still performance — he plays McMillian as a man so quiet you don’t quite register the extent to which he has been broken.

Despite its flaws, “Just Mercy” is that rarity — a movie that inspires; a story that brings light. “Hope,” says Stevenson, in a moving voice-over at the end accompanying some real-life footage, “allows us to push forward, even when the truth is distorted by the people in power. It allows us to stand up when they tell us to sit down, and to speak when they say ‘be quiet.’”