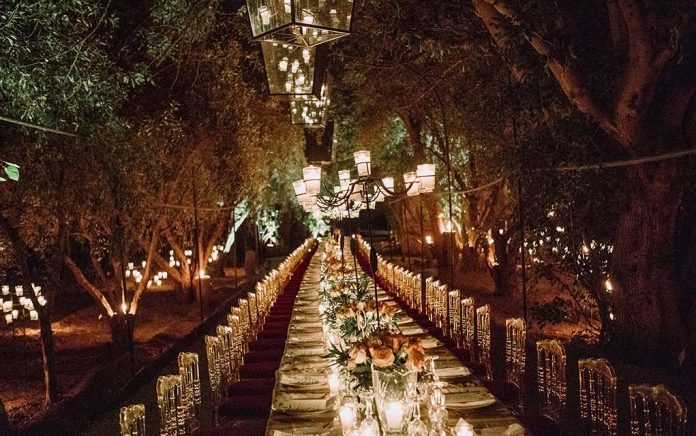 International tastemaker and proprietor Meryanne Loum-Martin is responsible for the hotel’s spectacular interior design that has been lauded in such tony publications as Town & Country and Architectural Digest. The hotel opened on December 27, 2001, with a full house. Its signature dinner setting is pictured above.

Loum-Martin also penned “Inside Marrakesh: Enchanting Homes and Gardens,” with photographs by Jean Cazals. The book showcases the breathtaking properties of the world’s leading design connoisseurs, including Jasper Conran, Lynn Guinness, Vanessa Branson, and Helen and Brice Marden, who have blended Marrakesh’s exotic style into unexpected but charming expressions. After 10,000 copies, the book went into a record time in a reprint.

TNJ.com: What made you decide to open a hotel?

Loum-Martin: I used to be a lawyer in Paris, where I am from. I was always passionate about architecture and design, and Marrakech gave me the opportunity to do a project, then a second, then a third. I was between Paris and Marrakech for 10 years and then left Paris in 1996 for good. As I had to turn my projects into a source of revenue, it led to hospitality.

TNJ.com: So you are not Moroccan?

Loum-Martin: Not at all. My mother was from the Caribbean and my father is from Senegal, but Paris had been home for over a century on my mother’s side, as my great grandfather, also a lawyer, was elected to French Congress to represent Guadeloupe, which is French. Since 1908, my maternal family was very much in Paris. Marrakech is the most beautiful spot three-hour flight away, so this is what attracted me.

TNJ.com: Have you faced many challenges being a female in the industry?

Loum-Martin: Challenges are constant, but who does not have challenges? There are challenges not linked to gender or race, the type that anyone would face, like surviving during Covid when you are in this business.

Then there are challenges linked to gender, like working on a construction site, when you are a self-taught architect convincing the real architect, a male, that the place will be built according to your sketches and not his ideas; that he has to put your sketches into a professional format to get the authorization and planning consent.

Then you have the challenges linked to being a Black female. On this, I am lucky to have a very strong shield. I was always the youngest in school and the only Black student. I was also always elected head of the class and no one ever bullied me, nor did I accept that anyone would be bullied. I am also a fourth generation lawyer, so it runs in our blood on both sides to stand up for justice, freedom, respect, and dignity.

So racism was more with people I did not know, like someone trying to get ahead of me at the post office, or a salesperson ignoring me in a shop. I don’t think they ever did it again to any Black person after, as I would calmly and strongly speak up in a pretty devastating way. I was an award-winning lawyer representing the Paris Bar in international competitions, so they really had no luck if they were trying micro-aggressions with me. Very calmly, but in a way that I was heard by everyone in the room, I made them feel like going into hiding.

TNJ.com: What has been your biggest business challenge?

Loum-Martin: Finance, finance, finance. I am creative and think out of the box. I never met one banker who understood, except once, how I could do my hotel. But if I had had proper finance, I would probably support hundreds of families now instead of forty.

TNJ.com: And how have you overcome that challenge?

Loum-Martin: Working very very hard. Being extremely creative, I host and design regular cultural events, we are not about selling room nights but creating experiences of a lifetime. But for the next project that I want to do, and for which I have all the data to believe that it will be very profitable, I have still not been able to raise the finance. So the challenge is not fully overcome.

TNJ.com: What do you enjoy most about being a business owner?

Loum-Martin: Being my own boss, being able to be very creative, meeting and befriending extraordinary people. With this freedom comes a lot of responsibility and risk, though. But I would rather be an accidental creative and passionate hotelier in this gorgeous oasis than a stressed lawyer in a big city!

What US Travelers Need to Know Before Traveling to Cuba

What US Travelers Need to Know Before Traveling to Cuba