TOKYO (Reuters) – An overwhelming majority of Japanese companies say they will raise wages at a slower pace than they did last year, a Reuters poll found, stymieing Prime Minister Shinzo Abe’s attempts to boost the sluggish economy through higher wages and consumption.

As Japan’s annual “shunto” wage hikes kicked in this month, the Reuters Corporate Survey found that only 19 percent of businesses said they would raise monthly wages by 2 percent or more, versus the 2.14 percent average hike at big firms seen last year.

The figure combines the automatic pay increase from Japan’s seniority-based employment system, in which salary rises incrementally each year, with an additional hike in base wages.

This is the first broad survey gauging corporate Japan’s stance on wages after most major firms on March 15 announced the results of their wage negations with unions, offering the lowest base pay hike in four years of about 0.3 percent.

In the monthly poll, conducted March 7-21, 63 percent of companies said they would raise wages 1-2 percent this year while 18 percent said gains would be less than 1 percent.

The survey showed 42 percent of firms plan no base pay hike at all this year. Some 40 percent plan to raise base pay less than 1 percent, with just 18 percent projecting an increase of 1 percent or more.

Exports will support Japan, the world’s third-largest economy, “but we cannot count on domestic demand,” he said.

The survey, conducted monthly for Reuters by Nikkei Research, polled 531 big and mid-sized firms. Around 230 answered questions on wages.

Since Abe returned to power in late 2012 with a pledge to reboot the moribund economy with a mix of stimulus policies dubbed “Abenomics,” he has urged companies to lift wages, hoping that would drive a virtuous growth cycle.

While companies responded by raising base pay for four straight years, the gains have been minimal – despite sitting on piles of cash.

In written comments, many businesses say they cannot afford to lift wages, and others say they are raising salaries to attract workers amid a labor crunch as Japan’s population shrinks.

“We have no choice but to raise wages due to labor shortages. But the situation is quite tough considering the future,” said a manager at a machinery firm in the survey, which companies responded anonymously.

The survey also found that slightly more than half of businesses are accepting foreign workers even though Japan has a restrictive immigration policy, particularly for unskilled labor.

Still, two-thirds of companies say they are reluctant to hire unskilled foreign workers with many citing language, cultural and legal barriers.

For a graphic on how Japan firms are reluctant to boost wages click http://fingfx.thomsonreuters.com/gfx/rngs/JAPAN-COMPANIES/010040B20NV/japan-corporate-wages.jpg 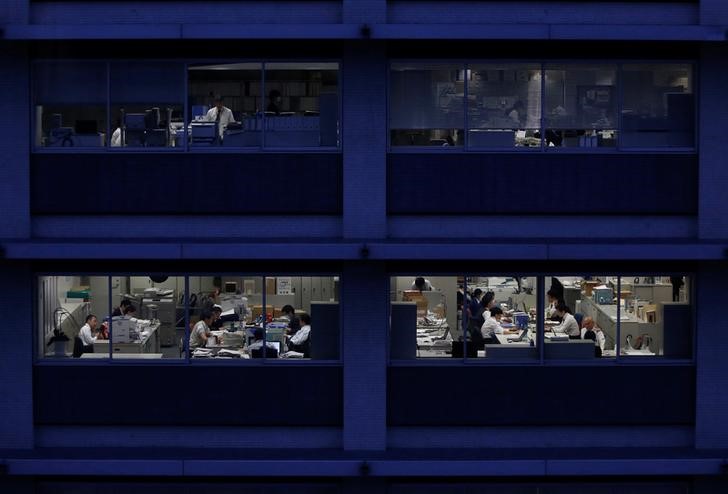