But New Delhi rebuffed Beijing’s diplomatic push, incensed that a key project in its massive initiative to open land and sea corridors linking China with the rest of Asia and beyond runs through Pakistani controlled Kashmir.

The failure of China’s efforts to bring India on board, details of which have not been previously reported, shows the depths to which relations between the two countries have fallen over territorial disputes and Beijing’s support of Pakistan.

India’s snub to the “Belt and Road” project was the strongest move yet by Modi to stand up to China.

But it risks leaving India isolated at a time when it may no longer be able to count on the United States to back it as a counterweight to China’s growing influence in Asia, Chinese commentators and some Indian experts have said.

Representatives of 60 countries, including the United States and Japan, travelled to Beijing for the May 14-15 summit on President Xi Jinping’s signature project.

But Ram Madhav, an influential leader of Modi’s ruling Bharatiya Janata Party (BJP) involved in shaping foreign policy, said India could not sign up so long as the China-Pakistan Economic Corridor (CPEC) – a large part of the “Belt and Road” enterprise – ran through parts of Pakistan-administered Kashmir that India considers its own territory.

“China routinely threatens countries when it finds issues even remotely connected to its own sovereignty question being violated,” Madhav said. “No country compromises with its sovereignty for the sake of trade and commerce interests.”

India, due to the size and pace of expansion of its economy, could potentially be the biggest recipient of Chinese investment from the plan to spur trade by building infrastructure linking Asia with Europe, the Middle East and Africa, according to a Credit Suisse report released before the summit.

Chinese investments into India could be anything from $84 billion to $126 billion between 2017 to 2021, far higher than Russia, Indonesia and Pakistan, countries that have signed off on the initiative, it said.

China has not offered any specific projects to India, but many existing schemes, such as a Bangladesh-China-India-Myanmar Economic Corridor that has been planned for years, have now been wrapped into the Belt and Road enterprise.

China is also conducting feasibility studies for high-speed rail networks linking Delhi with Chennai in southern India that would eventually connect to the modern day “Silk Road” it is seeking to create.

But if India continues to hold back from joining China’s regional connectivity plans the commercial viability of those plans will be called into question, analysts say.

China has held talks with Nepal to build an $8 billion railway line from Tibet to Kathmandu, but it ultimately wants the network to reach the Indian border to allow goods to reach the huge Indian market.

India has other worries over China’s growing presence in the region, fearing strategic encirclement by a “string of pearls” around the India Ocean and on land as China builds ports, railways and power stations in country such as Nepal, Sri Lanka and Bangladesh.

Ashok Kantha, who was India’s ambassador to China until 2016, said India had repeatedly conveyed its concerns to China, especially about the China-Pakistan Economic Corridor and the need to have open discussions about it.

“Where is the economic rational for CPEC?” he said. “There is no major economic driver, the drivers are essentially political and strategic in character.”

Just a week before the summit, China’s ambassador to India, Luo Zhaohui, offered to change the name of CPEC to placate New Delhi and ensure it didn’t boycott the Beijing conference.

Luo did no elaborate on the proposal, made during a speech at an Indian military think-tank, according to people who attended the meeting and local media reports. A transcript released later by the Chinese embassy did not include a reference to changing the project’s name.

But Chinese officials in the past have suggested this could mean adding India to the name to make it the “China-Pakistan-India Economic Corridor”.

A Chinese diplomat, speaking on condition of anonymity, suggested India could build infrastructure on its side of Kashmir which could eventually be linked to the roads and power lines China planned to build in Pakistani Kashmir.

Indian experts said another proposal explored in meetings between former diplomats and academics from the two sides was renaming the project the “Indus Corridor” to overcome India’s objection that the “China-Pakistan” name endorses Pakistan’s claim to Kashmir. Pakistan and India have fought two of their three wars over Kashmir, which they both claim in full.

Chinese Foreign Ministry spokeswoman Hua Chunying did not comment directly on any offer to change the name of CPEC, but drew attention to President Xi’s remarks during the summit that China would follow the principle of peaceful co-existence and that New Delhi need not worry.

“I think the concerns from the India side should be able to be resolved,” she said.

Indian Foreign Ministry spokesman Gopal Baglay said New Delhi had not received any suggestions through proper channels and that India wanted a meaningful discussion with China on the whole project.

(To view a graphic on ‘China-Pakistan Economic Corridor’ click http://fingfx.thomsonreuters.com/gfx/rngs/1/180/269/PAKISTAN-CHINA-SECURITY.jpg) 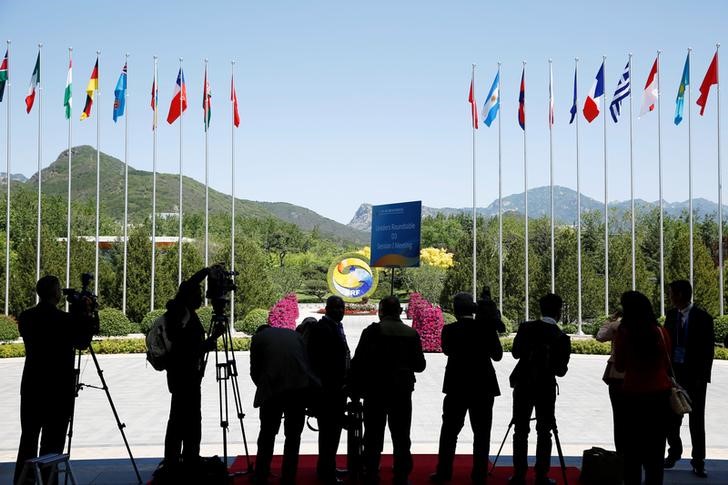