Home News Headlines In the Age of ‘Enemy of the People’ Rhetoric, Do Young People... 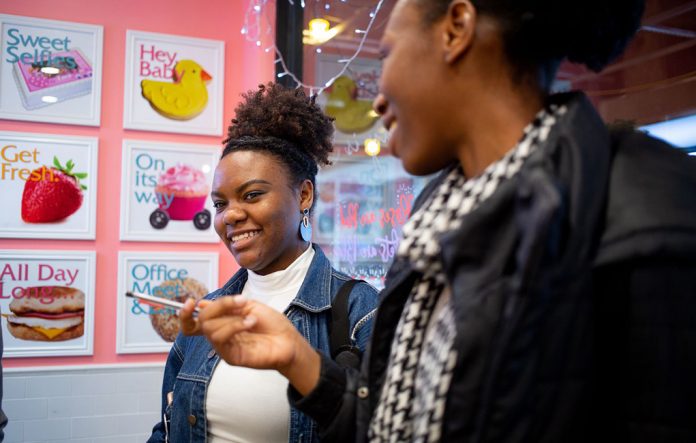 Emily Erdos wanted to be a reporter so badly that she begged administrators at Princeton to allow her to study journalism — a major the Ivy League school didn’t offer. She was denied. “Too vocational,” they said.

But the Massachusetts native kept at it, and, along with a dedicated professor, eventually helped persuade faculty members to approve a formal journalism program, a first for the school. This year, she’ll be part of the inaugural class of students to graduate with an undergraduate certificate in journalism.

It’s an industry that’s being decimated by layoffs — from the tiniest weekly newspapers to the sexiest digital start-ups to the largest legacy conglomerates — and facing more distrust from the public than ever before, thanks in no small part to a president who has deemed journalists “the enemy of the people.”

Nonetheless, Erdos still wants to be a reporter — one whose work proves to critics how the work serves American democracy.

“I don’t see backing down as an option,” she said.

Interest in studying journalism hasn’t waned at the region’s top schools since Donald Trump’s election, and in some ways, criticism of the press may actually be energizing student journalists, students and faculty say. What’s different now is that an increasing number want to do more than report on problems. They want to solve them.

Look at Penn State, which has one of the largest communications schools in the region. Enrollment in the journalism program had declined steadily from 654 students in the spring of 2008 to 504 students in spring 2016. But those numbers have since bounced back, with 630 students enrolled in the program in spring 2018.

“Whether the president wants to do this or not, he is elevating the role of journalists in society,” said Marie Hardin, dean of the school’s Donald P. Bellisario College of Communications. “He is making them more important.”

Hardin said five years ago, prospective students and their families were worried there weren’t enough jobs in journalism. Today, she said, she hears fewer of those concerns and more excitement around “the role and impact that these young people feel they can make as journalists.”

David Boardman, dean of Temple’s Klein College of Media and Communication, said applications to the school’s journalism major are up this year after several years of decline (although the school didn’t provide figures). He said the response to the president’s attacks on the press are just a part of “a rebirth of awareness and commitment” to the idea of a healthy Fourth Estate, as young people witness the power of the press not only in politics but also in the #MeToo movement, which was largely driven by investigative reporting.

Boardman added that even in just the last 5 1/2 years since he’s been dean, students have taken more of an activist role, which reminds him of when he decided to study journalism in the 1970s in response to the Watergate scandal.

Hardin said that while the majority of students still want to do traditional reporting, an increasing number are coming to learn the skills without archetypal journalism jobs as the goal.

Although Lila McDermott, a senior journalism major at Temple, has loved her classes, she recently decided she wants to pursue law school so she can work in human rights or immigration. Working for the ACLU is the ultimate dream.

“I’m just looking around, and there are all these things I see that are so fundamentally wrong,” she said. “I want to not only bring light to that but be a part of the change.”

Her classmate Meghan Costa feels similarly. She’s a senior journalism major who’s thinking about studying psychology in graduate school. She said anti-press rhetoric motivates her to want to seek the truth — it’s the Trump administration, she said, that’s “spreading fake news” — and if she does pursue a career in journalism, it will be about more than telling stories.

“I want to feel like the work I’m doing matters and is making a positive impact,” she said.

Khanya Brann, a 22-year-old senior journalism major at Temple, has been writing since she was in middle school, and published work on a blog for a local organization for black girls. She wants to be a reporter after college, but the dream isn’t to cover the White House. She wants to tell stories about everyday people in underserved communities. Some of her favorite reporting is about women and minority-owned businesses.

“My calling is connecting with people and bringing stories to the forefront,” she said.

Among a group of students who edit the Centralizer, the student-run newspaper at Central High School in North Philadelphia, just a few are interested in pursuing journalism. One of them is Lynn Larabi, a 16-year-old junior and a news editor at the paper, who has written op-eds about climate change and environmentalism. She hopes to minor in journalism and sees it as a way to bring awareness to issues she sees as critical.

“I know it sounds cliché,” she said, “but changing the world is one of the big ‘things’ that I have. Not only should you benefit yourself in a future profession, but you should also be able to help the community you’re in to thrive, and journalism provides a voice to those who are unheard.”

That’s a very different view of the press than the majority of Americans have. A Gallup poll released last year listed U.S. institutions in order of respondents’ confidence in them. Newspapers and television news were at the bottom of the list alongside the criminal justice system and Congress.

That awareness has trickled down to student journalists, even those practicing in high school. Cyndi Hyatt, who advises student journalists at Conestoga High School’s paper, the Spoke, said students last year were dispatched to cover the parade after the Eagles’ Super Bowl win and were heckled by people yelling “fake news.”

Avery Maslowsky, a 17-year-old senior from Berwyn who’s the co-editor-in-chief of the Spoke, said “distrust in the media” after the 2016 election has made student journalists even more diligent about accuracy. She said her staff constantly worked to prove themselves as credible.

She plans to be a journalist after college, and is waiting to hear back from schools including Syracuse and Missouri, two of the top journalism programs in the country.

“People have the right to believe the media is untrustworthy. That just fires me up to want to prove them wrong for the future,” Maslowsky said. “Because if the adults aren’t doing it, then the kids can. And we will.”

Lot of Pope and Circumstance